You can’t say The Sex Pistols’ guitarist Steve Jones didn’t warn us. Right at the start of his gleefully coarse autobiography, Lonely Boy, he admits, “I’m not going to come out of this whole thing smelling like roses.”

In fact, he likens his experience writing the book to “that character in ‘Clockwork Orange’ who has his eyes forced open to make him feel shitty every time he remembers what a cunt he was.”

Cunt, it seems, is a term of endearment for Jones, as it has long been for a certain kind of earthy British male. Throughout Jones’ tome, he leans into the language of London’s street culture, peopled with “blokes” and “birds,” “nonces” and “ponces.”

In this jaunty world, Jones casts himself as a nearly illiterate, ADHD-afflicted Peeping Tom, as well as a kleptomaniac, drunk, and sex addict. It’s not a pretty picture but it’s certainly an entertaining one. It’s a tale told without censorship or self-pity—an apt representation for the man who, 40 years ago, created the revolutionary riffs for “No Feelings,” “Anarchy In The U.K.,” and “Pretty Vacant.”

Ribald stories lurch across every page, making Lonely Boy a must-read. Here are 30 craziest things we learn from Steve Jones’ book about his life—before, during, and after The Sex Pistols.

When his mom was away, Steve’s step-dad bullied him into jerking him off. He only did it once but, writes the author, “if his objective was to fuck me up, he’d achieved that, so why bother (doing it again)?”

2) As a kid, Jones worried about his penis size

What he calls his “little cock, with no hairs around it” made him wary around boys who’d matured faster. “It turned me into a basket case,” Jones writes.

3) As a teen, Jones started spying on other people having sex

He went down to “shagger’s row,” by the railway lines. He’d watch couples screw, and get so frustrated he’s throw giant rocks down on the cars while they were doing the deed.

He doesn’t consider himself a kleptomaniac, yet he does admit to waking up every day and thinking “what am I going to pilfer today?”

5) Jones used to sneak backstage and steal equipment. He even made off with David Bowie’s gear at his band’s historic, final “Ziggy Stardust” gig in 1973.

He believes that’s why the sound in D.A. Pennebaker’s documentary covering the show is so lousy. Regardless, Jones had no guilt over stealing his idol’s equipment.

6) In his youth, Jones became friends with later Pistols’ drummer Paul Cook. Soon they started to hang out with drag queens.

Despite their rough working class background, Jones and Cook were broadminded about guys who dressed as women. “They were like the underground crowd which was always where I felt closest to home,” he writes.

7) In the early ‘70s, Jones fell hard for Rod Stewart and The Faces

He loved that they were approachable at a time when rock bands were becoming more and more distant.

8) Due to his ADHD, Steve couldn’t concentrate enough to keep a job. Even when he had one, his mind was on sex.

At one job he has as a plumber assistant, he used a giant vacuum cleaner on his cock to jerk off. “It worked pretty well, as far as I remember,” Jones wrote.

While Rotten sees Malcolm as a “middle-class hippie idiot,” Jones saw him as a chameleon who just wanted to fit in.

Malcolm didn’t plan it all out, as he claimed, according to Jones. He believes Malcolm’s his real brilliance was to use potentially ruinous events to the band’s great advantage.

11 ) He was apathetic about the Pistols’ use of Nazi imagery

It more important to “shake things up than to worry about hurting someone’s feelings,” he writes.

12) The Pistols did NOT copy The Ramones

They did take influence from The Dolls and The Faces, but not from the CBGB crew. In fact, Jones resents the whole notion that the “Americans were here first.”

His least favorite on that scene? Patti Smith.

Specifically, he credits speed. Without it, Jones feels he never could have focused long enough to learn how to become Rolling Stone’s 97th greatest guitarist of all time.

15) Jones rates the relative sex drives of the Pistols members

As usual, Jones got the most tail, followed by Paul Cook. He says Rotten had no interest whatsoever. Even when Viv Albertine of The Slits gave him a blow job, he just complained that she was doing it wrong.

After she declined Jones’ offer for her to suck him off, he offered to perform oral sex on her instead. He thinks that makes him not just a gentleman but “a feminist.”

Because she’s a girl. She got the last laugh, Jones acknowledges, when The Pretenders became huge.

18) Why Jones is no fan of the indie record scene

He hates the whole idea of writing your own magazine or starting your own label. Counter to the punk esthetic, he was always a big fan of major label clout.

20) The negative effect Sid Vicious had on the Pistols

Because Sid couldn’t play, and since he did all he could to live up to his namesake, anarchy ruled within the band as much as it did outside of it.

21) Jones screwed all his bandmates’ girlfriends

22) Why Jones was zen about The Pistols’ demise

They were born to crash and burn, he believes. He compared the band to “those fucking idiots who win the football pools, then blow all the money and end up committing suicide.”

“Why take the Uber of addiction when a chaffer-driven limo scene is available?”

24) How Jones felt about Sid’s death

He didn’t have any feelings about his death—or about anything at the time. When a reporter rang him up about his response to Sid’s demise, Jones answered, “Well, at least we’ll sell some records now.”

25) Jones secretly pined to be in The Clash

He thought they seemed like much nicer guys who could laugh and act real. By contrast, he felt Rotten always had to be on.

Though he never breathed a word of it to the press back then, Jones used to go back to his place after playing with The Pistols and blast Boston and Journey records.

28) Rotten is a spoiled brat, which makes Pistols reunion tours a drag

Jones claims Rotten has surrounded himself increasingly with people who enable his most childish behavior.

There’s not enough money in it. 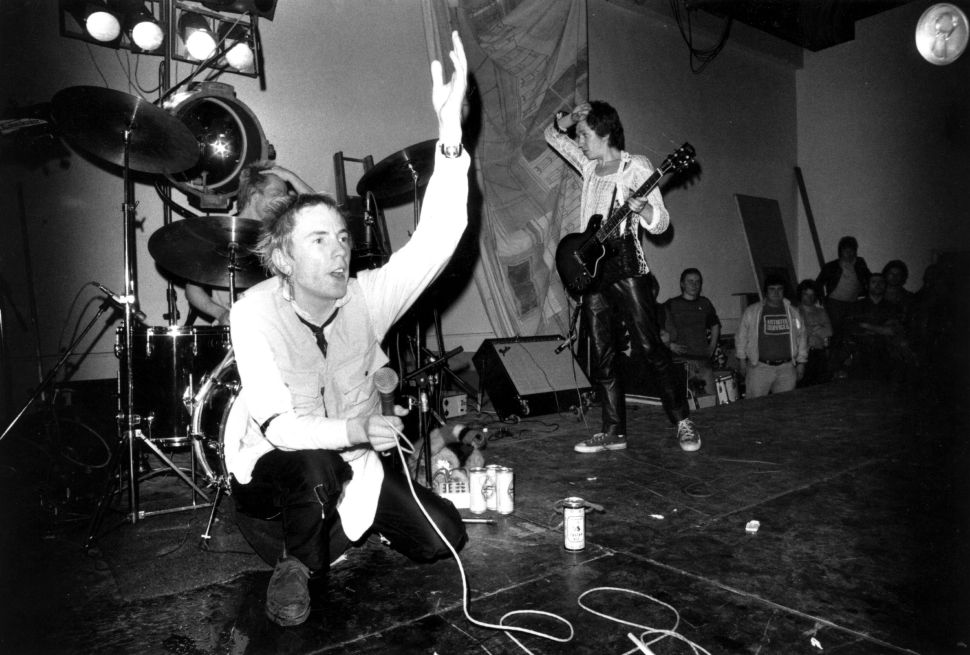