The Chicago Police Department has been slammed over its resistance to public accountability this week.

Yesterday, an attorney named Jerry Boyle brought a lawsuit against the police over the fact that his phone had been searched while he attended a protest on January 15, 2015, as Ars Technica previously reported. Additionally, the U.S. Department of Justice released a report today resulting from an investigation into the city’s police which it initiated on December 7, 2015. Justice described a pattern of civil rights violations at the Department.

In his case, now before a US district court, Boyle describes serving as a volunteer attorney with the Chicago National Lawyers Guild, a group that monitors lawful protest in order to provide pro bono counsel for attendees if necessary. He’s represented by the law firm Loevy and Loevy in the suit.

Both the suit and the inquiry dwell on the topic of the police department’s inscrutability. “Both involve failure to comply with the U.S. Constitution,” Matthew Topic, one of the attorneys representing Boyle, told the Observer in a phone call. “It’s a widespread problem. It’s not just about use of force and it’s not just about transparency.”

Topic has previously brought lawsuits against the CPD on behalf of similar clients, including one settled in October on behalf of Freddy Martinez, an activist who sought records about police surveillance. Boyle’s case references documents secured by Martinez, which can be found here.

Cell site simulators are known colloquially as “stingrays,” after a specific model made by the Harris Corporation (The Intercept has obtained instruction manuals for the devices). They are also sometimes referred to as “IMSI-catchers,” because one of the main features most of these devices share is the ability to command a device to report its IMSI, the identifying number that mobile carriers use to authenticate devices and provide them with service. Since most devices can be linked to a person’s account, IMSI numbers work well for tracking people.

“Cell site simulators do not operate against only a target phone; instead, they often force all cell phones within their geographical range, which can extend more than a mile from a device, to transmit personal data to the police,” Boyle’s suit asserts. In other words, even if the police used a Stingray to search for someone under investigation, it would also search hundreds if not thousands of other devices. It would be like a police officer getting a warrant to search one apartment and opening ever dwelling in the whole building.

Except, as far as we know, police in Chicago don’t get warrants to use cell site simulators or even wait until a law has been broken. In fact, the plaintiff specifically argues that the police department’s “decision to use a cell site simulator was motivated by the lawful assembly, association and participation in political protests.”

On the day the suit asserts Boyle’s phone was searched, he attended a Reclaim Martin Luther King Jr. Day rally. The Observer found this Facebook event for a rally by that name on Facebook, an action that included students who organized out of local middle schools. There’s a lot of material about the protest on social media:

Cell phones voluntarily submit information to mobile networks, so it might be natural to wonder how seizing an IMSI is any different than, for example, taking someone’s picture while they are in public. Topic explained that devices like Stingrays send a command to phones, requesting specific information that mobiles do not always broadcast publicly.

In particular, modern networks usually encrypt communications between devices and mobile towers, an action which specifically indicates an intent to keep the data private. Further, most phones transmit a temporary identification number, which changes regularly, rather than their permanent identification.

The surveillance has a material impact on users’ service, the petition argues, attesting that “when a cell site simulators is active in a particular geographic area, it drains cell phone batteries, disrupts legitimate cell phone service and often forcibly redirects cell phones to a lower quality network.”

Topic declined to disclose how his client knows his device had been searched. That will be released when the case reaches the appropriate point in the trial. “It is unlikely to be resolved very quickly,” he said, anticipating that city attorneys will use every possible appeal at their disposal.

The Department of Justice’s criticisms of the CPD today may raise themes similar to those in Boyle’s case, but it may also be no accident that Justice ignored the department’s surveillance of people engaged in protected speech. As it happens, in 2015 Justice asserted its own right to use cell site simulators without warrants when engaging in various forms of law enforcement activity.

A spokesperson for CPD told the Observer in a phone call that it does not comment on pending litigation. 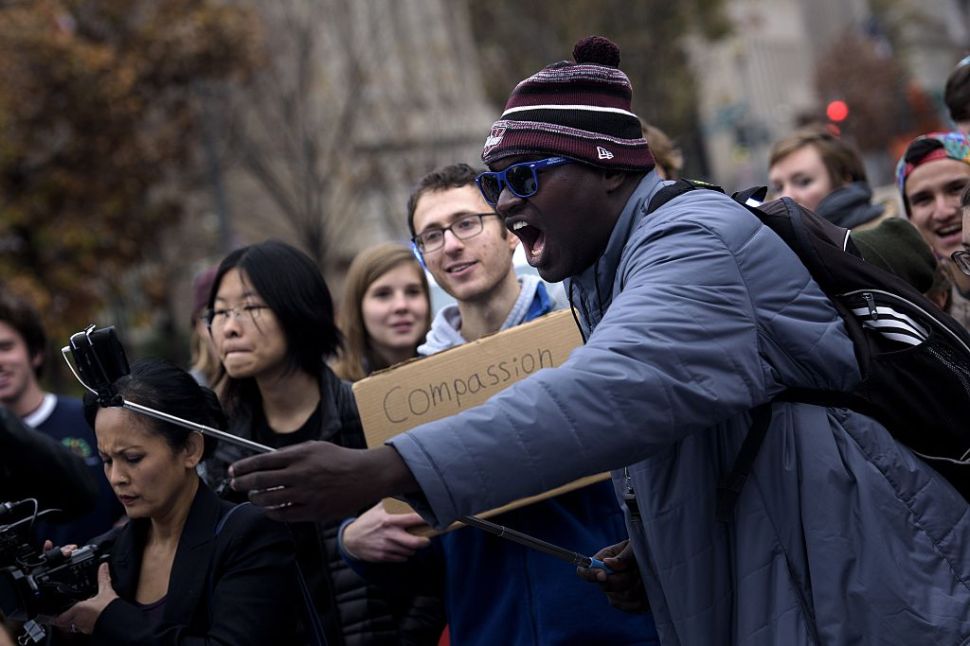