Summer House is Bravo’s latest entry in its Affluent White People series. While the show had been heavily advertised as premiering last night, the backdoor pilot technically aired last week, served up as a two-hour episode of “Vanderpump Rules.” And Vanderpump Rules it is not. The show centers on a group of rich, uniformly attractive professionals, all of whom share a home in the Hamptons on summer weekends. The housemates, who clearly chose their day jobs from a vague and glamorous roulette wheel, are between the ages of 26 and 34. Most are single. Some are dating. All are white. There’s a set of twins, but only one of them is married; we know this because 75% of the show’s dialogue hinges upon that fact. All of the men look like they’re named Kyle, and all the women are probably named Emily.

After its Vanderpump-centric lead-in, Summer House kicks off with an actual dose of reality. For anyone that’s ever rented a house with friends – for kicks, for Spring break, or otherwise – it’s an uncomfortably familiar dose. In between the gang’s introductory talking heads, we’re showed the mundanities of beach house life: Feeling cramped during weekend traffic, arguing about groceries, awkward driving arrangements, security deposits, blocked toilets, social anxieties, cooking and cleaning. And that’s the last time viewers will find any tenuous connection to this group. Bravo is famous for broadcasting a unique mix of relatable and unattainable, but while the majority of viewers could relate to, say, shoving four drunken roommates into a motel bed in Panama City Beach, it’s unlikely they’d be able to “get” having clothes hangers shipped in advance to a Hamptons party mansion. (After all, they drove there. In a car that presumably one of them owns. Why not bring hangers with you? There’s so obviously room!)

If you can stomach sound bytes like “Dating in New York sucks…for girls!” and “What’s more American than Mexico?” the housemates drop ‘em in spades.

If you’re looking for fresh-pressed escapism, Summer House is your show. Tune in for tan dudes crowing over “beach brunches, pool parties, boozy brunches, and then going out.” If you can stomach sound bytes like “Dating in New York sucks…for girls!” and “What’s more American than Mexico?” the housemates drop ‘em in spades. And since a broken clock is still right twice a day, there are discernible nuggets of honesty here; Cast member Carl discusses how blue collar roots and far and few between childhood vacations encourage him to spring for the Summer House lifestyle now. Kyle, a financial advisor and the oldest of the group at 34, is beginning to feel adrift as his friends move forward with their lives. (Or so he says.) Toward the end of the pilot, housemate Everett reveals a bomb hit his convoy in Iraq in 2008. Just recalling the memory brings him to tears, and the friends standing with him on the beach don’t know how to react. But then the show makes a hard cut to the mansion’s pristine white kitchen, and Everett’s service isn’t mentioned again.

We’re led to believe that the group is financially responsible for this expansive home, though that’s tough to believe. That it came together organically over some years at least makes sense – the crew’s chemistry feels real, their arguments credible — but when was the last time your inner circle was recruited for a Bravo show? At any rate, strap in, because it’s July 4th – “the official start of the summer – and we’re in for next episode, the so-called premiere.

If the July 4th episode proved one thing, it was that this group of people should probably not be on television. We see some more of the gang’s true colors, and they’re not so great. Audiences tuning in for what they thought was the premiere would have little reason to find themselves emotionally invested in any goings-on at the Summer House. Apart from sharper one-liners — Carl describes his physique as “shredded like a Julienne salad” – there isn’t enough to hold viewers’ interest here. For instance, the July 4th house party was a cacophony of straight, white dude privilege. Kyle, sporting a blonde mullet and insisting guests call him “Cletus McGee,” decides to interrogate younger housemate Stephen about his early life in the south. When that proves too difficult or boring to keep up with, he turns the conversation to Stephen’s sexuality. What’s more fun than a young gay man being grilled on his history of internalized homophobia by a drunk moron at his own house party? Everything, probably. Everything.

Depending on how you interpret Kyle, he’s either set up as our hero or our villain. A rational person might hear him and think “Yikes,” but that’s not the case here. Kyle is an integral part of the gang. An anchor, even. The show relies on him for additional exposition! And even when he describes his ex-girlfriend as “the ideal” for him – “nine years younger, sexy, smart, not expecting a ring” – we don’t know whether to laud him for his self-awareness or punch him in the face. The only thing his housemates call him out on is being a messy drunk eater. Really? Not the fact that he’s comfortable stereotyping the American south as uneducated and poor? That he thinks, “When did you come out?” is a good way to start a conversation with a newer friend? Then again, his blanket rules about “No dating!” are clearly ignored, and he’s so desperate for attention that he summons an ex to the house almost immediately…Nope. Never mind. Shed no tears for Kyle, folks.

In the end, Summer House is bland. And that’s so disappointing. What would be a better escapist fantasy than watching rich, attractive young people stumble around Montauk parties? This week is miserable. The winter is long and full of terrors. We needed billowy white linens and professional lifestyle bloggers to play us out. Instead, it’s just a bunch of people without personalities who make margaritas at a shared home and eventually yell at each other. Not a single one of them would be dynamic enough to build a series around – let alone, all of them together. Shows like The Real World work because they’re diverse, and a breeding ground for drama. Summer House is like what would happen if a Vampire Weekend song became sentient and tried to Godzilla the Hamptons.

Summer House airs on Bravo every Monday night at 10 p.m. Thus far, the show has provided zero conflict – and I am going to watch it every week. 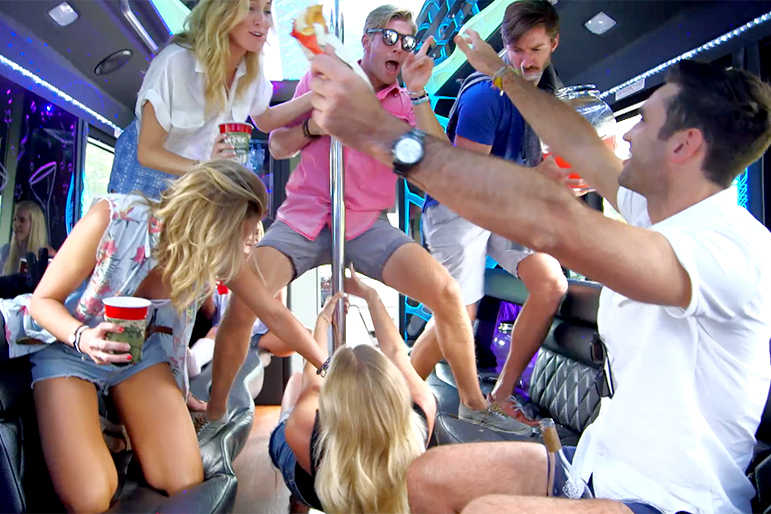