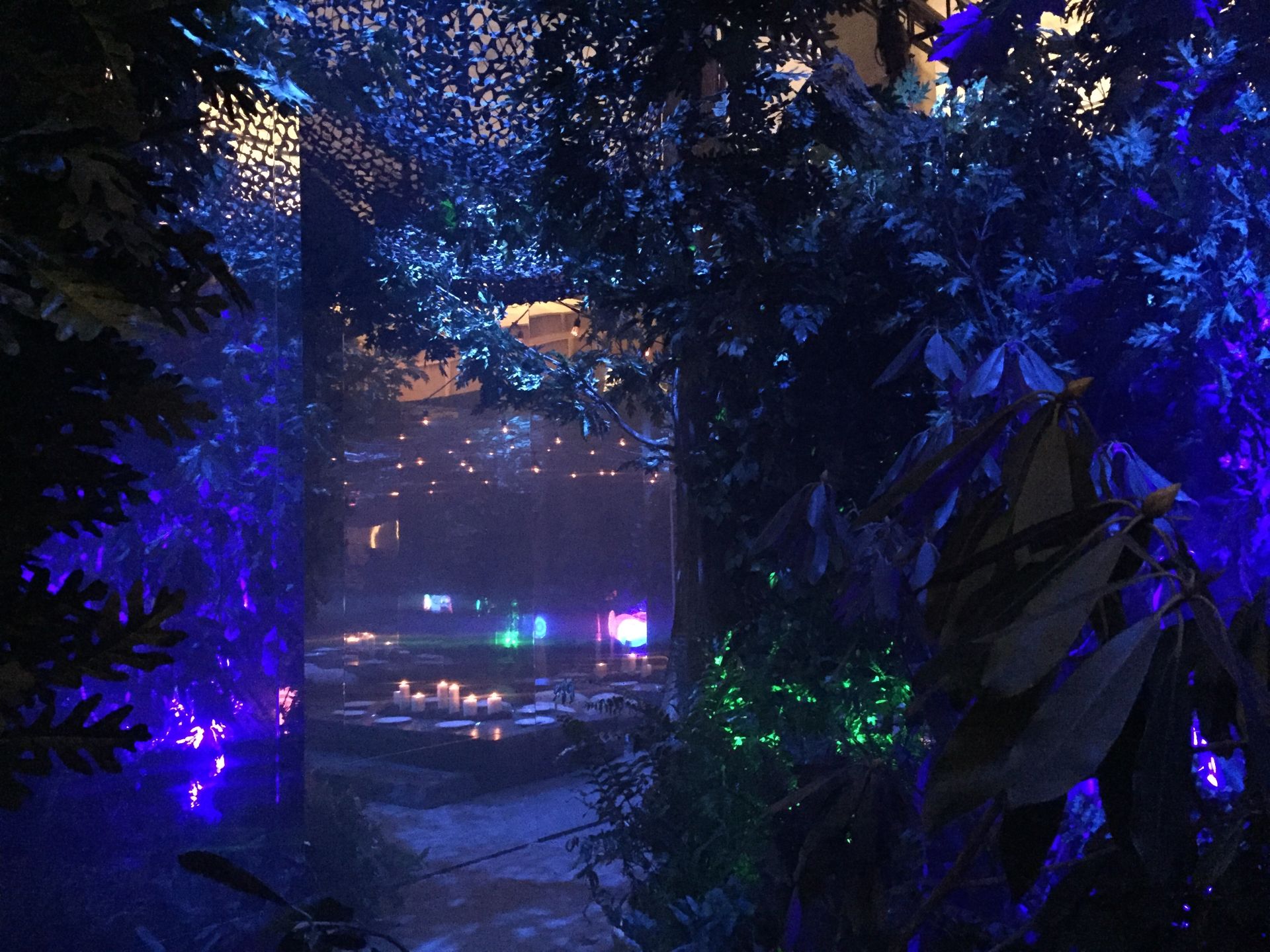 A magical dinner party, complete with enchanted silverware, inside a smoke-filled forest at Syfy's Hall of Magic.
Alanna Martinez 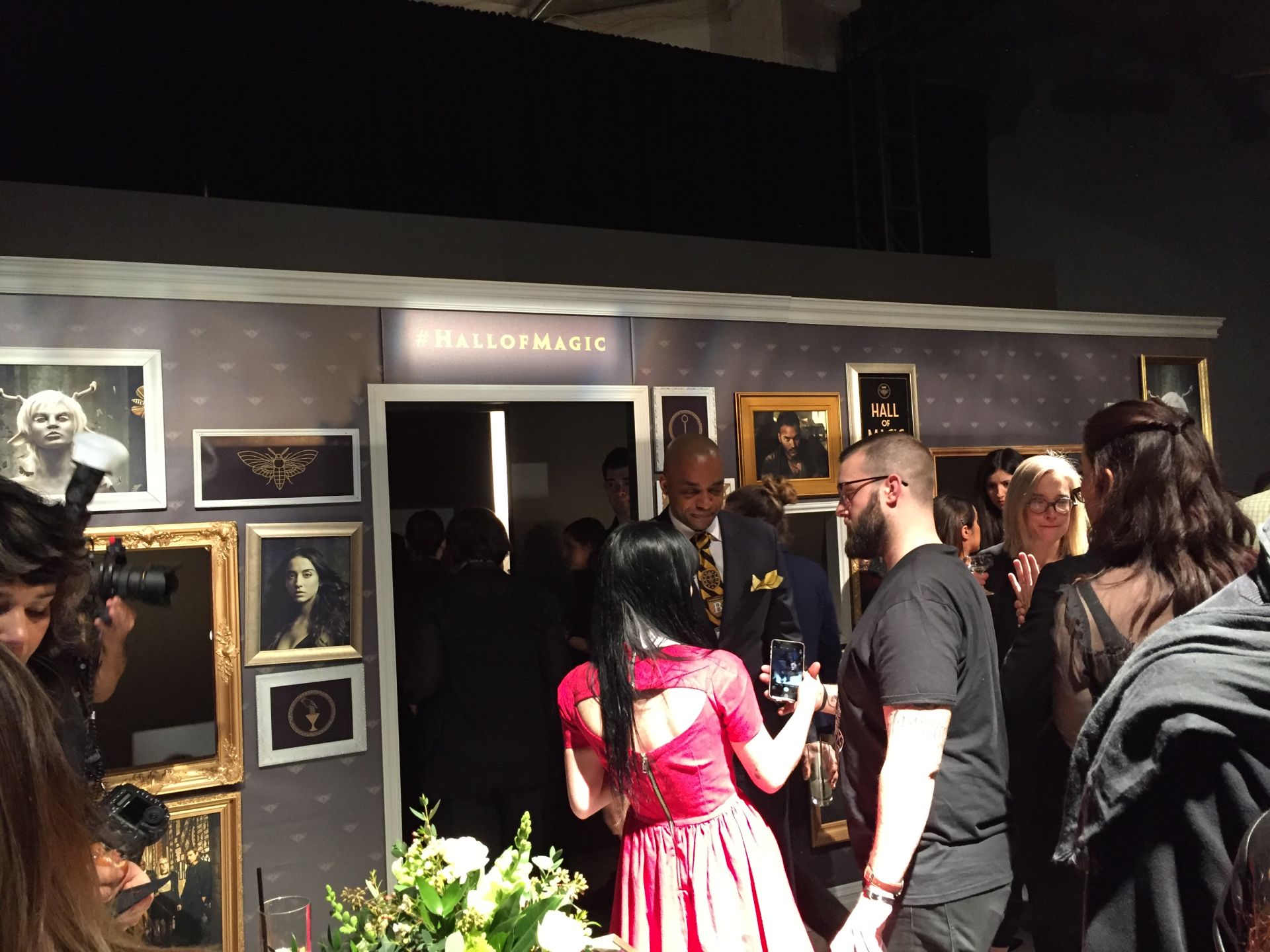 Guests at the entrance of the Syfy's Hall of Magic.
Courtesy of Syfy 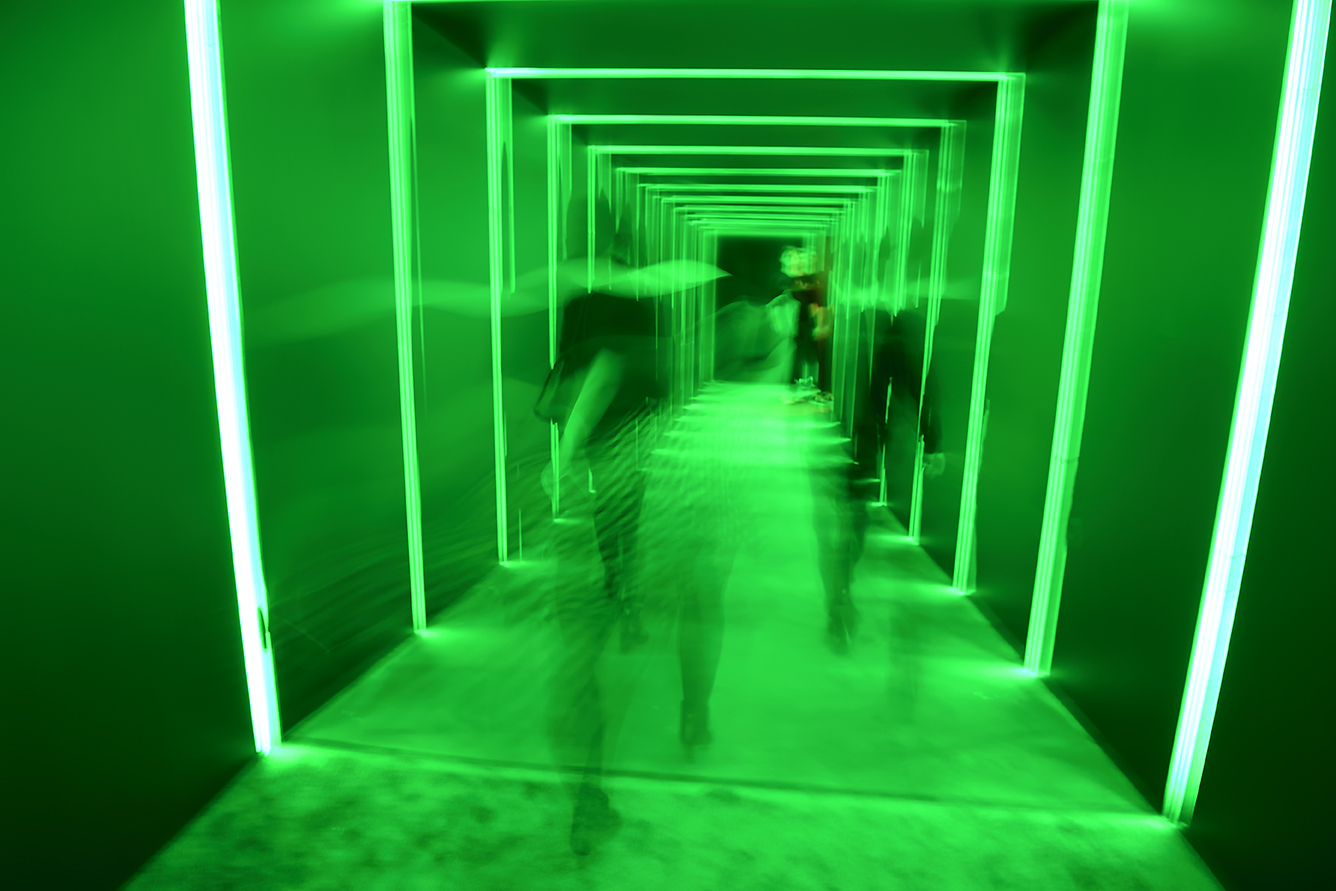 The entrance to the Hall of Magic.
Courtesy of Syfy 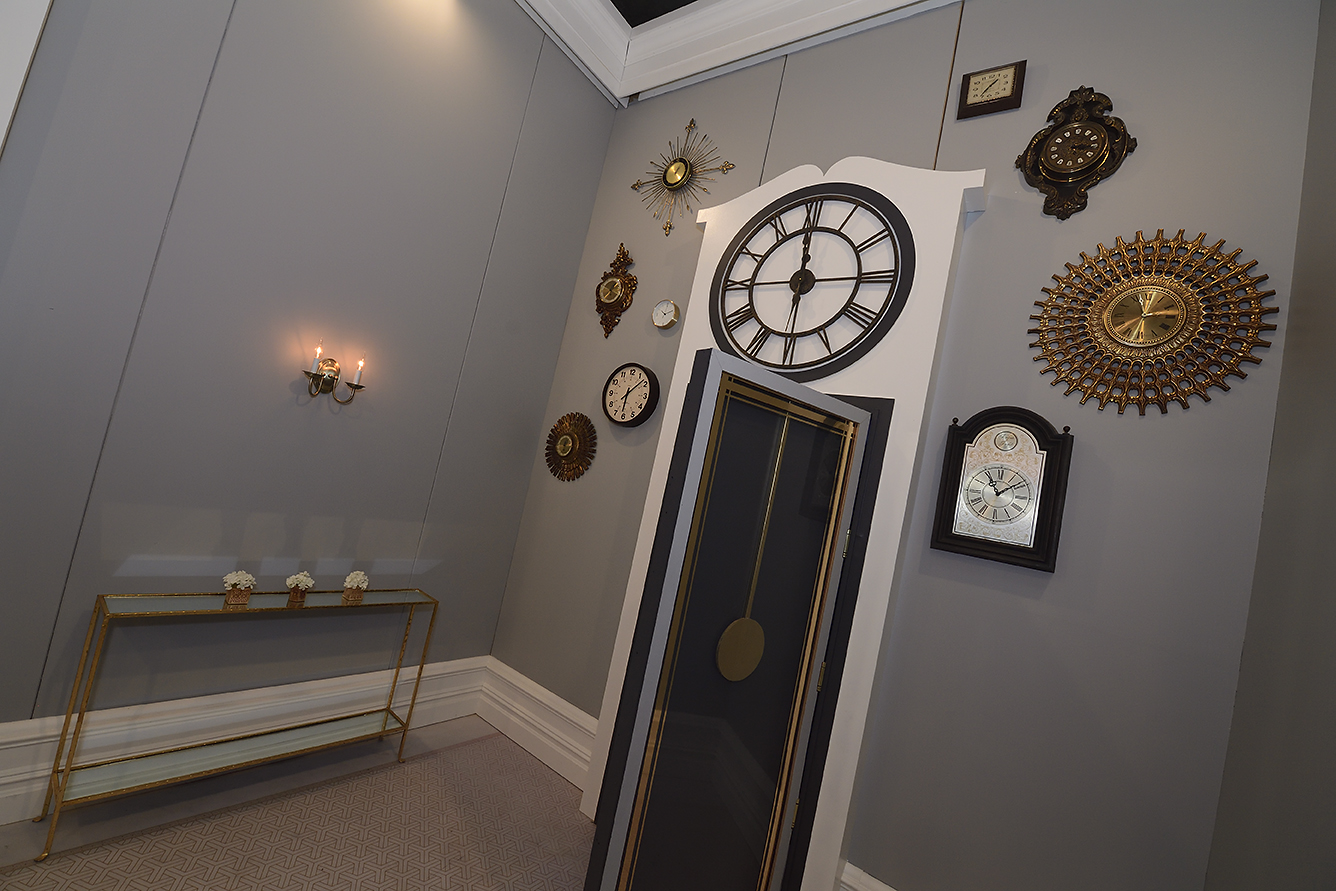 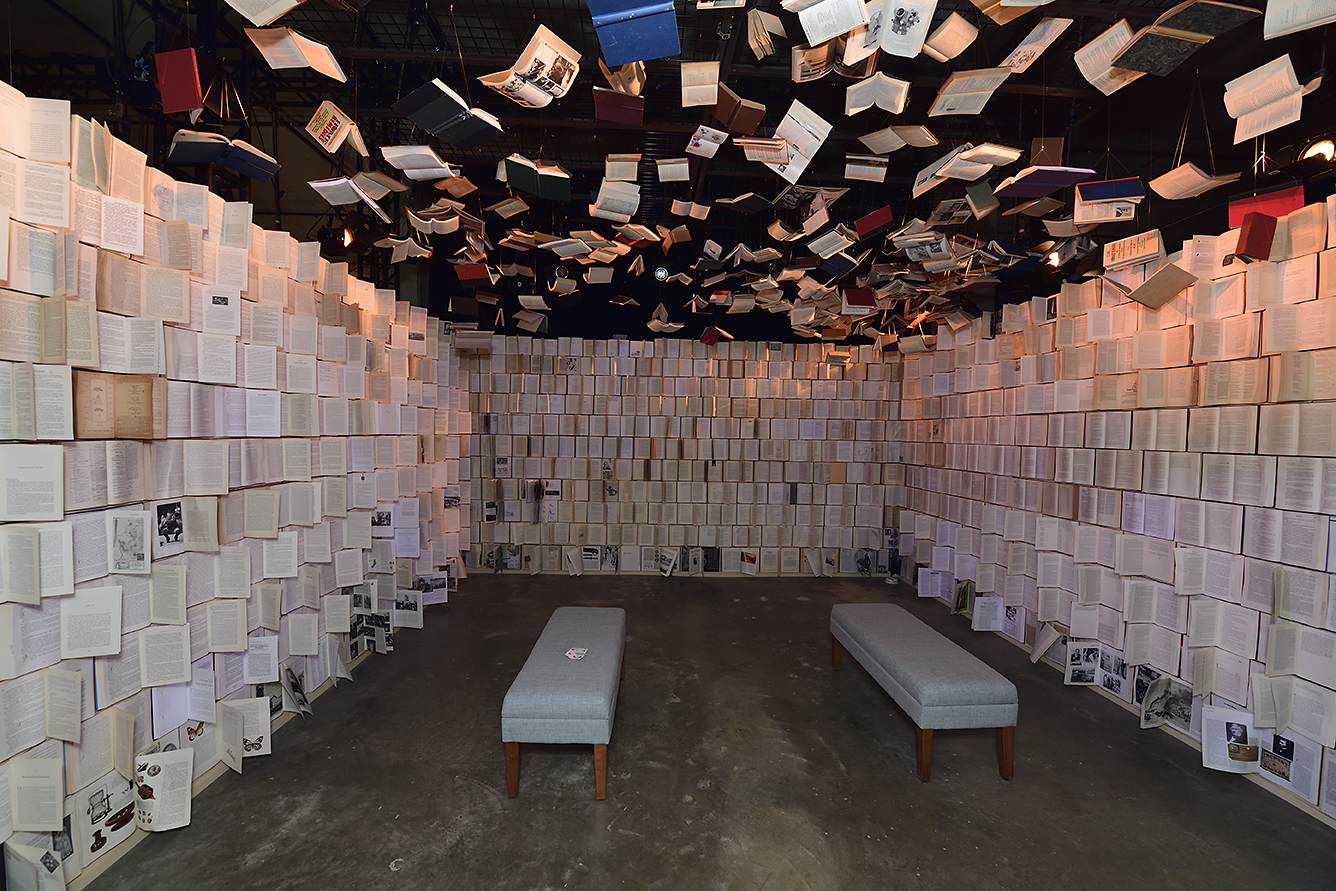 Flying books in the Library.
Courtesy of Syfy 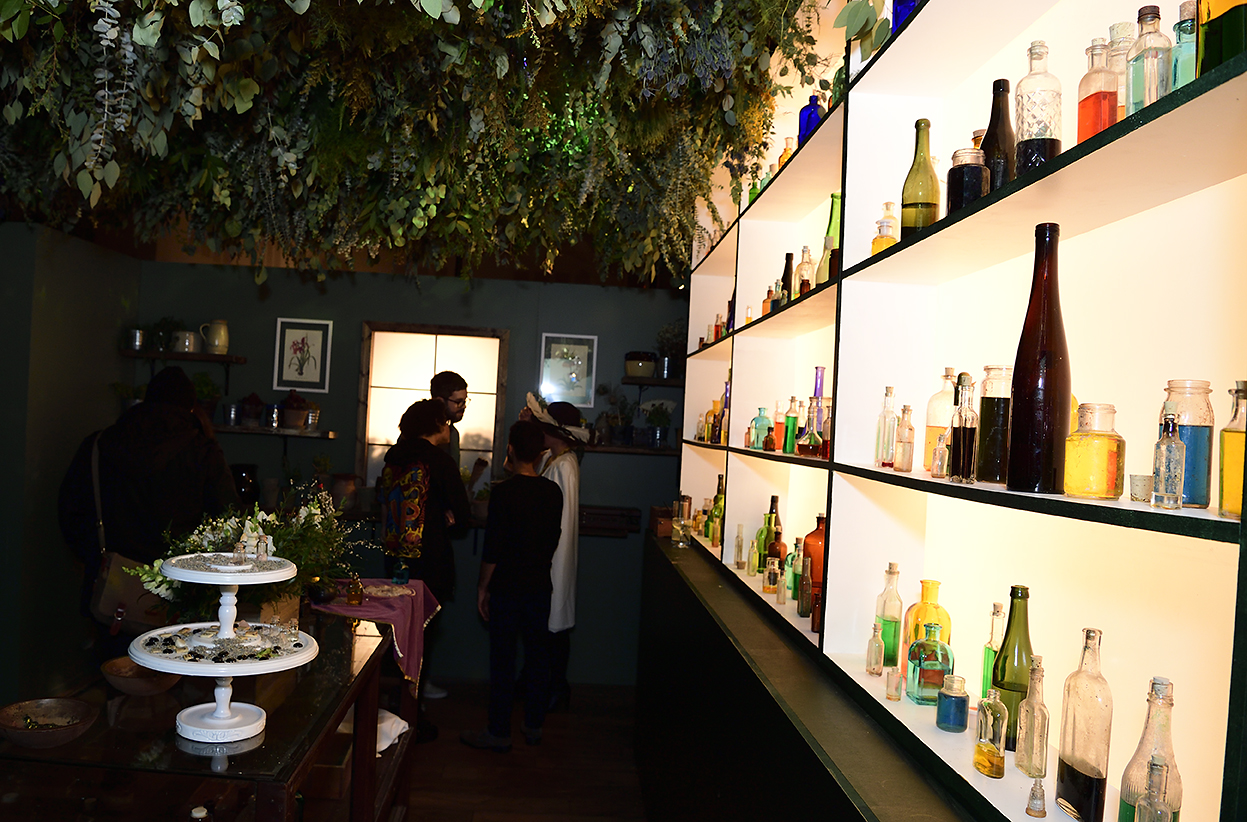 Guests use potions to cast their own spell.
Courtesy of Syfy 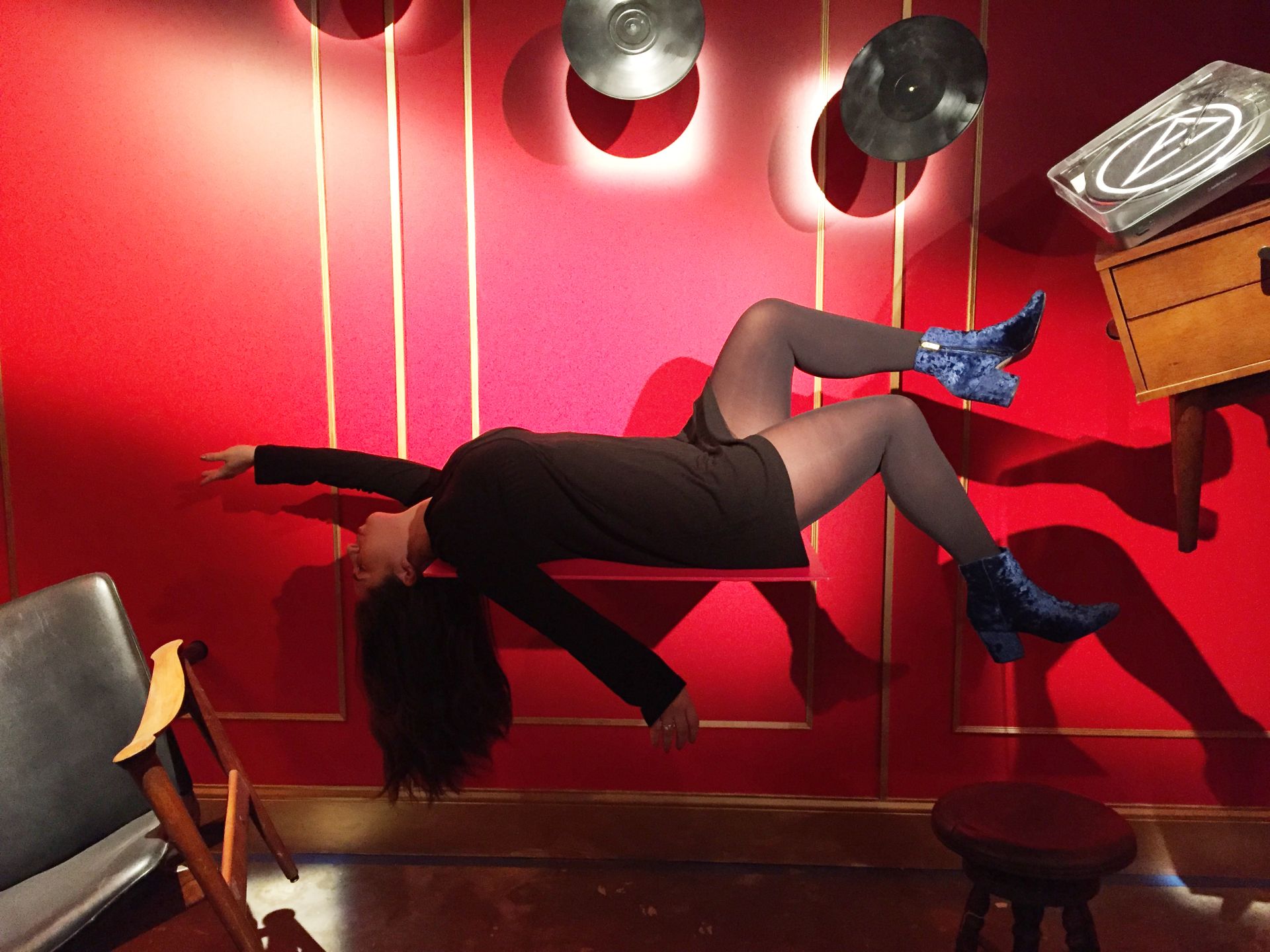 Levitation can be a little uncomfortable, but it makes for a great selfie.
Alanna Martinez
Advertisement 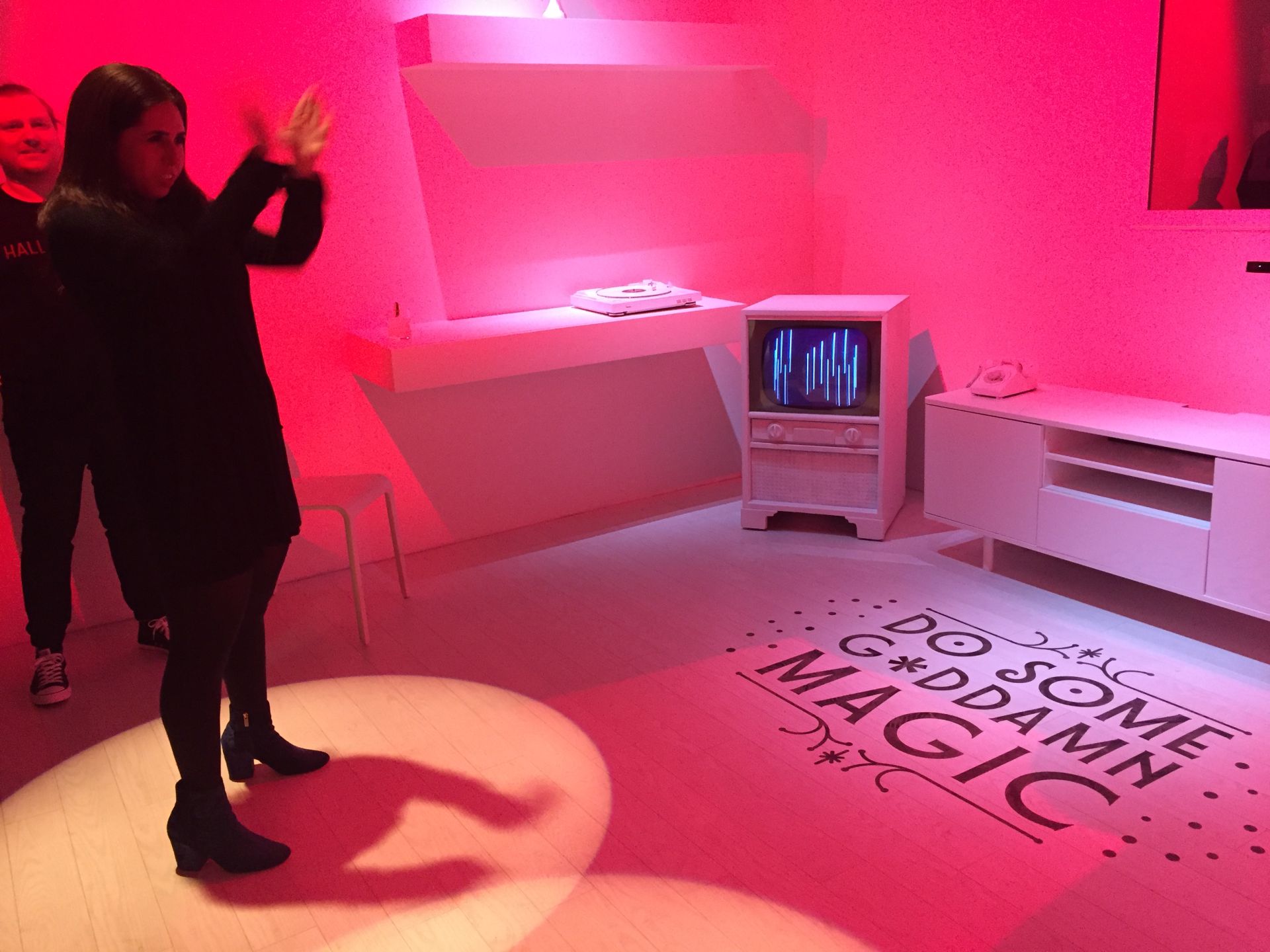 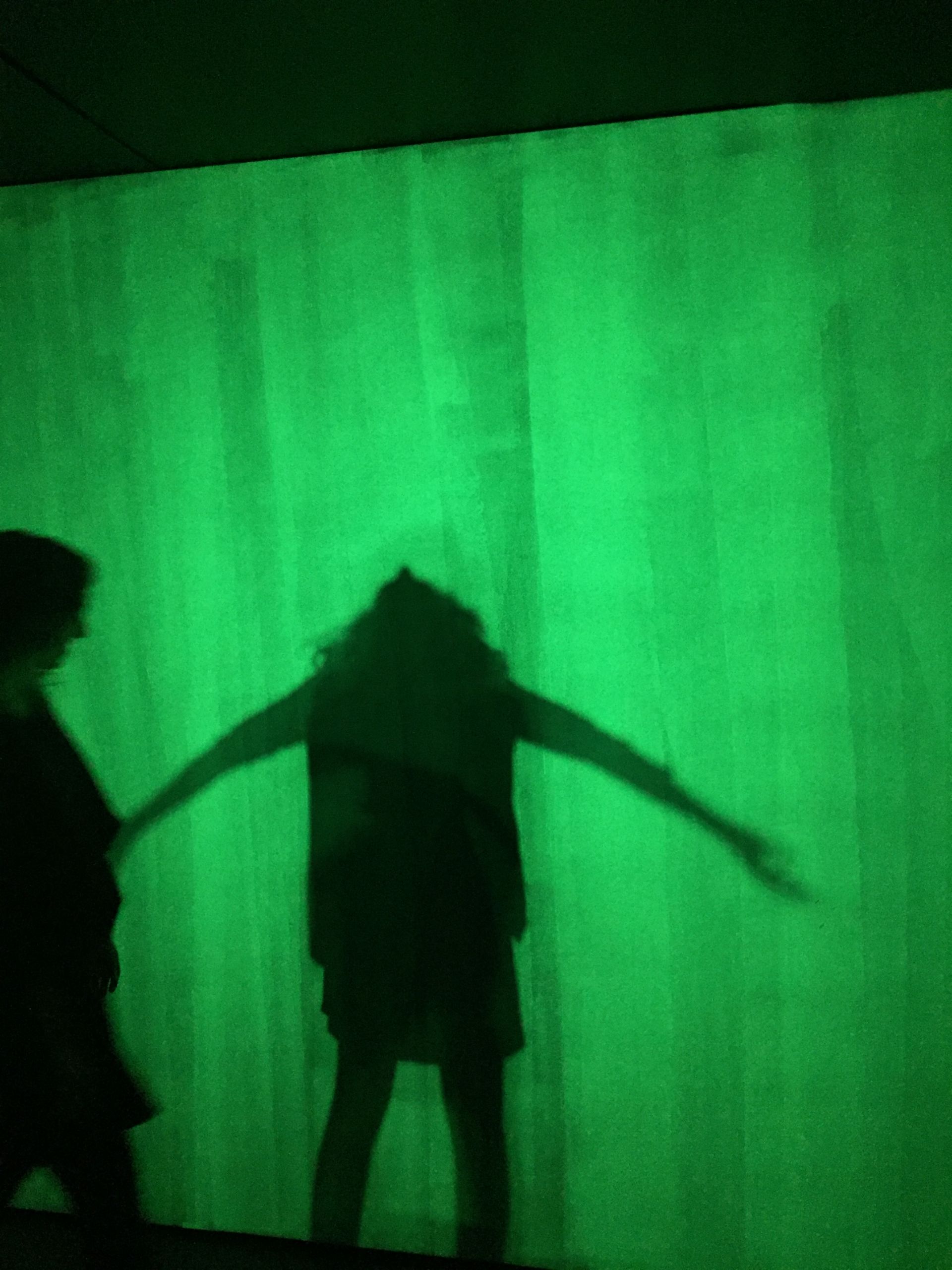 Look, it's me and my shadow!
Alanna Martinez 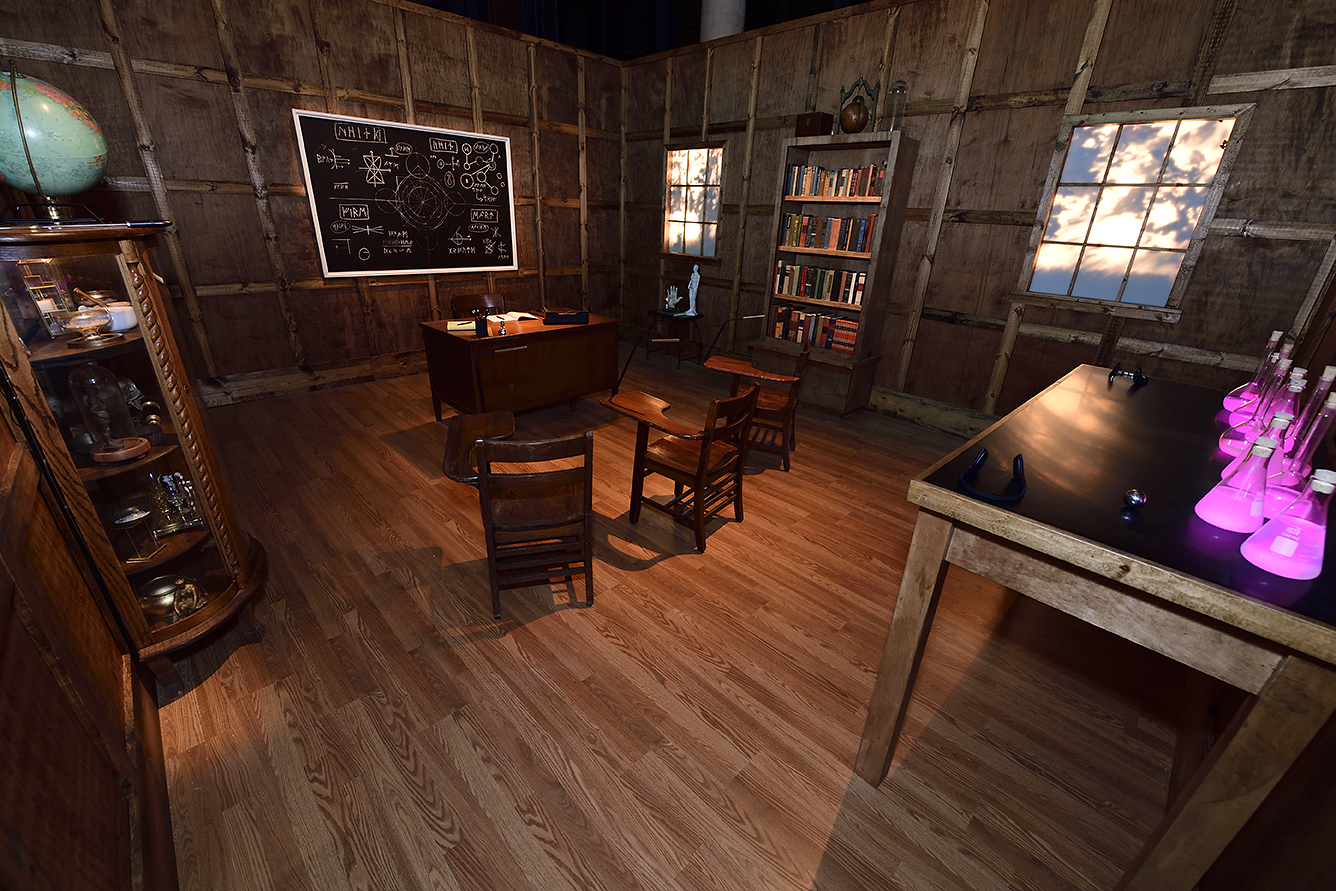 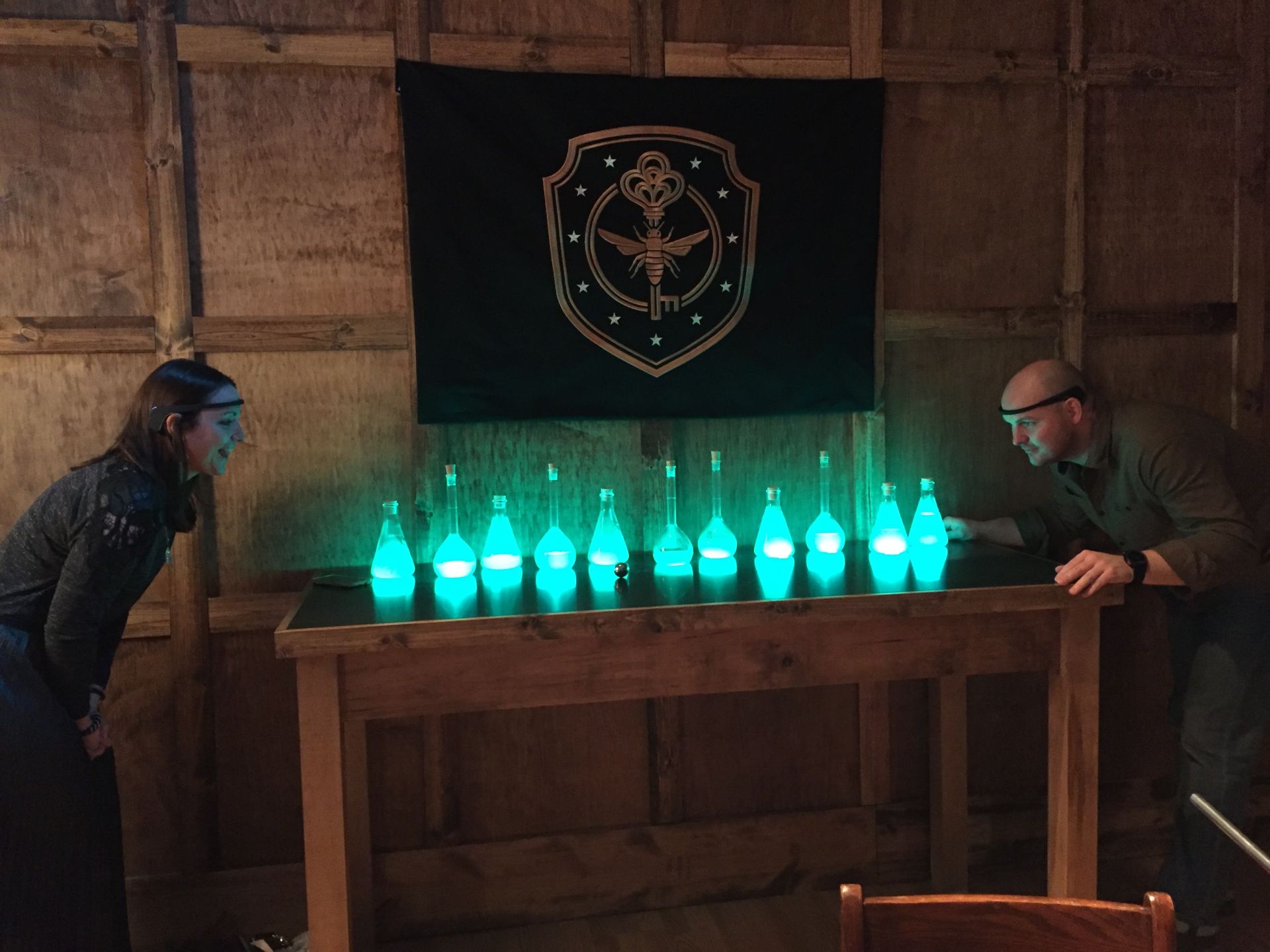 Guests attempt to move a metal ball using nothing but their minds—and some fancy tech.
Courtesy of Syfy 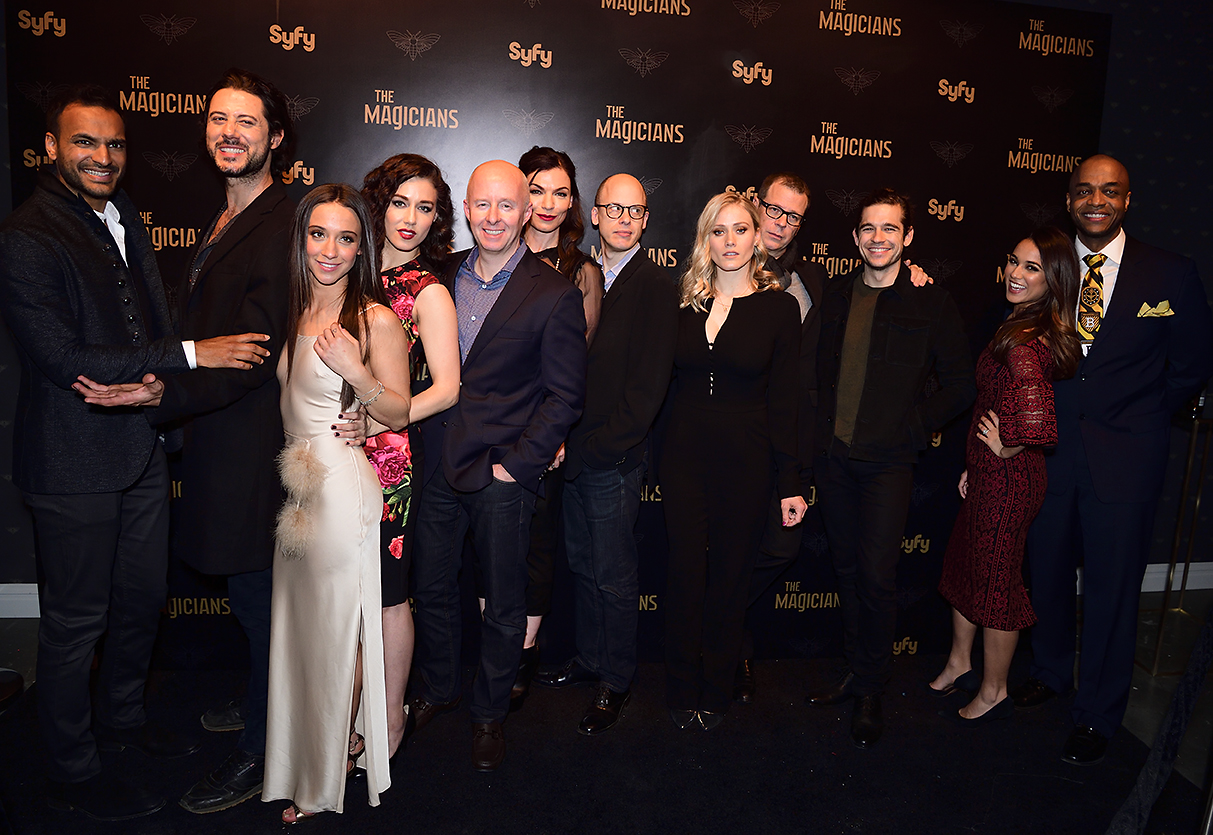 The cast of 'The Magicians' with author Lev Grossman.
Courtesy of Syfy 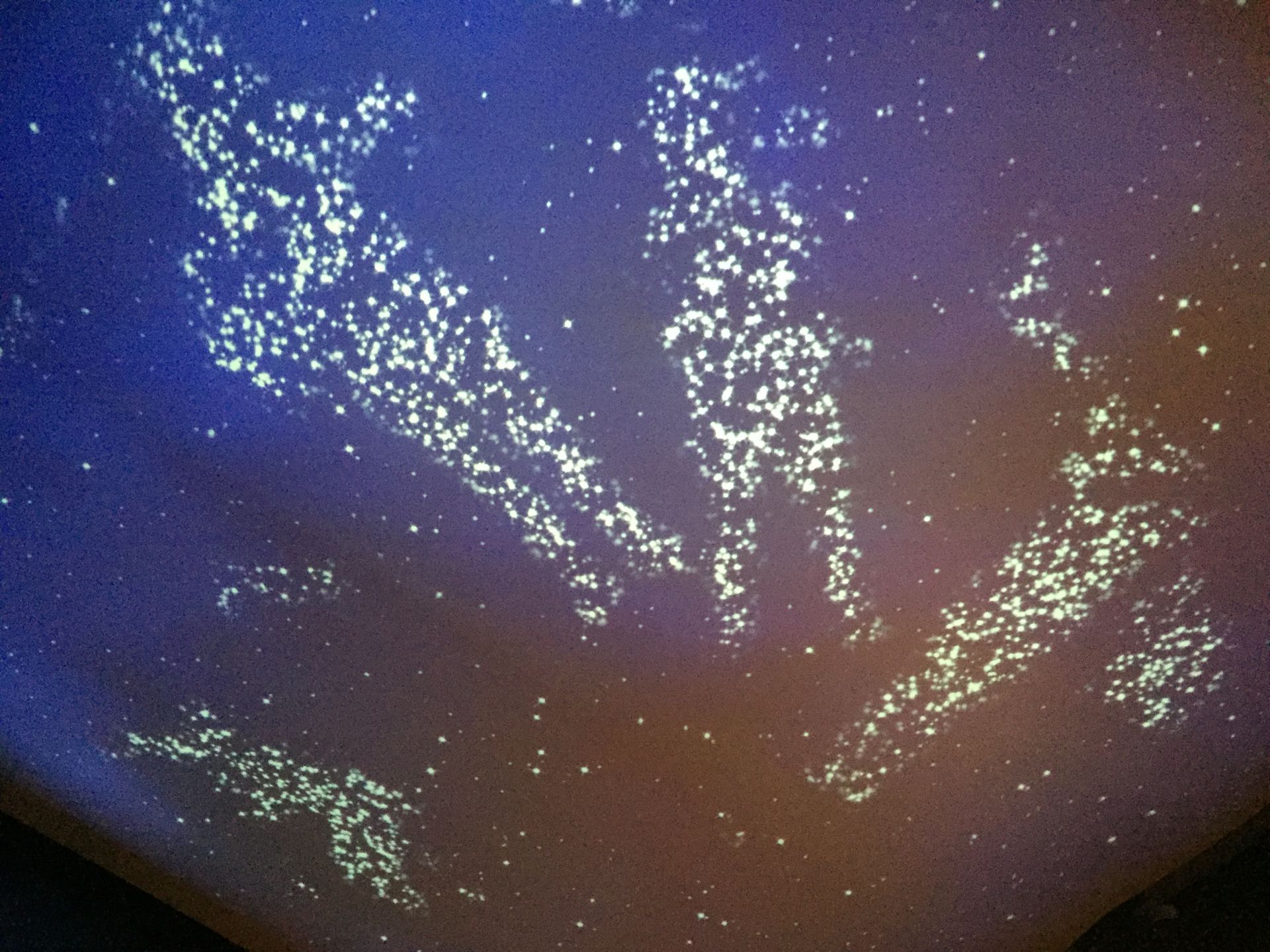 Digital stars take the shape of human bodies, projected onto the ceiling above a grassy field.
Courtesy of Syfy
Advertisement 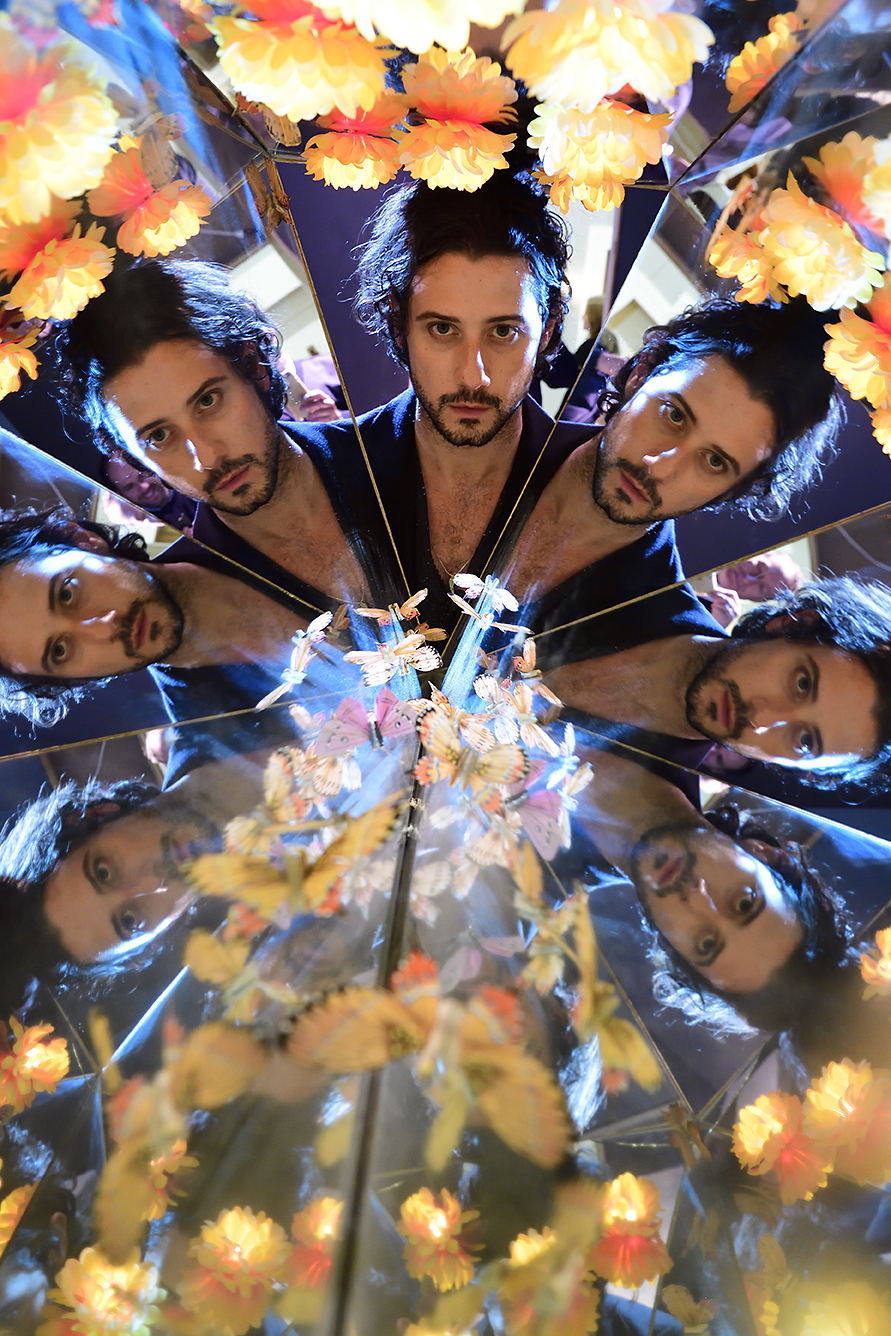 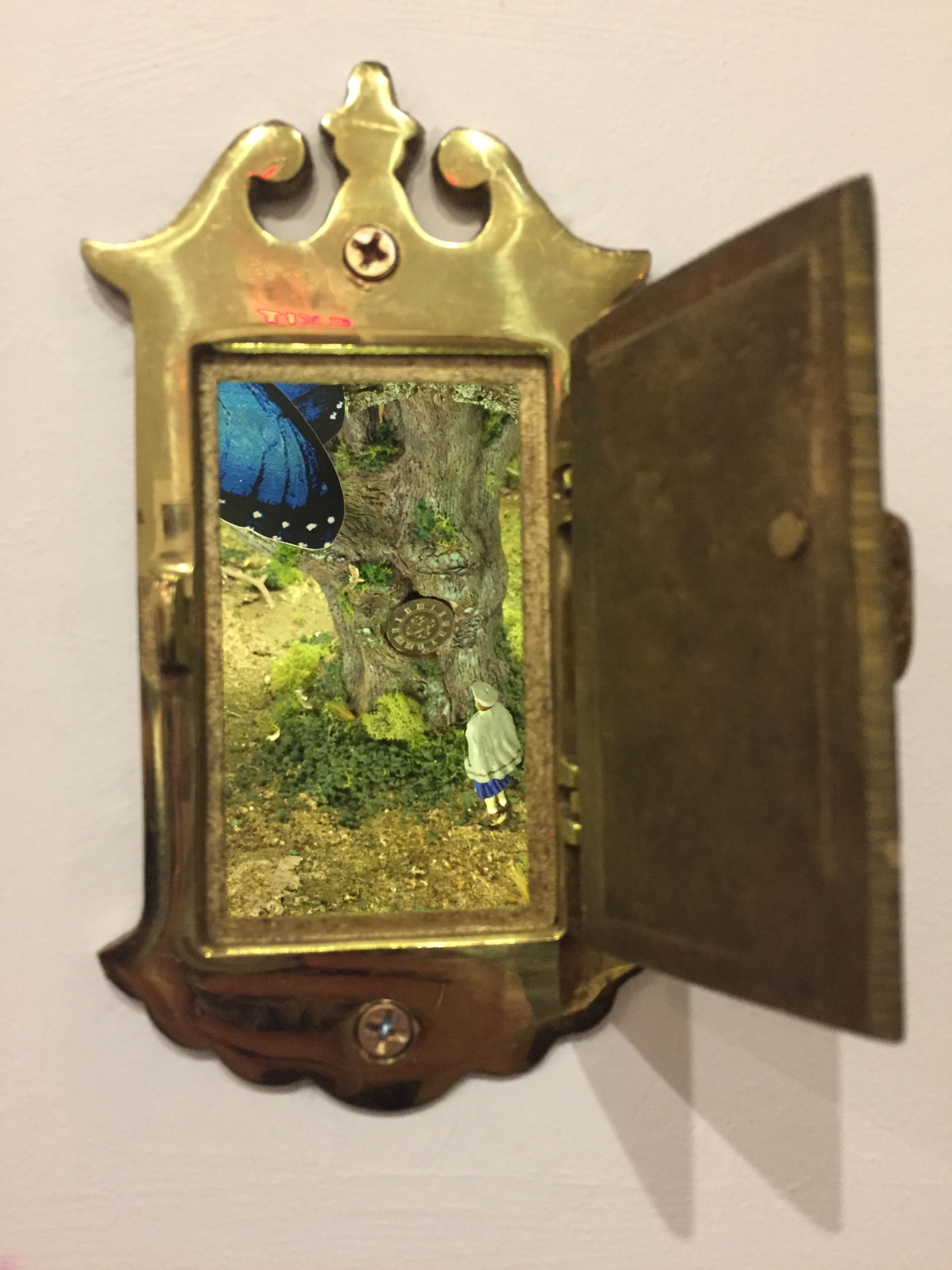 Behind a tiny keyhole, a glimpse of Fillory.
Courtesy of Syfy 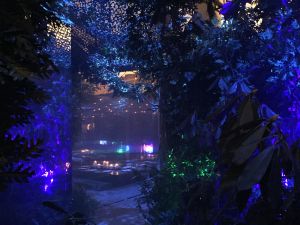 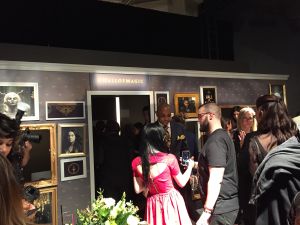 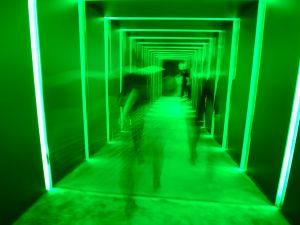 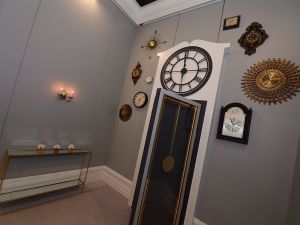 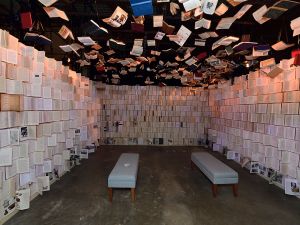 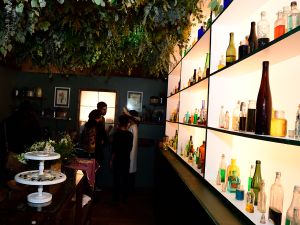 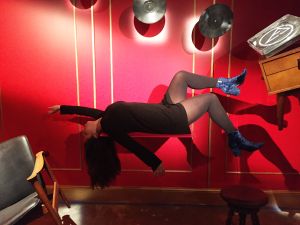 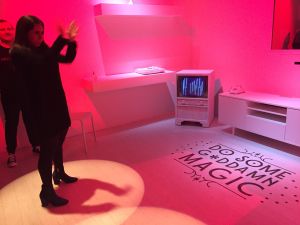 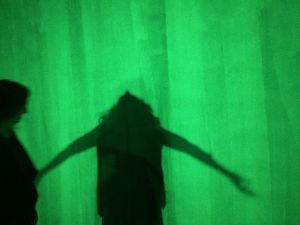 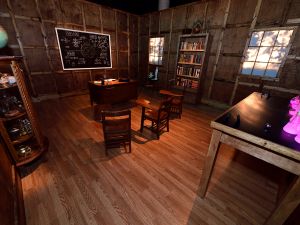 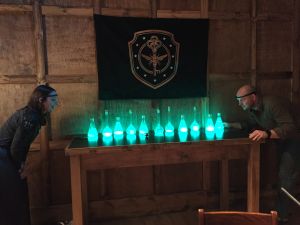 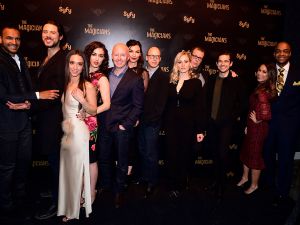 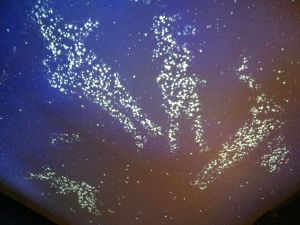 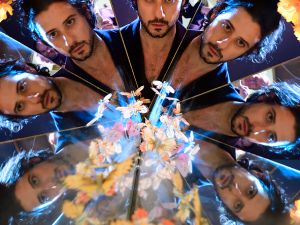 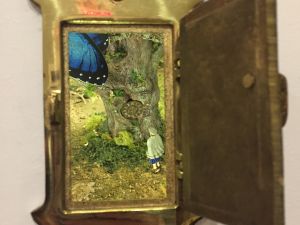 It turns out, magic is real. Or at least the illusion of sorcery can be pretty convincing. That’s the idea behind Syfy’s immersive Hall of Magic at Brooklyn’s William Vale hotel, a pop-up magic school open to the public through January 29 that invites fans of the network’s hit show The Magicians to try their hand at casting spells, concocting potions and mastering levitation, much like the show’s characters will when the series returns for its sophomore season on January 25. And after spending a night at Brakebills, I admit: magic isn’t as hard as it looks on TV—or maybe I’m just a natural.

I’m not one to be easily swayed tricks and illusions, even if it comes in the form of an “interactive” funhouse for magic enthusiasts. But, as a devoted fan of Lev Grossman’s fantasy trilogy of the same name, and a dedicated viewer of the television adaptation (next Wednesday couldn’t come soon enough), my cold heart warmed a few degrees as I lay on a grassy floor, drink in hand, and gazed at glittering digital stars on the ceiling form the outline of my body at last night’s opening party. When combined in the right quantities, innovative technology such as heat mapping and old school analog tricks like strobe lights and hidden magnets can still be enchanting enough to charm even the most cynical of us.

The Hall is inspired by Brakebills University, the magical graduate school where The Magicians‘ stars Quentin, Eliot, Janet, Alice and Penny learn to twist and flick their fingers and do battle magic, come face-to-face with dark forces and do all the things grad students do best, not excluding drinking, drugs and the occasional unsanctioned sex ritual. Guests kicked-off the night sipping themed cocktails at the bar, and mingling with the show’s cast. Rick Worthy (Dean Henry Fogg) showed off his Brakebills spirit by wearing a tie adorned with three school crests, and author Lev Grossman, Jason Ralph (Quentin), Olivia Taylor Dudley (Alice) and Arjun Gupta (Penny) weaved between groups of chattering fans who were eager to get their magic on.

Visitors enter the Hall through an illuminated tunnel and a clock embedded in the wall, just the way Grossman’s Chatwin children first stumble their way into the magical land of Fillory. Once inside, prepare to be amazed—or at least impressed—because the illusions are plenty, the aromatics of each environment is overwhelming and there’s a second bar in the potions room.

In the Library, books fly on the ceiling, and in the potions lab an instructor is on hand to guide participants through an invocation that involves oils and prayer. Down the hall, old school props let guests snap selfies while levitating. (Well, you won’t actually levitate, but if you position yourself well enough on a cleverly camouflaged plank of wood your Instagram followers will never know the difference.)

In a classroom peppered with Brakebills flags, anthologies of magic and a blackboard covered in runes and equations, you can try your best to move a metal ball across a table using your mind (and with the help of some fancy headbands that do most of the work for you). Next door, a blinding strobe creates optical trickery to capture your silhouette against the wall. And if you happen to tire of doing spells, because all that finger work can be exhausting, there’s a dinner party with enchanted silverware waiting somewhere nearby in a smoke-filled forest.

So, can just any one master the art (and science) of magic? Advanced spell work should probably be left to professionals. And since the Hall of Magic helped boost my confidence in the areas of telepathy and astral projection, if there’s an opening at Brakebills in the spring I’m giving it a shot.