After nearly six years of uprising, conflict and chaos, the partition of Syria is imminent. President Bashar al-Assad will of course rail against it; his crucial ally Iran will probably resist too, and the marginalized US won’t even acknowledge the prospect. But the lines are nonetheless being drawn.

With pro-Assad forces back in control of Aleppo city, a newly co-operative Turkey and Russia are ready to pursue partition as a short-term resolution. The Syrian opposition and many rebels will embrace it as their best immediate option, and the leading Kurdish political and military groups will settle for whatever autonomy they can get. If things continue shaping up this way, by the end of 2017, Syria will quite probably become a country of four parts.

The Russia- and Iran-backed Assad regime is set to hold much of the south and west, and most of Syria’s cities. There will most likely be a Turkish/rebel area, effectively a “safe zone”, in parts of northern Syria; the Syrian opposition will probably control Idlib province and possibly other pockets of territory in the northwest; while the Kurds will have some form of autonomy in the northeast.

A settlement like this has been a long time coming. Neither the Assad regime nor its enemies will settle for just a part of Syria, and both have survived years of intense conflict. The opposition and rebels still control territory from the north to the south; Assad clings on with the help of Russian aerial bombardments and Iranian-led ground forces. All the while, the Kurdish Democratic Party (PYD) and its YPG militia are still defending territory against both IS and the Assad regime.

If the lines of a potential partition were clear some time ago, what stood in the way of recognizing them was the challenge of Aleppo city. Without recapturing it, the Assad regime had no hope of claiming an economic recovery (however disingenousouly) in the areas it controlled, let alone in the entire country. But the city was surrounded by opposition-controlled territory; Assad’s military was far too depleted to change the game, and even with outside support, its campaign would be protracted.

The turning point came in August 2016 when Turkey and Russia began to reconcile. The two countries had always been on opposite sides of the conflict, Turkey supporting the opposition and rebels and Russia Assad. Their relations had been tense since November 2015, when Ankara’s jets shot down a Russian warplane near the Syrian-Turkish border. But within a year, both saw the advantages not only of reconciliation, but of agreeing on what their respective spheres of influence in Syria should be.

A deal was quickly established: Turkey would accept the reoccupation of all of Aleppo city by pro-Assad forces, supported by Russian-Syrian siege and bombing tactics, while Moscow would accept a Turkish military intervention alongside rebels in northern Syria, including much of Aleppo province.

Which is where we are now. Civilians and rebels have been evacuated from or allowed to leave the last opposition holdouts in eastern Aleppo city. The Turkish-rebel offensive continues to push back IS, although it is facing difficulties in its assault on al-Bab, the group’s last major position in Aleppo province.

A national ceasefire, brokered by Turkey and Russia in the last days of 2016, but pro-Assad forces are breaking it in offensives near Damascus. The two countries are trying to arrange political talks between the regime and the Syrian opposition later this month in Kazakhstan.

As Andrey Kortunov, director of a think tank close to the Russian Foreign Ministry, summarized it to Reuters: “There has been a move toward a compromise … a final deal will be hard, but stances have shifted.” The same story quotes a “senior Turkish government official” explaining that the convergence “doesn’t mean we approve of Assad. But we have come to an understanding. When Islamic State is wiped out, Russia may support Turkey in Syria finishing off the PKK.”

So can the Turkish-Russian initiative win over (or put down) everyone else who has a stake in the outcome?

The biggest immediate challenge is in the opposition-controlled areas near Damascus. The Assad regime has already taken back many of the suburbs, but two key areas are still beyond its control: Wadi Barada to the northwest, and East Ghouta and Douma to the northeast.

Wadi Barada is home to the al-Fijah springs, which provide more than 60% of Damascus’s . Since mid-December 2016, the Assad regime’s forces and Hezbollah have been trying to overwhelm it with bombing, shelling, and ground assaults. In the process, the pumping station for the springs has been damaged, cutting off or limiting to about 5.5m people.

At the same time, the Syrian Army and its allied militias are trying to take more territory near Douma, which is the centre for the leading rebel faction Jaish al-Islam. Turkey is critical of the offensive, Russia is staying silent, and the Iranian government and possibly its military are backing it.

Then there’s the Syrian Kurdish movement. The PYD would like to unite its area in the northeast with a Kurdish canton in the northwest, while Turkey would like to push back any Kurdish zone of influence and elevate other Kurdish groups over the PYD. With the Assad regime opposed to Kurdish autonomy of any sort, the only agreeable option may be containment: Turkey will probably accept a Kurdish area east of the Euphrates River, limiting any zone of control or potential military advance. The PYD, knowing it has no powerful backing, will accept the offer, even if it isolates the Kurdish area in and near Aleppo city.

As for Assad himself, the Syrian opposition continues to demand that he step down – but few others are bothering any more. The US effectively gave up the cause in 2012, Saudi Arabia and the Gulf states have gone quiet, and Turkey seems not to care much. He may one day be offered the chance to step down peacefully when elections are arranged, but in the meantime he will stay where he is.

Confronted with the increasingly effective Turkish-Russian axis, a US official opted for condescension: “So this country that essentially has an economy the size of Spain, that’s Russia, is strutting around and acting like they know what they are doing. I don’t think the Turks and the Russians can [negotiate] without us.”

This is pure bluster. For three years now, Russia has been feigning co-operation with the US, and in the process has deftly maneuvered its Western rival onto the sidelines. If Washington pushes back too hard, it could wreck its relationship with Turkey – which grants it access to key airbases – and end up framed as the main obstacle to a major breakthrough.

The events of the last seven months have only reconfirmed what’s been clear for some time: there is no optimal solution to the Syrian crisis. Partition is far from ideal, and it may only be short-term — but at this point, it’s the only viable alternative to endless slaughter, displacement, and destruction.

Scott Lucas is a Professor of International Politics at the University of Birmingham. This article was originally published on The Conversation. Read the original article. 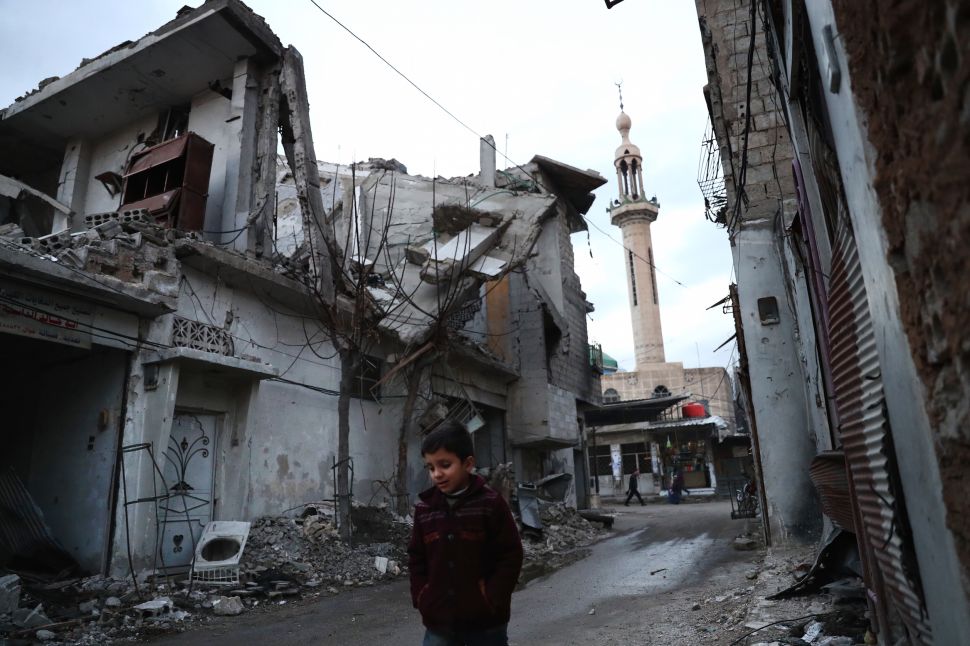