Listen, I want to talk about The Crown, but first, a few words about the 20th century.

The 20th century was a monster, yes it was, what with the O.J. trial, and Star Trek and John Lennon getting shot, and of course the Beatles, and Bret Easton Ellis, and Sex in the City—and that band Chicago happened in the 20th century, too! Oh, and Jim Carrey and that whole “Alrighty then!” thing! What a century! Did I mention OK Computer? Yeah, 20th century!

And there was the Second World War, which was even bigger than the O.J. trial.

In the middle of 1940 (that’s only, like, 77 years ago, when your grandparents were probably alive and maybe even your parents), the armies of the Third Reich stretched from the unimaginably vast desert panorama of North Africa to the ice-blinding wastes of the arctic circle, from the palm frond–shadowed beaches of Andorra to the muddy potato fields of the Ukraine, from the ancient, stony hills of Greece to the saloons of the Champs Elysees. The entire continent of Europe was infected with a barbarity and cruelty that no one had thought was possible in the modern era.

It also seemed inevitable that Great Britain, just 26 miles across a narrow channel from Fortress Europe and in the midst of being bombed to smithereens, would soon fall under the leviathan of the Nazi war machine. Honestly, only a few Nazi blunders, and the extraordinary fortitude of the Britons, their prime minister and their King prevented England from being successfully invaded for the first time in 974 years.

The Crown, whose 10-episode first season was released via Netflix this past November, is an absolutely riveting and masterfully acted and directed series about the young Queen Elizabeth II (i.e., the current monarch of the U.K.). Taking place largely in the late 1940s and early-to-mid 1950s, we witness Elizabeth coming to terms with responsibility and womanhood and see how her immediate family buckle and strain underneath the yoke of royal duty. It’s an excellent (if unintended) sequel to The King’s Speech (about Elizabeth’s father) and an effective prequel to The Queen (about grumpy, set-in-her-ways AARP-era Elizabeth). Honestly, you can watch all three of these monarchical dramas and have a splendid time and also get a fairly good grasp of 20th century British history. True, Claire Foy, who plays Elizabeth II in The Crown, is distinctly perkier then the authentic specimen, but that’s really not such a big deal.

On most every level, The Crown is top notch, and it meets the following essential criteria for a Big HEAD (Historical English-Accented Drama): Did it encourage unhesitant binge watching? Yes. Does it feature a former Doctor Who? Why, yes it does: Matt Smith plays Elizabeth II’s husband, Prince Philip, who is having a great deal of trouble accepting the subservient role that being the consort of the Queen requires. Smith has unconvincing blond hair and relatively convincing eyebrows and his clench-jawed, tense performance is against type enough that (relatively quickly) you are able to watch him without thinking, “Ah, the Doctor!” Does The Crown feature an American actor best known for sitcoms absolute killing it in an intense, English-accented part? Yes! John Lithgow, who is essentially the co-star of the series, plays Winston Churchill, and he kills it. Does The Crown have a major supporting player who we know from a culty Britcom? Uh huh. Ben Miles, who was in Coupling, is superb as Peter Townsend, the divorced friend of the family who becomes the paramour of the Queen’s youngest sister. Are there any actors in The Crown who have played other English Royals in film and TV? Alex Jennings, who plays The Duke of Windsor (much more on him very shortly), played the Duke’s great nephew, Prince Charles, in The Queen (that’s the one with Helen Mirren); and series star Claire Foy played Anne Boleyn in Wolf Hall. Does the series feature any major actors from Game of Thrones? Stephen Dillane, who played Stannis Baratheon in Game of Thrones, is the primary guest star in one episode.

Which is all to say it’s a damn good show, splendidly dressed, directed with cinematic aplomb, and I eagerly await Season 2. But…

The first requirement of any Big HEAD: “First, Do No Harm.” In other words, although bending some facts to fit the narrative may be essential, one should avoid making any deeply offensive errors. And there’s a big, fat one in The Crown.

The Crown begins in 1947, 11 years after Edward VIII (David Windsor, a.k.a. the Duke of Windsor) has abdicated the throne of England to marry Wallis Simpson, a twice-divorced American woman. For various complicated, archaic and hard-to-dramatize reasons, in 1936 the Crown and the government refused to allow David, who was then Edward VIII, permission to marry Wallis; David professed that he could not rule without his loved one at his side, so he became the first true British monarch to formally abdicate (technically the third to abdicate, but please, don’t force me into a tedious parenthetical aside). Listen, it’s all a lot more complicated than that, but that will have to do.

After the abdication, David’s younger brother, Albert, who had not been groomed to assume the throne, became King George VI, and George VI’s 10-year-old daughter, Elizabeth, became the heir to the crown. This is all well detailed in The King’s Speech; however, I have been informed that there is an entire generation who only knows history if it has been parodied in The Simpsons or Family Guy, and to my knowledge, neither of these fine shows has dealt with the abdication of Edward VIII.

Throughout the series, the Duke of Windsor is portrayed as an effeminate and amusing uncle who sometimes dispenses wise, old-queeny advice to the young Queen. We see him as a slightly pathetic, mournful character.

But here’s what The Crown omits: The Royals—that is, George VI and, after his death in 1951, the new Queen, Elizabeth II—didn’t just hate David Windsor for abdicating and putting the seismic responsibility of the throne onto their family (that’s the story The Crown tells). In reality, they also hated David and Wallis for, well, being seriously pro-Nazi and for publicly talking about how the British were definitely going to lose the war. Most significantly, the sitting Royals hated David and Wallis because it appeared that they had attempted to cut a deal with the Third freaking Reich to put them back on the Throne.

But here’s what The Crown omits: The Royals—that is, George VI and, after his death in 1951, the new Queen, Elizabeth II—didn’t just hate David Windsor for abdicating and putting the seismic responsibility of the throne onto their family (that’s the story The Crown tells). In reality, they also hated David and Wallis for, well, being seriously pro-Nazi and for publicly talking about how the British were definitely going to lose the war. Most significantly, the sitting Royals hated David and Wallis because it appeared that they had attempted to cut a deal with the Third freaking Reich to put them back on the Throne.

(By the way, this is all pretty well documented, but since I am going to eschew—Eschew! Gesundheit!—footnotes and citations in this piece, I highly recommend two books that deal extensively with this subject: Princes in War by Deborah Cadbury and Operation Willi by Michael Bloch.)

David and Wallis Windsor had long shown disturbing pro-Nazi sympathies. During David’s brief, 10-month reign as King, Wallis had a peculiarly close relationship with Joachim von Ribbentrop (who was then the Reich’s ambassador to England), and Ribbentrop boasted that they were sleeping together (bizarrely, he specifically noted that they had made sexy time on 17 different occasions); and virtually the very first thing the Windsors did after the abdication was go on a long “good will” tour of Nazi Germany, in which they met enthusiastically with Hitler and other Nazi leaders (even 80 years later, this seems like an exceedingly odd and provocative thing for an ex-King to do). Once it became clear that the war was going badly for the British, the Windsor’s regularly communicated with agents of the Reich, who loved telling David and Wallis how wonderful it would be if they were back on the Throne.

(Eventually, in an effort to keep them as far out of the loop as possible, Churchill and the King made the Duke of Windsor governor of the Bahamas. Even there, they retained contact with agents of the Reich.)

At the very least, we now known that David and Wallis Windsor were keeping channels open with the Reich and hoping to be restored to the monarchy if the Nazis successfully invaded Britain; at the very most, the Windsor’s were passing on state and military secrets to the Nazis and had cut a deal to assume the throne once the Swastika was flying over Buckingham Palace. The reality is probably somewhere between the two, leaning toward the latter: Wallis Windsor was very eager to become Queen and aggressively pursued any avenue that might lead to that outcome, and her husband was dumbly going along with the plan.

It’s an ugly fucking story. So ugly, in fact, that after the war, Churchill and the King attempted to destroy all evidence of David Windsor’s betrayal, since they thought if news leaked out that the former King was a traitor, it would destabilize the very foundation of the Monarchy.

The Duke of Windsor never really changed his tune (he died, pathetic and cuckolded, in Paris in 1972). Even decades after these events, the Duke continued to say that the Second World War had been unnecessary, and he blamed British involvement in the War on “Roosevelt and the Jews.” The Duke and Duchess were truly awful people; and although I really like The Crown—and I look forward to Season 2—it is deeply offensive to portray David Windsor as anything other than a notably unintelligent Nazi-sympathetic shit stain. 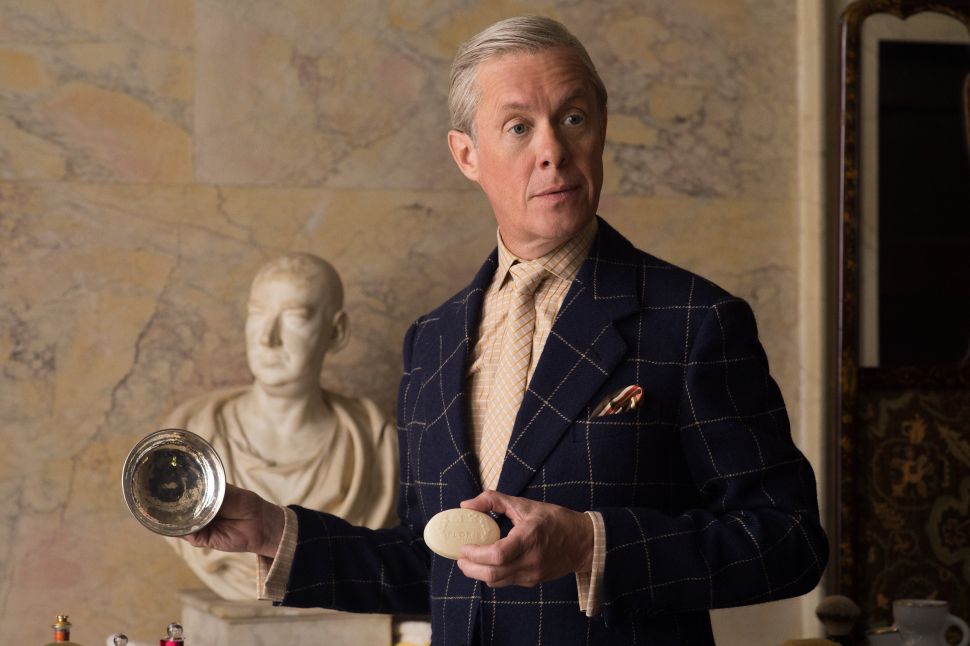