Welcome to the season 2 recaps of The Magicians. I’ve been practicing my finger tutting all month and I’m ready to dive in.

Last week, at the Hall of Magic pop up in Brooklyn before show’s premiere, I got to talk with author Lev Grossman and Hale Appleman, who plays Eliot, and I asked Grossman whether it was difficult for him to see changes between the show and his novels. “You’d be surprised,” he said. “The plot stuff is not that hard to let go of. The stuff that turns out to be crucial to me is more about the characters, who are surprisingly intact on the show. The reason I wrote The Magicians was I was sick of a lot of fantasy clichés, and I didn’t think magic felt real anymore. SO I tried to turn over as many of those clichés as I could. My fear was that they’d be put back in, and we’d be back in the cartoon fantasy world, but that’s not the case. They do a really good job of keeping the edge on the show.”

Of course, having read the books, you can catch the in-jokes aimed at you—the best part of the show is its ability to make seamless meta jokes. (My favorite example: the librarian in the Neitherlands addressing our heroes. “Quentin, Alice, Penny, Eliot, and Janet,” “My name’s Margo,” “This time.”)

An aside: Margo/Janet is becoming far and away my favorite character on this show. Actress Summer Bishil has totally mastered the combination of vulnerable and badass that let’s her get away with all of the funny lines and constantly breaking the fourth wall.

Season two opens in Fillory, the magical land that finally allows The Magicians to live up to the fun of its premise: what would happen if a bunch of 2017 twenty-somethings were sent to Narnia? That sound fun to you? It should. Start watching the Magicians so we can all talk about it together and play “Marry, Fuck, Kill” with Quentin, Eliot, and Penny (Kill, Marry, Fuck, obviously).

Fantasy settings on television can often look really cheesy. If you’ve ever seen an episode of Doctor Who, you know that it takes writing by Neil Gaiman and the full commitment of England’s finest classically trained actors to prevent low-budget monsters from descending into full camp. And so when I say this, I mean it with the full authority of someone who has suffered through her fair share of terrible CGI: The Magicians looks gorgeous. Whatever combination of green screen and actual sets they’ve designed, the effect is seamless.

That all said, let’s get into the actual episode.

First we get a very helpful “previously on” to remind us of the climax of season 1: the Brakebills kids and Julia go to Fillory and commission a dagger that can kill The Beast (Eliot has to get married to pay for it, and turns out he’s the high king of Fillory. Fun!); Alice drinks ram semen to get supergod powers so she’ll be able to fight said Beast who turns out to be Martin Chatwin who ends up completely kicking their asses, killing Alice and Eliot and Margo and cutting off Penny’s hands because Julia betrays them—she had been raped by a trickster god named Reynard the Fox and aligns herself with Martin Chatwin so he’ll help her kill Reynard.

Deep breath. Still with me?

The episode proper begins with Quentin running through a forest to find help while heavy techno new-wavy music plays in the background. This provides us our first real glimpse of Fillory: two moons, lollypops growing on bushes, and… a gingerbread house. Turns out the witch (well, more of a healer and gardening enthusiast) inside will help, but only for a vial of Quentin’s blood. She’s not really important—in fact, I’m not sure she serves any purpose at all because, immediately after Quentin gives the blood, it will turn out he doesn’t need her help at all. Maybe she’s just to reinforce the idea of Fillory for the viewer: it’s if the fairy tales you read about when you were a kid were real—both less sinister and more sinister than you thought it would be. “We only look whimsical,” is something of a thesis statement for Fillory’s various fauna.

But, like I said, before the witch helps, Quentin’s fallen friends just… appear, alive and totally unharmed, the, uh, semen that Alice drank before giving her enough power to resurrect everyone. It’s a little convenient, sure, a bit “your mother’s sacrifice has been protecting you all this time, Harry!” and, hey, how did they randomly find Quentin who had just been randomly running through the forest? Having all of the character back alive and well (not to mention still having Martin Chatwin still kicking it) also leaves us one climax short of where we were supposed to be in the books at this point. But, it’s like I said before. Just, take it or leave it. Enjoy the ride on this beautiful show about magic.

So our magically resurrected heroes (minus Penny’s hands) return to the magical wellspring, the source of all magic, a place that looks like the office where Christopher Plover, the author of the Narnia-like Fillory books, had molested Martin Chatwin. The magic sources are seriously depleted, which means they can’t access any more power which seems like it’s going to be a major problem later on, especially in a world that, as Margo says, is happy to behead its heroes halfway through season one (“If we even are the heroes. “We might be comic relief.” Oh, how I love you, Margo!)

Without wellspring magic, our heroes head to the castle armory to try to find the battle magic that Rupert Chatwin consulted to apparently win the Battle of the Bulge. Good for Rupert Chatwin.

Since Penny still has no hands, he sets off for a healing river, accompanied by Margo because she’s cool and smart and should be in every scene. At the river, Penny has his hands sewn on his body by a friendly stranger who seems like the Fillorian equivalent of a pushy bathroom attendant. And it works! (From my notes: “Penny’s hands are back—this is a rewriting of the book because now Penny is hot.”)

But, of course, since nothing can be easy, the bathroom attendant dude curses Penny’s hands because he didn’t tip. Penny’s hands working and then not working already seems to be a long-running and semi-annoying theme of this season. Just… you know, shit or get off the pot with regards to Penny having hands that can do magic or not.

Back in the real world, Julia has an uneasy alliance with Martin Chatwin. She’ll give him the magic murder blade if he helps her kill Reynard. Chatwin apparated them into a ball pit area at a kid’s restaurant, which falls into a pretty problematic trope: someone who was molested as a child becoming a weird perv himself. Even though Chatwin claims, “It’s perfectly innocent,” I couldn’t help but feel the show was milking some creep factor out of this grown, well-dressed Englishmen who’s become an irrevocably molest-y monster because he experienced sexual trauma.

Although The Beast in the books was pants-shittingly terrifying, and the show gave him a horrifying introduction: stepping into a frozen classroom, face full of moths, and ripping out Dean Fogg’s eyeballs, now Martin Chatwin is like an effete evil guidance counselor to Julia. Sillier, seemingly trustworthier, and more musically inclined. Despite Julia’s reluctance, Chatwin takes out her shade to show her how much better life is without feelings. “What did we learn about trusting strangers, Julia?!?” I shouted at the screen. Why is she trusting this objective villain? And yet… when she tells him to put it back, he does. Hm. (In the books, am I wrong, or did Reynard take Julia’s shade?)Martin tells Julia that there’s no glory in martyring yourself to pain, which all things considered, is pretty sound. He used to be used to be fucking brutal and now he’s just… polite advice? I guess we’ll see.

After another improbably easy reconnaissance in the Fillorian forests, the gang is all back together and crossing a rainbow bridge to claim their crowns as the kings and queens of Fillory (set to, I might add, a banging soundtrack).

But, like any ancient relics of any importance, they’re guarded by an ancient knight. The gang will have to answer trivia to prove their children of Earth. “Only the true high king will hold the answers in his heart.”

“He—he was on a lot of TV shows,” Alice deadpans.

The next question: “This hit single is performed by offspring of famous entertainers.”

“Dude, that is crazy vague,” Queen Margo says (she is always a queen.)

Once the hint is given (“Beach Boys”), Alice and Margo get it right away: “’Hold On,’ by Wilson Phillips.”

But the best moment in the entire glorious scene takes place when Eliot volunteers his knowledge of Patrick Swayze. (“You know of Swayze?” the old knight says in disbelief.)

Eliot takes off his jacket, performs a perfect Dirty Dancing monologue in a totally solid Swayze voice, and it’s official: the high king of Fillory has proven himself.

Once they’re crowned, Quentin talks Alice into showing off her power by conjuring a tree, and they make out even though Alice promises they’re not back together. Enjoy your borrowed time, kiddos.

Eliot begins running a kingdom alongside his Fillorian wife that he married in the last season, and, because he’s high king, he can’t go back with his friends to Brakebills to find the books on battle magic that had already been taken from the armory.

Time is messed up and non-linear between Earth and Fillory—Eliot is (justifiably) nervous that his friends are leaving him to go back to Earth and even though only days might pass for them, it could be hundreds of years on Fillory and he’ll die alone, waiting for his friends to come back. It’s a sweet, heartbreaking moment, but I couldn’t help but wonder why they can’t just leave Margo with him. Let’s just have a whole show of Eliot and Margo running Fillory.

“Elliot is struggling to reconcile letting go everything he built for himself, and very much would like to go back in time and stay in his safe Brakebills bubble forever,” Appleman told me. “So it’s a journey of wanting to retreat into the past, and through that, finding your adult responsibilities.”

It’s glib and lazy to compare every vaguely dystopian universe or fantasy villain to our current president, but there is a thread of something similar to what America has been experiencing in this very funny fantasy show: they’re in a universe that is not as safe as they thought it would be. The universe is not prescribed with a neat narrative. The institutions—of Fillory, of Brakebills, of magic itself—are far flimsier than one might have hoped or expected and our heroes are left with the terrifying and profound realization that no one is coming to save them. If we don’t handle this, it won’t be handled.

I’m having a lot of fun watching The Magicians—hope you are too. See you next time! 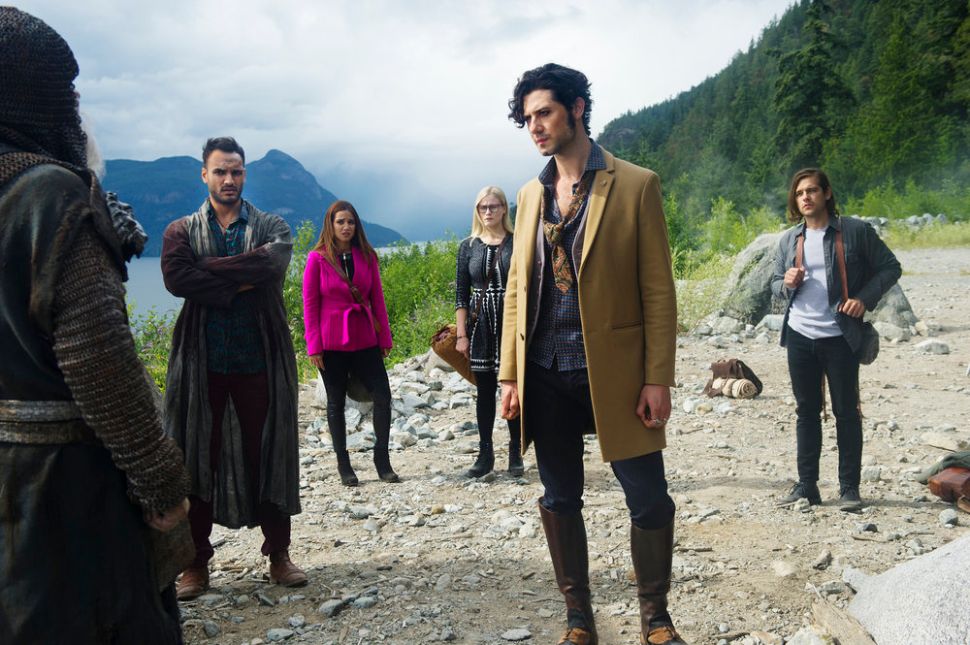