Well, two weeks ago they aired an episode called “Josh Is The Man Of My Dreams, Right?” and I have been thinking about it ever since.

Crazy Ex-Girlfriend has a glut of attractive men. We have the adorable Josh Chan, boyfriend goals White Josh, and the memory of salty but lovable alcoholic Greg. We’ve also gotten an office newcomer, played by Scott Michael Foster (oh my god, remember Cappie from Greek? He was Cappie from Greek!”) 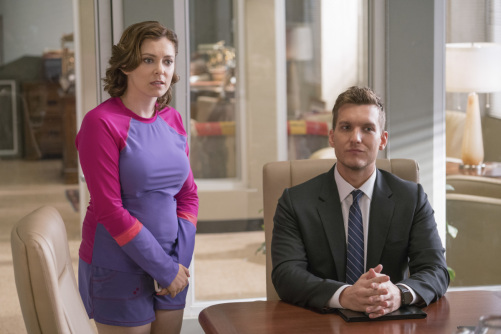 But that’s not who I’m here to talk about.

I’m here to talk about this guy.

The metaphorical representation of the Santa Ana winds.

Look at his expertly tailored suit. Our current president should take notes on that fit. Listen to his gorgeous Frankie Valli falsetto. The Santa Ana Winds Guy is all four members of the Four Seasons combined with all four actors playing the Four Season in Jersey Boys, and multiplied by ten.

The Santa Ana Winds Guy is a sexy trickster god. He is a bad boy. He doesn’t do what he’s supposed to do. He causes trouble. Walking through traffic like he’s in the opening number of La La Land? No biggie. Blowing magic glitter cocaine dust into Rebecca’s nose while she sleeps to give her a weird dream? Easy. Causing an elevator to stop while Rebecca is alone with Cappie? Child’s play.

Gay? Straight? Anything in between? It doesn’t matter because he is the wind and the fucking wind doesn’t have a sexual orientation. He is mysterious and unpredictable. Santa Ana Winds Guy will sweep into town, take you to bed, and depart in the morning, leaving you with only allergies and the memory of his sweet, sweet voice.

The Santa Ana Winds Guy is an agent of chaos and he is the only lover worth having in these chaotic times. He brings whimsy and forest fires. And he can get it.