There’s a pretty stark difference between the online presences of the current president and the president-elect, especially on Twitter. While tweets from Barack Obama via his personal account and the POTUS handle (although rarely written by him personally) are quite reserved and presidential, Donald Trump (who just announced he won’t take over POTUS) runs things just a tad more off the cuff.

But what if Obama tweeted like Trump? You don’t have to wonder, because the new parody account @ImmatureObama is doing a pretty decent job showing us. The account, which joined the platform last week, has been retweeting President Obama’s real tweets and translating them into Trump-speak, complete with “crooked,” “sad!” and all.

I won 2 elections BIG TIME! 8 yrs, loved by all- economy great, SAVED auto industry. US would be rubble w/ @MittRomney or @SenJohnMcCain! https://t.co/xsWTfXmoNc

Washed up Senate blocking my SCOTUS nom. UNFAIR! I make the best picks & they're jealous. JEALOUS of my great picking skills. A sorry state. https://t.co/rXNCUAhqV7

.@FoxNews has been hating for 8 years. FAKE NEWS wont save your failing network, with LOW ratings and ugly anchors that nobody likes! #Sad https://t.co/OeUQuLvktL

Gets off-topic and spreads false information.

Haters deny it, but here's proof that Arnold Palmer came to me for advice on his short game! I'm the master of America AND golf! https://t.co/29HaurCr5K

And there are plenty of insults, of course.

GOP still trying to destroy #Obamacare. Pathetic! No plan to replace it because these fat losers don't have any good plans like mine. SAD! https://t.co/IoC0WBXtJE

Only the best can land a broad like Michelle. Prude GOP talk trash- just JEALOUS that there wives are duds in the sack! #FLOTUSInTheSheets https://t.co/NhHPE7rWrc

Obama might be out in a few days, but at least we know Twitter will never be boring. 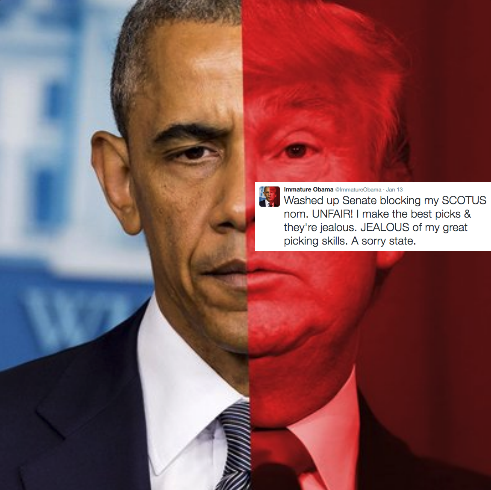