Neighborhood watchman George Zimmerman killed Trayvon Martin in Sanford, Florida after a confrontation in 2012, while NYPD Officer Daniel Pantaleo killed Eric Garner in a chokehold in Staten Island in  2014. Both Zimmerman and Pantaleo avoided jail time—as has South Carolina Officer Michael Slager, the cop who shot Walter Scott in the back after a routine traffic stop in Charleston, and who subsequently escaped murder charges thanks to a hung jury.

“The mother of Trayvon Martin is with us, the mother of Eric Garner is with us, the brother of Walter Scott is with us. That’s why we’re marching, and we won’t let them down,” shouted Sharpton. “We’re going to march to the Martin Luther King statue, and in the shadow of Dr. King, we are going to declare: We shall not be moved!”

As president of the National Action Network, Sharpton explained that the organization has been supporting those affected by the unjust killings of black men across the United States. “We work with the families that have suffered. We’re going to be there until the end,” he said at the rally organized by NAN.

Sybrina Fulton, the mother of Trayvon Martin, made a simple request for “compassion” during her few remarks in front of the chanting crowd that was riled up by Sharpton’s call for “non-negotiable criminal justice reform all over the country.”

“I want you to have the same compassion for me as if it were your child. It’s so very important that we look out for our young people, because they can’t defend themselves,” said Fulton. “I continue this fight because my son was shot down, and it made me stand up. So won’t you stand with us? Won’t you go back to your community and stand up, and make a difference?”

Florida’s “stand your ground” statute prevented the police from arresting Zimmerman because they could not produce sufficient evidence that he was not acting in self-defense. Zimmerman was later found not guilty of manslaughter and second-degree murder charges, and was cleared of civil rights violations after a Justice Department inquiry.

President-elect Trump’s nomination of Alabama Sen. Jeff Sessions to head the Justice Department has outraged civil rights groups like the NAACP and the ACLU due to his troubling history that include allegations of using racial slurs and sympathizing with white nationalist groups. Al Sharpton highlighted Sessions’ appointment to Attorney General as a major concern for minorities who have, and could be marginalized by the criminal justice system, as the senator is firmly against federal intervention in cases like those involving Trayvon Martin and Eric Garner.

Gwen Carr, the mother of Eric Garner, explained to the crowd that the rally at MLK’s statue was only the first step in combating any reversal of the progress both Eric Holder and Loretta Lynch, the first black male and black female Attorneys General have made during their service in the Obama administration. Lynch in particular initiated the federal investigations into Slager and Pantaleo.

“This is the beginning, when we leave here, we have work to do,” Carr said said.

Carr explained that one of the weapons minorities have to ensure that criminal justice policies and police reform are steered in the direction of justice is voting, and the ability for minorities to do so. “When a lot of you go back home, it will be like nothing happened. We can’t do that. We have to stand. There are things at stake that we have to address”, she explained. “We must not let them embarrass our forefathers by letting them take away our voting rights. That’s the most powerful weapon we have, and we won’t stand by quietly while they manipulate the voting rights. Our forefathers blood is on that bill, and we most uphold them.”

“For police reform, we must remember, and must demand that our communities be policed fairly,” Carr concluded. “We must demand that they respect human life better than they do. We have to stand together on this”

Al Sharpton explained to marchers that there is too much injustice in black communities “to play games with the Justice Department.” He referenced the case of Scott. Officer Slager was charged with murder after a video surfaced contradicting his account of their encounter on the official police report.

That case will roll over to the Trump administration, and to Sessions, if he is confirmed as Attorney General. South Carolina prosecutors will also retry Slager for murder in March of this year.

“It’s not over until it’s over,” said Rodney Scott, brother of Walter Scott. “We sat in a courtroom for seven weeks looking for justice, and being peaceful about it. I don’t know about you, but i’m tired of being peaceful. I’m tired of justice not being served to all people.”

Scott asked those in attendance for continued support, and to be there for his family as they go to trial again in March. “We’re going to want justice, and like my mother said, it’s not over until God says it’s over.”

Al Sharpton explained that these families have advocated for nothing but justice. “They have not called for one act of hate or one act of violence. The question, Mr. Trump, is not how we act. The question is how you all are going to act for justice,” he said. “We’re here because we fought hard to make sure this administration heard our cry, and we are not going away now. Criminal justice and police reform must go forward.”

Sharpton challenged congress at Saturday’s march to not be “weak-kneed,” and to have a “backbone” when dealing with cases similar to the killings of Trayvon Martin, Eric Garner, and Walter Scott.

“Criminal justice and police reform must go forward,” he said. 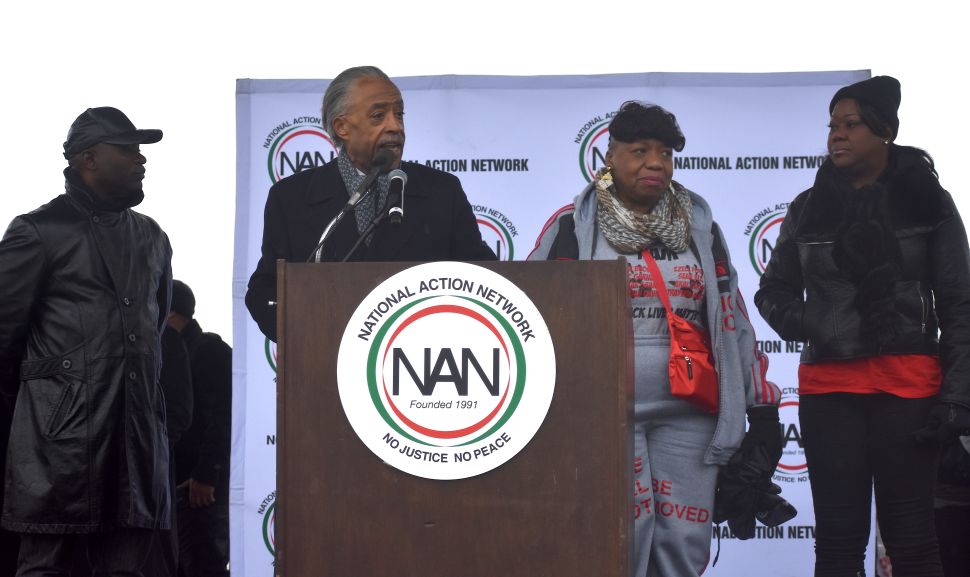