On the first day of his class on ancient Chinese philosophy, professor Michael Puett makes a promise to all the students:

If you take the ideas in these texts seriously, they will change your life.

Big words. But he may not be crazy — his class is currently the third most popular one at Harvard. Luckily, you don’t have to brave a winter in Cambridge to hear what he has to say…

Michael Puett and Christine Gross-Loh are the authors of The Path: What Chinese Philosophers Can Teach Us About the Good Life.

Most people in the West assume Chinese philosophy is all profound maxims about balance and harmony…and they’re wrong. A lot of it actually says that life is messy.

…the truth is that many Chinese philosophers actually saw the world very differently: as consisting of an endless series of fragmented, messy encounters. This worldview emerged from the notion that all aspects of human life are governed by emotions, including the endless human interactions that take place.

So this is looking both pretty useful and quite realistic because many of us are wondering how we can find fulfillment, happiness, and the good life in today’s very messy world.

Well, Confucius and his bros have two insights that are worth learning about that also jive with the latest findings by modern research. Alright, let’s get to it…

When you think about Confucius, you probably think wise sayings that are big picture and, frankly, kinda vague. Wrong.

His classic book, The Analects, is often the exact opposite. The guy wrote about how high he preferred to position his elbows and the intricacies of how he acted at dinnertime. You’re probably thinking what I’m thinking: Huh?

Here’s the deal: Confucius wasn’t into the big metaphysical questions. He was practical. He believed living the good life was bottom up, not top down. And to him, the focus was on the little rituals of life.

And he wasn’t crazy. Research shows 40% of what you do every day is done out of habit. If you get the little rituals down — if you get rid of bad habits and build good ones — then nearly half of your life will be lived well. Sounds like a good deal.

You often label yourself as this kind of person or that kind of person. “I’m emotional. That’s just how I am.” or “I have no attention span. It’s the way I’m wired.” These days we try to “know our authentic self.”

Every person has many different and often contradictory emotional dispositions, desires, and ways of responding to the world. Our emotional dispositions develop by looking outward, not inward. They are not cultivated when you retreat from the world to meditate or go on a vacation. They are formed, in practice, through the things you do in your everyday life: the ways you interact with others and the activities you pursue. In other words, we aren’t just who we are: we can actively make ourselves into better people all the time.

And a lot of science agrees. UVA professor Tim Wilson has shown that often it’s not thinking you’re a good person that makes you altruistic. It’s the reverse. When we force ourselves to do good, we see ourselves as good.

UCLA neuroscientist Alex Korb has written about how happiness and depression aren’t as hardwired as you may think. Little things you do habitually can create an upward spiral of positive feelings in the brain.

From The Upward Spiral:

Everything is interconnected. Gratitude improves sleep. Sleep reduces pain. Reduced pain improves your mood. Improved mood reduces anxiety, which improves focus and planning. Focus and planning help with decision making. Decision making further reduces anxiety and improves enjoyment. Enjoyment gives you more to be grateful for, which keeps that loop of the upward spiral going. Enjoyment also makes it more likely you’ll exercise and be social, which, in turn, will make you happier.

Confucius knew that the little rituals we choose to engage in have the power to snap us out of negative patterns or the influence of our surroundings.

When you shower and get dressed, you feel ready for the day. When you organize your desk, you feel more in control. The ritual lets you be a different you for a while, and that’s far more powerful than merely urging yourself to “get in gear” or “calm down.”

He understood that seemingly minor actions such as arranging the place where people would sit with him would create a different environment that could affect them profoundly. The modern-day equivalent of the mat ritual might be our dinnertime routines: when we set the table, perhaps laying out placemats and napkins, even lighting candles, we step out of our regular lives and create an alternate reality for ourselves and those with us. Even if the day has been stressful, if there’s been a lot of conflict, there’s no need for someone to declare, “Okay, it’s time to stop fighting and relax now.” The dinner table ritual simply creates a break that allows everyone to enter a different mode.

Harvard Business School professor Francesca Gino has found that having a little ritual before a meal actually makes the food taste better. Want a happier family? Get thee some rituals.

From 100 Simple Secrets of Happy Families:

Consistent family rituals encourage the social development of children and increase feelings of family cohesiveness by more than 17 percent. – Eaker and Walters 2002

You’re going to have habits; that’s inevitable. Wouldn’t it be better if you decided what they were, rather than having them decided for you? And according to Confucius, you’re not just creating the way that you’ll do things in the future. You’re creating the person you’ll become.

(To learn the scientific steps to ending bad habits once and for all, click here.)

Alright, Confucian rituals for the win. Those little things make a big difference. But how do we approach our big goals? Do you need a life plan to be happy and successful? Nope…

Mencius is another ancient Chinese philosopher that Michael Puett covers in his class. And Mencius also believed life was messy.

While you’ll nod your head when I say that nobody can predict the future, you still act like there are certainties when you make plans. Then things inevitably go sideways and you get angry that life didn’t follow your plan.

But I’ll give you the benefit of the doubt. Maybe you’re an awesome planner. Maybe you’re like the protagonist in a heist film, synchronized watches and all. Here’s the problem: it isn’t just life that’s messy. You’re messy too. You can account for many factors in the world that might change, but what if you change? What if what you want changes? Uh-oh…

This is what leads to a midlife crisis. You executed your plan perfectly. But in the process your goals shifted and now there’s no way to change course.

When you hold too tightly to a plan, you risk missing out on these things. And when you wake up one day in that future, you will feel boxed in by a life that, at best, reflects only a piece of who you thought you were at one moment in time.

As Oscar Wilde once quipped: “There are only two tragedies in life: one is not getting what one wants, and the other is getting it.” So Mencius says in an uncertain world (which contains an uncertain you) don’t focus on rigid life plans — cultivate opportunities.

Keep giving new things a try. Have hobbies. Develop different sides of yourself.

Most of us have hobbies and interests we pursue on the weekend or in our free time. We often don’t think of those things as relevant to figuring out what we want to do with our life. And yet laying the ground means something as simple as scheduling time to take part in activities that speak to the different sides of yourself that you are interested in developing: joining a wine tasting class, learning how to paint in watercolor, or brushing up on your high school French once a week in a language swap. By proactively building room in your life for all sorts of possibilities, and then remaining open and responsive, you are akin to a farmer preparing his field so that his crops can flourish.

Sounds nice, but is this really all-around good life advice?

Yup. Trying different things and making “little bets” is how most creative geniuses develop their best work. But there’s an even bigger benefit: it makes you lucky.

When professor Richard Wiseman studied what lucky people have in common he found they were open to new experiences and more likely to act upon chance opportunities in their lives. And when he had “normal” people try those things, they became luckier too. Here’s Richard:

Lucky people just try stuff. Unlucky people suffered from paralysis by analysis. They wouldn’t do anything until they walked through every single angle and by then the world had moved on. They don’t gain the benefits of learning through doing. I’m a big fan of starting small, trying lots of projects, seeing what works and what doesn’t, and iterating based on feedback.

(To learn the four things that can make you luckier, click here.)

Okay, we’ve got two pieces of ancient wisdom. Let’s review and see how they can work together to make sure you live the good life…

Here’s what you can learn from ancient Chinese philosophers:

There’s no simple turnkey solution to life. And anybody that says there is is selling something.

Believing “life is messy” isn’t cynical or a rationalization, it’s realistic. Saying “I can be anything I want to be” is naive and untrue. You can’t control the future. But saying, “I don’t know yet what I can become” is hopeful and honest.

Rather than going into all of this thinking, “I can be anything I want to be,” the approach you’re taking is “I don’t know yet what I can become.” You don’t know where any of this might take you; it’s not possible to know that now. But what you learn about yourself and what excites you won’t be abstract; it will be very concrete knowledge born of practical experience… You become the fruit of your labor.

Sounds like a realistic vision of the good life to me.

Join over 280,000 readers. Get a free weekly update via email here.

New Neuroscience Reveals 4 Rituals That Will Make You Happy
New Harvard Research Reveals A Fun Way To Be More Successful
How To Get People To Like You: 7 Ways From An FBI Behavior Expert 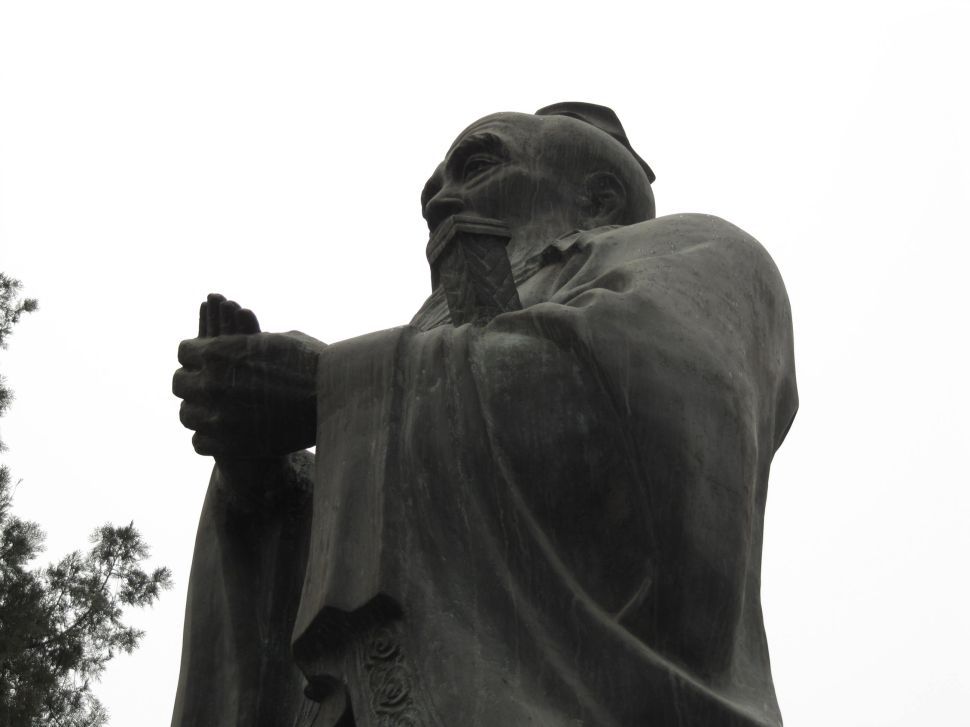