A German appellate court upheld the decision of a lower court that three Palestinians who tried to burn a synagogue were not engaged in anti-Semitism. They were merely exercising their basic civil rights to protest against the Israeli government. Charges against the three were dismissed.

It is akin to saying that Kristallnacht was merely a large civil rights protest.

The German judicial mind could not grasp that holding German Jews responsible for what Israel does to defend its citizens from thousands of rocket and missile attacks is the very essence of anti-Semitism. For those on the left who keep telling us that anti-Zionism is not anti-Semitism, maybe the German judicial decision will open their eyes.

If America had the grave misfortune of living under another term of Barack Obama, I wonder whether an attempt to burn a synagogue here would likewise be defined as a legitimate protest against Israel.

It is not as absurd a thought as Obama’s partisans might think. After two votes at the United Nations denying the Biblical and historical ties of Jews to the land of their ancestors, the Obama administration ensured that the Jewish quarter of Jerusalem, as well as much of the city itself and the lands known as Judea and Samaria, were not only illegally inhabited by Jews but also had to be turned over to a Muslim entity that promised to make them Judenrein—an entity whose raison d’etre is the elimination of both the Jews and their state.

Indeed, it has not been a good season for Jews or Israel. On January 14, the Pope received the still unelected Palestinian Authority President Mahmoud Abbas, and the Vatican used the event to showcase its diplomatic recognition of a non-existent Palestinian state. This, however, is not unexpected. Even Yasser Arafat gave diplomatic recognition to Israel before the Vatican did.

And then there was the January 15, 2017 diplomatic conference in Paris, where 72 nations were to carve out a Palestinian state, as if the only territorial dispute in the community of nations were the one between the Jews and the Palestinians. Forget that Turkey divided Cyprus, Russia now controls the Crimea, China has eliminated the cultural and political entity of Tibet, and both Hamas and the PLO lay claim to Gaza. There are no campus demonstrations chanting, “Free Gaza from the tyranny of Hamas.”

The UN cannot make international law, and the Paris meeting itself was destined to be irrelevant in terms of resolving the conflict. It will be like a wedding without a bride and groom, observed Israeli Deputy Foreign Minister Tzipi Hotovely.

However, the conference could have further delegitimized the State of Israel and, like the German court ruling and previous UN resolutions, provided justification for violence in Israel and against Jews throughout the world.

But that did not happen. The Paris meeting turned out to be a vacuous non-event. President-elect Donald Trump let it be known that he did not take kindly to a major diplomatic move five days before he was to take office.

British Prime Minister Theresa May understands what the French do not. It is time to build a relationship with the new American administration. Britain simply sent a non-participating envoy to the event, further sealing its irrelevance.

In the last days of the Obama administration, among its ignominious bequests is a scorched earth policy against Israel. It is highly likely that the UN resolutions were a prelude to the administration’s end game in Paris. Both President Obama and French President Hollande were looking for a major diplomatic victory as part of their legacy, and from various accounts, the carving out of a Palestinian state was to be just that.

To describe Obama’s foreign policy as a failure is to be charitable. America’s power and prestige in the world have declined and Obama’s policies in the Middle East have left turmoil and power vacuums. As for Hollande, the least popular French president since World War II, the Paris conference was to be his shining moment.

Trump’s reaction to the UN resolution declaring the Jewish section of Jerusalem and all of Judea and Samaria off limits to Jews left no doubt in the diplomatic community that the imposition of a Palestinian state would further alienate the president-elect.

The Republicans are already talking about drying up America’s financial contribution to the UN. The American Left might not take the incoming president seriously, but obviously, the international community of nations does. 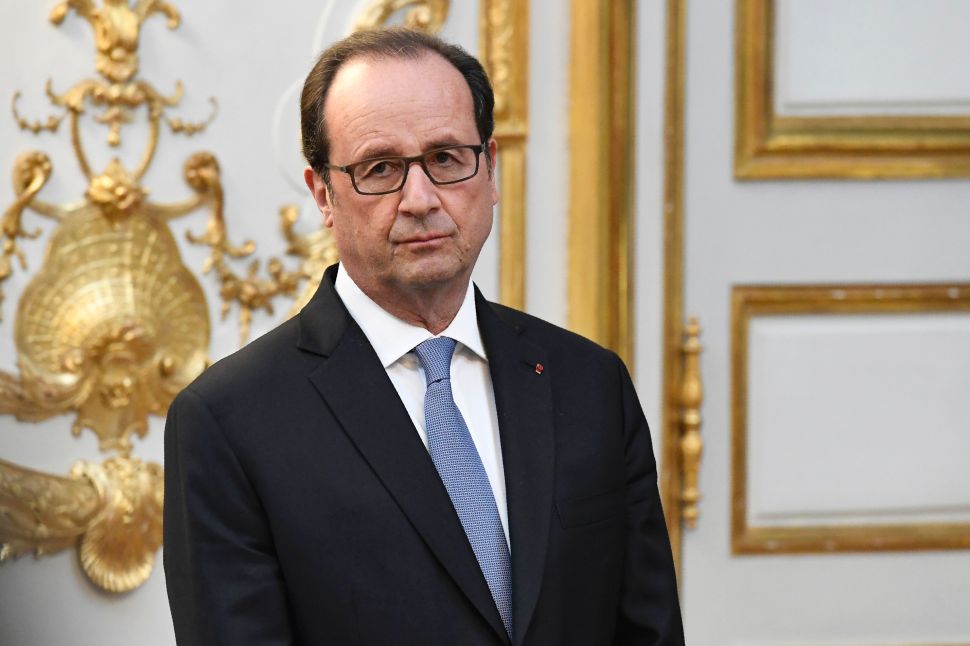