The archives of World War II hide such a multitude of footnotes that new ones are uncovered every day, and they are so varied, suspenseful, dangerous and harrowing that it’s only a matter of time until they inevitably end up in books, plays and movies. Sadly, today’s younger audiences have such scant interest in history that they think the Nazis are a new rock band. It grieves me to think how much more interested they are in iPhones and Star Wars rip-offs than in culture and world history, and how ignorant and indifferent they are, when they go to the movies, about the art of how to tell a good story on film. And so they might miss Alone in Berlin, about the life-risking attempts of a seemingly unremarkable elderly German couple with the courage to resist the growing tyranny of Adolf Hitler.

Based on a best-selling postwar novel by French writer Hans Fallada that was published in 1947, Alone in Berlin is a fictionalized account of real-life anti-Nazi resistance fighters Otto and Elise Hampel (renamed Otto and Anna Quangel in the film), who plodded along like faceless but loyal German citizens until the death of their only son in combat led them to develop a moral conscience they had never before been aware of. Although the Quangels never joined the Nazi party, Otto worked in a factory that contributed to the war effort and his wife Anna was a member of the Women’s League. One by one, they became appalled by the horrors around them, especially when an elderly Jewish friend in their apartment complex leaped to her death to escape the Gestapo. But after their boy was killed in action in 1940, their rawest emotions were aroused by the futility of war, and their anger fanned by acts of Nazi aggression and brutality that were accepted without question by the German people.

And so, in one of the most defiant moves in German history, the grief-stricken couple launched a clandestine operation in the privacy of their home to compose, write and distribute postcards left in strategic places throughout the city to warn the citizens of Berlin about the dangerous lies, cruelty and insanity of their Fuehrer. From 1940 to 1943, the Quangels’ courageous but subversive anti-Nazi propaganda denouncing the ideology of the Third Reich was labeled treasonous, and they became the objects of a massive manhunt. Ironically, the secret police tracked 285 cards to their destinations, all but 18 of them turned over to the Gestapo by “concerned German citizens.” Undaunted, Otto and Anna continued their plan, operating with caution, never leaving fingerprints, distributing methodically, making no mistakes—until the day, of course, when he makes a fatal one.

As valiant and important as the film is, Alone in Berlin is not perfect. The director is the French actor Vincent Perez, whose commitment to the material is obvious, but whose lack of experience (it’s only his third effort behind the camera) shows badly. It’s a reserved little film, unfolding in small, intricately staged scenes, and it evokes a real feeling of darkness and anxiety as well as putting the audience into the claustrophobic streets and buildings of a crumbling city under siege. But a more confident director might have mined more tension out of the story. The script is slow, the movement even slower. As a result, and in spite of Christophe Beaucarne’s murky camerawork and the haunting score by the great composer Alexandre Desplat, the film misses some palpable opportunities to ratchet up the intensity. This leaves the splendid actors to make up for the weaknesses with performances that radiate strength and integrity. Gleeson is an Irishman whose thick brogue has often been undecipherable, but playing a grieving German energized by a newfound dedication to justice, every word he utters is as clear as his sensitivity is understandable. Thompson, wrinkled and drained of color, is fearless in depicting age, but she eschews any attempt to make heroics a part of her character’s motivation. Equally sound is the film’s third star, Daniel Bruhl, as the particularly venomous chief detective, a man named Escherich. Without inviting false sympathy from audiences jaded by Hollywood versions of Nazis, Bruhl delivers a complex portrayal of an obedient cop who hates the Gestapo’s methods of torture and terrorism. The humanism fighting to surface in his soul is a refreshing contrast to the Fascist clichés in most Hollywood movies about World War II. Not flawless, but well worth your attention, Alone in Berlin has honorable intentions and is really about something in a year of overpraised movies that are, in retrospect, about not much of anything at all. 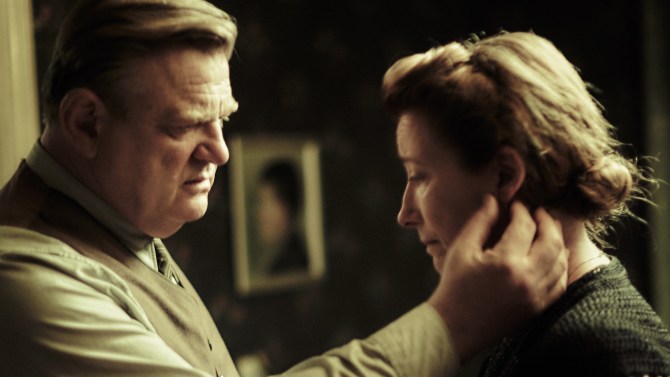