The December 29th decision by the Obama Administration to expel 35 Russian diplomats has unleashed a storm of criticism in Russia.

“Can you imagine how limited the amount of time it was and how urgently they needed to pack?” Nikolai Lakhonin, press secretary of the Russian Embassy in Washington, told LifeNews on Sunday.

This drastic step was announced as retaliation for hacking attacks alleged to be directed by Moscow and targeting American computer systems in an effort to influence November’s presidential election. The diplomats—together with their family members—were ordered to leave the country within 72 hours.

Both the timing of the expulsion and its urgency were interpreted in Russia as last-minute petty revenge from the departing Obama team, on behalf of Obama’s former Secretary of State, Hillary Clinton.

The Russians were ordered to leave before January 1, having only one day to finalize their financial affairs, terminate their apartment leases, pack their belongings and so on, as well as to prepare for a long trip home, the San Francisco Consulate General lamented on its Facebook page.

The Russian Consulate General made clear its frustration and ‘undiplomatic feelings’ toward the President’s decision.

They complained that their kids had no time to say goodbye to their school buddies. And since no tickets were left for shorter and more comfortable itineraries, they had to prepare quickly for the long trip, going first to Los Angeles by car and then by plane to Moscow.

Because in the middle of the holiday season there were not enough airplane tickets left to accommodate the number of Russians ordered to leave by the Obama administration, the Kremlin had to send a special aircraft to take the Russian diplomats and their family members home.

Representatives of Russian Consulate General in San Francisco could not hide the fact that it was ‘difficult’ for them ‘to remain diplomatic’ when talking about the issue.

The Russian plane took off for Moscow on December 31 and the New Year was greeted in-flight by the expelled Russians. Before taking off, the senior pilot announced that all the kids were personally invited by Vladimir Putin to the Kremlin for traditional Christmas and New Year performances.

Onboard the plane, among approximately 100 people urgently leaving the U.S. as a result of President Obama’s decision, was a pregnant woman and five children who were suffering from the flu, press-secretary of the Russian Embassy in Washington told LifeNews on Sunday.

A professional chef from the Russian town of Yaroslavl who had been employed by Russian Consulate General in San Francisco for three years, ‘whose mastery was enjoyed by hundreds of our guests,’ according to the Russian Consulate’s page, was also on the list of the expelled Russian “intelligence operatives.” He left the U.S. together with his wife and 2-year old son.

In addition, two retreat compounds outside New York and Washington that, according to the Obama administration, were used by Russian ‘intelligence operatives’, were closed immediately—all Russians were ordered out within 24 hours.

“I think it is despicable that they decided to take revenge on our children,” said Vitaly Churkin, Russia’s U.N. representative. “They knew all too well that in these two compounds our children spent their vacations. Now it is time for the Christmas holidays, winter break time in our schools – from January 1 to January, 10. To block access to the kids` retreats in the beginning of the holidays – is cynical from my point of view. Such ‘family values’ [they have in the U.S.].”

Russian President Vladimir Putin reacted that his government would not retaliate accordingly and would not “descend to the level of ‘kitchen diplomacy.'” The expression was loaded with hidden meaning full of contempt, often characteristic of Putin’s statements—but one might need a master’s degree in Russian history to get it:

In the last quarter of the 19th century, the Russian tsar passed a famous law that gave representatives of the lower classes access to higher education. It was nicknamed “the law on kitchen servants’ children.”

Additionally, after the Bolshevik revolution of 1917, Vladimir Lenin once famously stated that Communists would create a new type of state governance where “every female kitchen servant must learn how to run the state.”

With his expression of ‘kitchen diplomacy,’ Putin equated Obama and his team to a group of unprofessional ‘female kitchen servants’ that only accidentally grabbed the reins of state governance, incapable of professionally running U.S. foreign policy.

Not wanting to ruin his ties with the coming White House administration, Putin opted not to expel U.S. diplomats from Moscow in retaliation. He instead invited the kids of American diplomats to the Kremlin Christmas and New Year performances. He also wished the U.S. President Barack Obama and his family a happy coming new year. 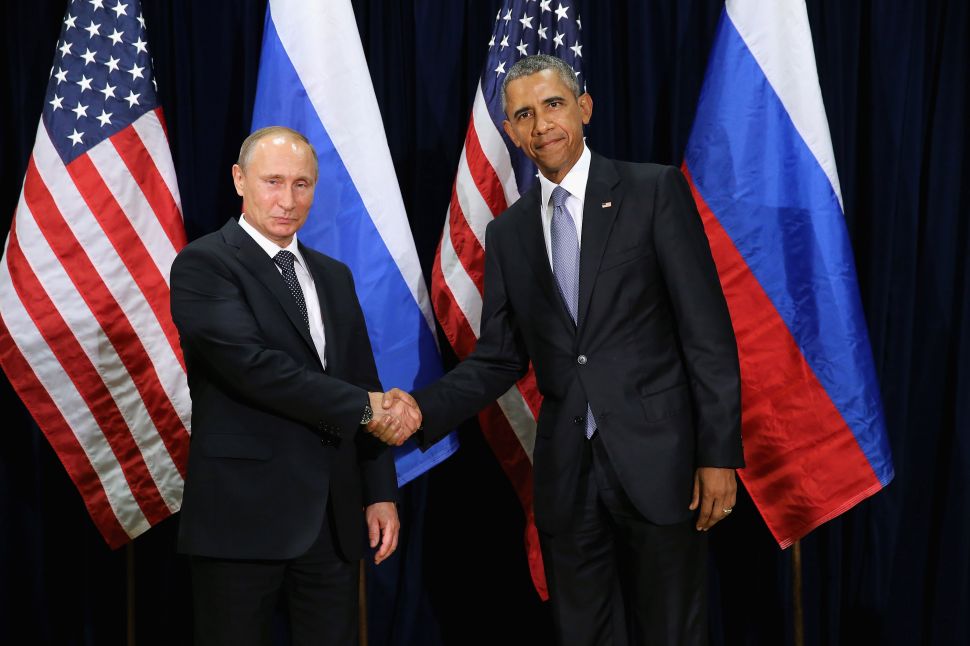