Wearable fitness is an unstoppable force. Fitbit, the market leader, boasts more than 19 million registered users and total sales of around 40 million units in 2016 alone. Few tech trends have been as ubiquitous and far-reaching in recent years, but for all the attention the quantified-self has received, there remains a clear gap in the market where well-heeled athletes aren’t measuring themselves: skiing.

Between $100 day-passes and $300 goggles, skiing is a pricey sport. An OnTheSnow survey indicates that more than one third of skiers spend between $1,200 and $3,000 on the sport each year—several times more than the amount spent by adults on other athletic endeavors.

There are a number of measurables in skiing that would be useful to benchmark progress and evaluate performance on the mountain, including the basics like distance, vertical, speed and time. There are also safety elements that would provide for the casual and advanced skier alike: a wearable with location services could help you find your friend who wandered off or it could provide another safety measure in the event of an avalanche.

There is a market and several clear use cases—so where is the Fitbit of skiing?

There have been attempts, particularly when it comes to goggles.

The Oakley Airwave line includes a tiny heads-up display along the bottom of the goggles monitors your individual speed and a built-in GPS chipset allows for tracking for vertical feet, buddy tracking, and navigation. The speakers also link to the music software in your smartphone to keep you entertained while you bounce around the moguls. Oakley’s Airwave goggles retail for $650 with competitor Recon Snow2 making their offer available for $549. At those price points, you’re talking about half of a skiers’ annual budget, which makes it clear why they’ve failed to gain an edge.

Google Glass was once envisioned as a solution for the ski-tech universe, coupling the aforementioned features with photo-taking and video-capture technology, but struggles with form factor kept Glass from finding its way into your boot bag.

The core focus of the ski-tech universe seems to be video, where the struggling GoPro reigns supreme. But despite a quality, market-leading product and efforts to capture new segments of the action sports industry, GoPro went through two major layoffs in 2016, and its stock has fallen from a 52-week high of $17.68 to around $9. It appears that GoPro is failing to convince loyal customers to buy again, which is a signal that the product they sold the first time around was too good.

While this is a start, the numbers indicate that they’ve missed the mark. It’s possible that this is a question of technology, but with major steps forward in sensor and battery technology, this shouldn’t be a constraint for long.

It’s also possible that the ski market isn’t one of early adopters, though with companies like Oakley involved, it seems that this, too, should be a thing of the past. Oakley is one of the few American brands that can be trusted in their ability to use marketing—and celebrity endorsements—to make a product line cool. Once Oakley gets its marketing machine up and running, they’ll shed the “early” part of the “early adopter” equation.

One area where a startup or tech entrepreneur may be uniquely positioned to gain traction is in social media. Many of these existing solutions rely on closed-wall software rather than tapping into existing social networks to create a viral loop with easily-sharable content. The Nike+ Run mobile application offers runners the ability to log performance and share progress on social media which has lead to free, organic exposure and an estimated 100 million downloads.

Existing ski tech solutions are also ignoring one of the largest advances that few people talk about: beacons. Beacons are physical hardware devices that communicate with mobile apps and other mobile technologies to share data points like location on a micro-local scale. Mobile app developers use this to deliver hyper-contextual content to users based on location—something that has been rolled out in places like baseball stadiums and shopping malls.

Beacons could serve as a layer to improve tracking and safety within potential ski-tech wearables, pairing with the device’s GPS to improve accuracy. Existing ski software, like the Epic Mix app, links to your RFID-chipped ski pass to track the vertical feet traveled during your ski day. The problem with Epic Mix’s solution is that it only tracks from the bottom of each lift that you scan through during your day, resulting in an inaccurate read of what you’ve done. A beacon-linked solution would provide a more accurate read.

It’s rare that a market that’s this obvious and has an audience with a clear willingness-to-pay goes ignored. All it takes is one entrepreneur ready to drop in. 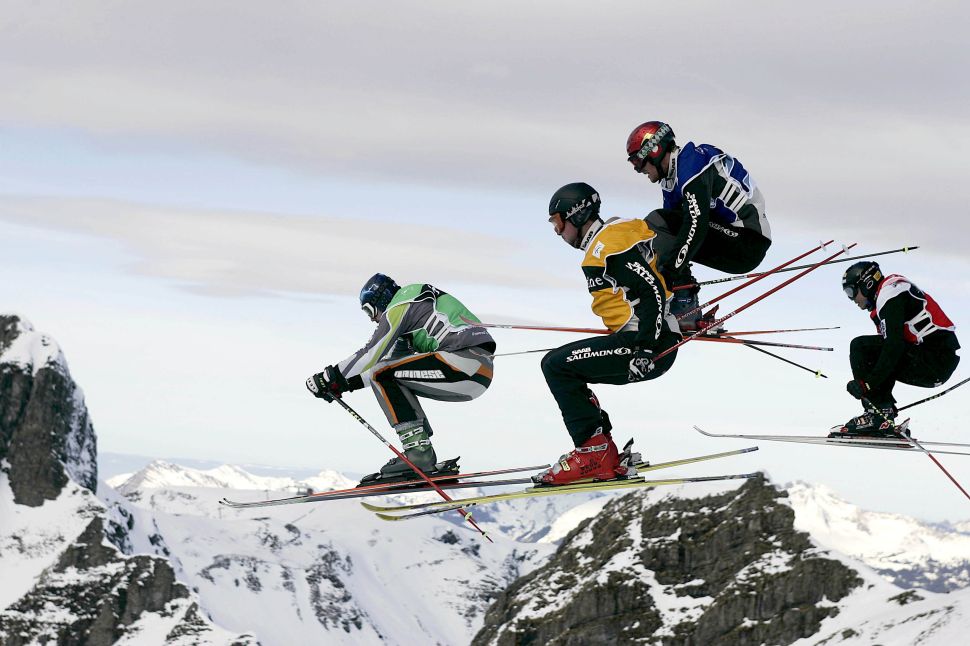