In the 1950’s, when there was barely an art market in New York City, young artists who were not served by that market looked to Manhattan south of 14th Street to show their work, and to sell it, if they could.

The galleries that they formed have been gone for half a century, if not more, but some of those artists—Alex Katz, Tom Wesselmann, Norman Lewis, Louise Bourgeois, Louise Nevelson, Red Grooms, John Chamberlain, Dan Flavin, Lucas Samaras, George Segal—remain highly relevant.  Many more are names that few outside those circles remember.

Grey Art Gallery at New York University has just opened a work of modern archaeology, “Inventing Downtown: Artist-Run Galleries in New York, 1952-1965.” The cover photograph of the show’s massive catalog gives you an idea of the spirit of those times. Red Grooms is pushing a baby carriage across Third Avenue with a huge canvas in it. He is wearing a coat that looks purchased from a gift shop. He is running to avoid traffic. The year is 1960.

“Inventing Downtown,” more about art than documentation, isn’t a time capsule, although its informative catalog certainly is. And it isn’t a prequel to the Pop Art, since so many of the artists on view either missed that train or weren’t allowed to board. And its notion of Downtown shows how that term shifted with time, fashion and the costs of renting space.

Yet the exhibition will be a discovery for those who might think that modern art began with Andy Warhol. All the more reason to visit, even if the artists haven’t all been Warhol-ized into celebrity.

Who remembers the sculptor Bill King? King’s ingenious sign for the artist-run and artist-founded Tanager Gallery at the show’s entry (Untitled, 1960) is a faded reddish airplane/bird in sheet metal, which could seem like a Dada-esque creature or a flying machine from the archives of Americana, the kind of whimsy that a shopkeeper might hang over his door. Around the corner, King’s wooden painted elongated figure, Man with a Checkered Jacket (1955), looks like a Giacometti sculpture for a Fourth of July party. Both objects come from the collection of Lois Dodd, another artist, who is represented by a 1958 painting, Cows – Red and Orange on Pink Ground. Artists tended to be the best, or the only buyers of other artists’ work. This meant that prices were low.

Across from Bill King’s Man, past Mary Frank’s dense wooden Reclining Figure (1960) is Alex Katz’s painting, Ada Ada, of his wife, times two, from 1959. Katz painted those blurry likenesses in 1959, when he was 32.

Philip Pearlstein, known for his nudes, is represented by Roman Ruin (1961), a softly painted vision of a building in the shades of a pinkish terra cotta, in graceful decay. It is curvaceous, but it’s not the Pearlstein that most of us thought we knew.

As I was looking at Ada Ada, who should emerge from the next gallery but Alex Katz, now approaching 90 and remarkably fit. “Everybody says it looks like Warhol,” Katz said of the portrait, which suggests Elizabeth Taylor to our post-Warhol eyes, “but he wasn’t doing anything like that until four years later.”

It wouldn’t be the only such case. Downstairs at Grey Gallery, Interior #2 by Tom Wesselmann is an installation (an unheard term at the time) or a sculpture in relief, of an urban kitchen, with a working clock (set at the right time), a fluorescent light, a bottle of soda, an operating fan, and a window painted to have a view of buildings outside. It’s a streamlined pre-Pop take on collage, a meditation on urban banality. Who knew?

During the years surveyed by “Inventing Downtown,” artists congregated according to their exclusion from proper art society, or their rejection of it, and by political engagement—all amply detailed in the show’s catalog, $60. African-American artists neglected by established galleries, including Romare Bearden and Norman Lewis, founded Spiral Group, which operated out of a space on Christopher Street in 1963. It took two years of discussion for those artists to organize their only exhibition in 1965. The current show includes a raw, austere abstraction by Lewis, which may be a jolt to those who only know his narrative work.

In 1960, the March Gallery on East Tenth Street became one of the more militant of the artist-run operations, under the guidance of Boris Lurie (1924- 2008), a Holocaust survivor and rebel among rebels who found too much careerism among Downtown artists. The names of shows that Lurie mounted, “The Vulgar Show” and “The Doom Show,” reflected his taste for political and transgressive work. An exhibition devoted to Lurie now on view at Westwood Gallery on the Bowery is rare chance to see this artist in depth.

Sometime you wonder, after seeing these early works, whether some artists made the right career choices. Wesselman’s installation, like Katz’s two-figured painting, is Pop Art before the term caught on, with industrial materials and plenty of clever flourishes like its non-stop fan and its draped curtains in metallic tones. Those of us who watched Wesselman produce his Great American Nudes for so many years would have liked to have seen more work in this vein of sculpture/relief. The same goes for Philip Pearlstein’s paintings of ancient ruins.

Eventually the galleries would disperse under pressure from high rents and even from the emergence of a market that could support some artists. Rebels went to teaching jobs, to studios outside New York, and some to early deaths from overdoses or too much booze. A few, like Katz, are still going strong.

Artists in later generations would found their own galleries, sometimes even in Manhattan, but the cost of space makes that rare. Somebody today may be transporting a cumbersome painting in a baby carriage, but it’s probably not on Third Avenue and 9th Street. The buildings in the background have gone through any number of owners. Now you can see the art that’s outlived more than a few landlords. And through April 1, it’s back in that landscape. 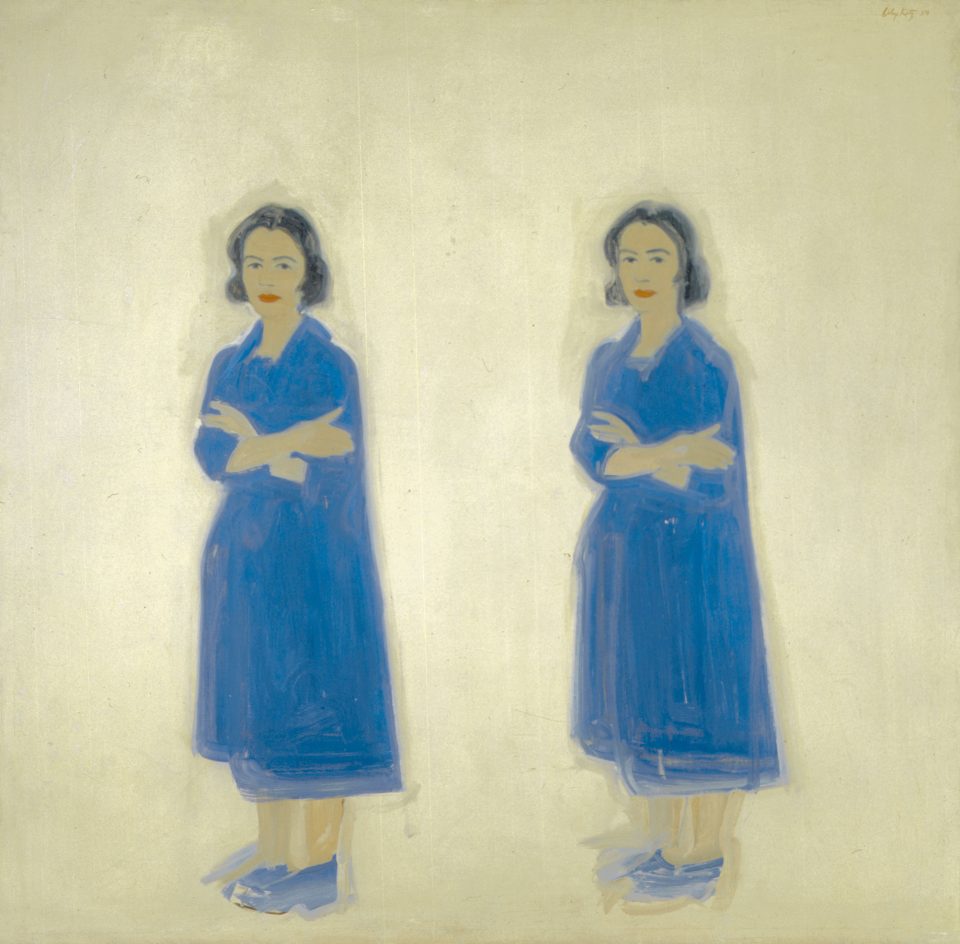