I saw the original Star Wars trilogy too late.

Although I vaguely recall seeing Attack of the Clones in theaters at age 9, up until my freshman year of college, my experience to the central canon Star Wars universe was limited to fuzzy, half-remembered recollections of the scene where Luke is hanging upside in an ice cave, and the scene where furry little ewoks party on a forest planet.

But my freshman year at Brown, I watched Episodes IV, V, and VI in succession (one of the many nerd-event afternoons that are an inevitable byproduct of the college experience). I had a few takeaways:

2) Lots of cheesy scene transitions. Did George Lucas cut this on iMovie?

4) Why do people think Boba Fett is so cool?

By virtue of living as a human being in of pop culture landscape for the last 24 years, I know about Boba Fett. Boba Fett is supposedly some massive badass, and a near-ubiquitous presence on people’s lists of favorite characters, despite his seemingly unwise fashion choice of wearing both a jetpack and a cape that looks flammable. He’s supposedly getting his own one-off origin story spin off. He is undeniably a major part of the Star Wars landscape. And yet, after watching the original trilogy, I was left wondering if everyone had watched the same movies I did.

In the three movies I saw, Boba Fett had cool armor, sure, but he mostly just stood next to Darth Vader while Darth Vader said all of the interesting lines and did all the actual fighting. In all of The Empire Stricks Back, Boba Fett has exactly four lines, which give him a grand total of 27 words. In Return of The Jedi, Boba Fett has no lines at all. He is basically a mannequin just hanging out at Jabba’s palace before he dies by way of a lame, hilarious pratfall into a sand vagina. It’s a death befitting someone who’s character name in the credits would be “Guard #4,” not someone who’s supposed to be a favorite character.

If it’s been a while, let me walk you through Boba Fett’s death (and don’t you dare say the words “extended universe,” for god’s sake): Boba Fett takes a full 40 seconds aiming his wrist rocket thing at Luke who’s fighting some guards a little ways off. Han Solo is standing right behind Boba Fett. Apparently unable to see the bounty hunter literally inches away from his body, Han Solo goes, “Boba Fett? Where?” and turns around while holding a giant paddle, inadvertently hitting Boba Fett’s jet pack, which turns it on, propelling the feared bounty hunter into a wall, from which he tumbles into the Sarlacc Pitt.

The “not seeing someone, spinning around, and hitting them with a long object you’re holding” is a classic Three Stooges-style gag. Add in Boba Fett’s Wilhelm scream as he soars, attached to his malfunctioning jet pack, and the scene could accurately be characterized as slapstick. I re-watched it on YouTube and needed my co-worker Vinnie’s confirmation that the lines “Boba Fett? Where?” and Boba Fett’s incongruous scream weren’t just added by someone to make the YouTube video funnier.

So how did someone who does so little and dies so pathetically capture the cultural imagination? The answer, like most answers related to Star Wars, is toys.

Empire Strikes Back premiered in theaters in 1980. But in 1979, you could send away for a new toy from Kenner that was slated to have a major role in the movie, a bounty hunter named Boba Fett who had been briefly introduced in an animated sequence in the 1978 Star Wars Holiday Special.

The toy had Boba Fett’s now-iconic armor: a green metallic vest that looks worn from years of bounty hunting, a gun, a red-striped helmet, and a jet pack with a rocket launcher (though the rockets were supposed to actually launch, although safety concerns meant the vast majority of them were shipped with the tiny plastic bit permanently glued in).

“You had to send in proof-of-purchase signs cut off the boxes of other [Star Wars] toys,” recalled author Andrew Ervin. “If you mailed those in, and maybe some money too, you could get the Boba Fett toy.”

In a pre-viral-marketing-campaign era, the Boba Fett action figure generated speculation and anticipation.

“Part of it was the mystery,” said Dave Lartigue, who was 11 in 1979 when the figure was released. “He was in this cool-looking armor and we knew nothing about him, except he was a “bounty hunter” (which was cool sounding.) His figure also looks very different from the others at that time, with a lot of interesting color and detail.”

“There was a mysteriousness to the character that was tough to define back then,” said Ervin.

Even in the films, the distinction of Boba Fett emerged more from what was implied about him than what was actually depicted.

Boba Fett’s first trilogy appearance comes in Empire Strikes Back as Darth Vader speaks to an assembled row of bounty hunters, enlisting their help in tracking the Millennium Falcon. Vader stops in front of Boba Fett. “No disintegration,” he warns. The implication is that this bounty hunter is more reckless and more dangerous than the others—like our favorite hero Han Solo, who shot Greedo at the Mos Eisley Catina, he’s quick with his trigger finger.

“Even when he finally appears in [Empire Strikes Back], he’s cool and mysterious,” Lartigue said. “He talks shit to Vader and gets away with it. He outsmarts Han. He really seems like a capable, dangerous enemy. And we still learn little about him.”

It would be another three years until another Star Wars movie would be released, three years during which fans were had only their imaginations to build a mythos around Boba Fett, the character who seemed prominent, but about whom so little was known.

“He was a part of the universe that we didn’t know, so we were free to create our own background. I believed he was Han Solo’s lost twin brother in my stories,” said Lartigue.

Of course, no one could have known that in Return of the Jedi, Boba Fett would only appear to die like a chump before saying a single line. But the mythology around his character was already written: here was someone new and interesting, even if you had to make up exactly what about him was the interesting part. Here was a character that, if nothing else, existed outside the Jedis = Good, Empire = Bad archetypes of the often-infantile Star Wars morality. “Boba Fett wasn’t a good guy or a bad guy,” said Ervin. “He was different—and that was super exciting for a kid then.”

In many ways, Boba Fett is the opposite side of the Han Solo coin—a selfish mercenary, yes, but one who goes unredeemed, whose face remains hidden behind a mask that every child could imagine his or her own face behind.

If you watch Star Wars as an adult, a lot of it seems kind of dumb. You could spend days teasing out plot holes and pointing out silly inconsistencies (don’t try to do this on Twitter, lest the obsessive fans descend), the dialogue is often laughable, and the prequels seem designed for mockery. But Star Wars is cool the exact same way Boba Fett is cool. It’s not in the details or the dialogue—it’s the aesthetic, what’s implied in the world beyond what’s shown, and it’s the nostalgic memories of the stories built by kids playing with toys, imagining themselves as jedi or rebels or bounty hunters. 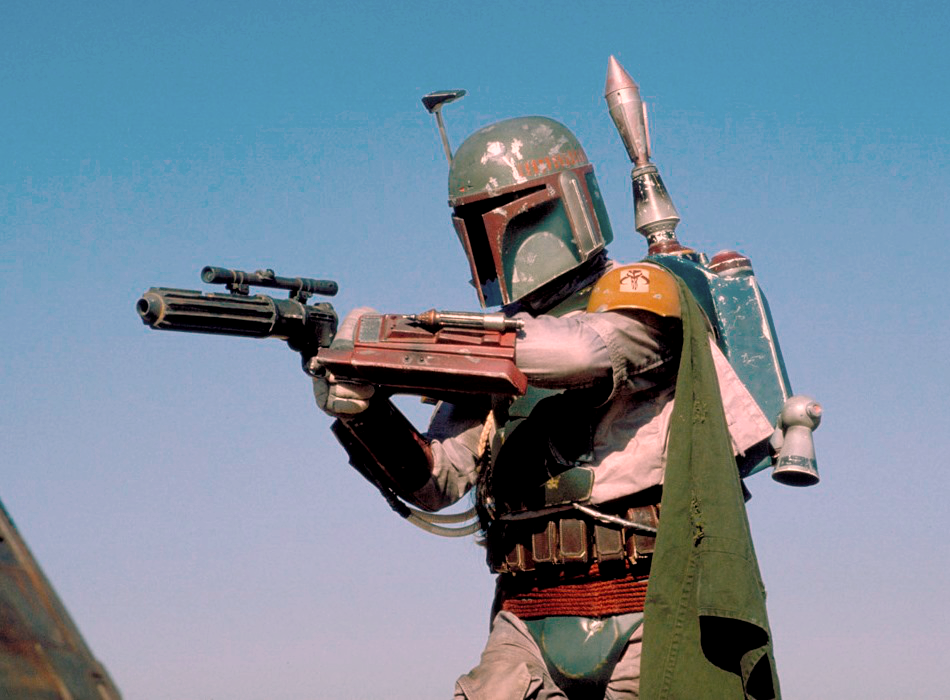