The manufactured outcry against President Donald Trump’s nomination of Sen. Jeff Sessions as Attorney General has been nothing short of extraordinary. Sessions not only has a wealth of experience as a prosecutor, but has served well and with dignity in the United States Senate for 20 years. Yet, to hear Democrats tell it, this Sunday-school teaching Alabama gentleman who helped get the death penalty for a Ku Klux Klan murderer is really a racist in disguise.

To understand why Democrats are having fits of apoplexy over the nomination of Senator Sessions, one first must understand a bit of history and the more recent consolidation of power and abuses within our Department of Justice in the last 15 years. As Alex Kozinski reminded us in the foreword of my book, Licensed to Lie, the prosecutor has the unlimited resources of the Sovereign and controls the investigation. More than 80 years ago, the Supreme Court and an Attorney General of great integrity made plain that a prosecutor’s job is to seek Justice—not convictions. In the interest of the United States, “a criminal prosecution is not that it shall win a case, but that justice shall be done.”

Fast-forward to the heinous attacks of 9/11, the collapse of the corporate titan Enron, a financial tsunami, disgraced Attorney General Alberto Gonzales, and then the reign of Eric Holder. Holder began his term with wide acclaim by dismissing the indictment of Alaska Sen. Ted Stevens. The Bush Administration’s prosecution of Alaska’s beloved Senator—ramrodded and micromanaged by then Acting Assistant Attorney General for the Criminal Division of the Department of Justice, Matthew Friedrich—was itself completely corrupted by prosecutors of the ironically named “Public Integrity Section” who hid evidence and lied to the court and jury. The jury’s verdict of guilty was based on the prosecutors’ false narrative while they hid evidence that supported the defense and destroyed their key witness, and it gave the Democrats that coveted 60th seat in the Senate.

After Stevens lost the election by only a few thousand votes, a young FBI Agent broke ranks and revealed assorted prosecutorial misconduct. Noted federal District Judge Emmet G. Sullivan blew a fuse. It was obvious that Judge Sullivan was going to dismiss the indictment, so Holder had no choice. He took full political advantage of the situation—dismissing the indictment before Judge Sullivan did so. Holder proudly proclaimed that he would “clean up” the Department of Justice in the wake of the Stevens’ travesty. Instead, he quietly turned DOJ into a weapon for achieving and even funding President Obama’s political and social agenda.

Holder protected the corrupt prosecutors who broke rules of law and ethics. Then, he broke them himself. Remember Fast and Furious? The stash of weapons given and promptly lost to drug dealers in Mexico, then found at the murder of a United States border patrol agent? Eric Holder became the first Attorney General held in contempt of Congress for his refusal to produce documents for the congressional investigation into Fast and Furious. In addition, he quickly sought to redefine the Freedom of Information Act to include no information that the administration did not want disclosed, helping Obama preside over the least transparent administration in history.

Did you know about Operation Chokepoint—the Department’s extortion racket in which it and its strong-arm, the FDIC, pressured the banks to shut down accounts of lawful businesses—just because Obama didn’t like them? Countless mom-and-pop businesses—even constitutionally protected ones such as gun and ammunition suppliers—found their access to basic banking services disappear. This plainly illegal operation by the “Justice Department” became the focus of legislation by Congress, but it continued.

What about our immigration laws? Long ago now, President Obama, with the cooperation and consent of what law professor Bill Hodes calls “the now ironically named Department of Justice,” ordered our border patrol and ICE officers to stop enforcing our immigration laws. Adding insult to injury, Obama made deals with terrorists, swapped or simply released prisoners from Guantanamo, and secretly sent $1.7 billion in untraceable cash to Iranian thugs in the middle of the night—each with a “wave” to Congress that was three fingers and a thumb shy of friendly.

Did you know that under Holder and Lynch, the Department of Justice has been “redistributing the wealth” so to speak?  They devised a system to extort enormous fines from the banks upon threat of racial discrimination suits which are settled by payments directly from the bank to Obama’s favorite activist groups which also require their individual recipients to register to vote. Fundraising extraordinaire.

Attorney General Lynch built on this lawless legacy. She secretly signed an order authorizing the NSA, which has collected emails, messages, and cell phone data from law-abiding Americans for years, to share that information with other federal agencies. She did this despite Congress and the Fourth Amendment to the Constitution which expressly forbids such warrantless general sharing in an effort to protect the freedom and privacy of law-abiding citizens.

The Department of Justice is the nation’s law enforcement arm. It decides who, what, if, and when to prosecute—civilly or criminally. All the federal law enforcement agencies essentially fall under it and rely on DOJ for enforcement. It should do so fairly and equally, without regard to color, religion, gender, politics, or class. There should be no free passes to anyone because they support the President’s agenda. If anyone is prosecuted for tax evasion, others known to have committed the same crime should be also. The same is true for voter intimidation, financial crimes, and everything else that is really a crime. What’s sauce for the goose is sauce for the gander.

Moreover, with more crimes on the books than anyone can count, we don’t need to be making up any new ways to prosecute people for political or personal gain, as did the prosecutors in my book. They, on behalf of the Bush Administration, destroyed Arthur Andersen LLP—a venerable accounting firm with 85,000 jobs—only to be reversed years too late by a unanimous Supreme Court in a blistering decision expressing shock over the lack of criminal intent. And while Obama recently commuted the sentences of a traitor and a terrorist, numerous drug dealers (who also used guns), and violent criminals, formerly productive and tax-paying Brad Stinn has served seven years in prison with five more to go, having been convicted on the prosecutors’ novel theory that receiving his salary and a bonus was fraudulent.

This is why “progressives” are going berserk over the thought of Senator Sessions taking the helm of the Department of Justice. Progressives have lost their primary tool of intimidation, social policy enforcement, and the huge piggy bank for funding their pet projects. Now their illegal tactics will come to a screeching halt. There will be no more passes to people from either political party who have committed real crimes; no more edicts from on high that usurp the role of Congress; no more contrived crimes; no more favoritism or double standards of accountability. Jeff Sessions is the prosecutor of whom Robert H. Jackson spoke, and he will restore integrity and the Rule of Law to the Department of Justice. We, the people, will insist on it.

Finally, the new boss will NOT be the same as the old boss.

Sidney Powell worked in the Department of Justice for 10 years, in three federal districts under nine United States Attorneys from both political parties. She was lead counsel in more than 500 federal appeals. She is the author of Licensed to Lie: Exposing Corruption in the Department of Justice—a legal thriller that tells the inside story of high-profile prosecutions. 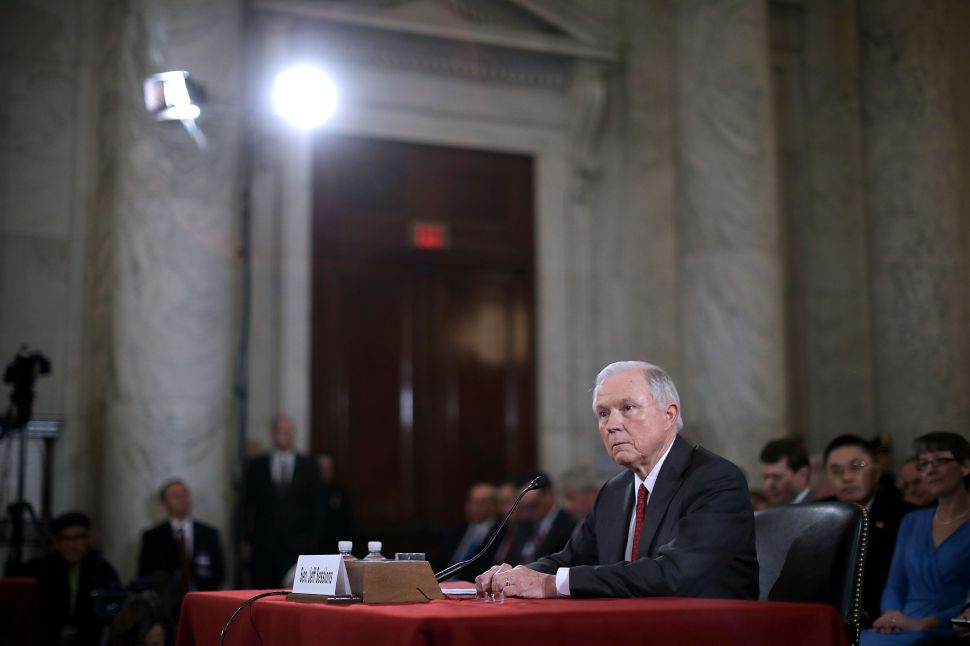