Tens of thousands of people, including many pregnant women, in the United States and its territories have been afflicted with Zika virus in recent months. And despite some promising research, the public health community is still struggling to find a cure or develop a vaccine.

But what if the key to stopping the spread of Zika is combining medical science with wearable tech?

That’s the idea behind BugBling, a mosquito-repelling bracelet, which has been shown in preliminary studies to reduce the frequency of mosquito bites by 95 percent.

BugBling is the brainchild of Robert Hockaday, the president of Energy Related Devices, a New Mexico-based research and development firm mainly focused on alternative energy sources—his other projects include a more efficient solar panel that lasts twice as long as traditional models.

While BugBling may seem perfectly timed to address the recent Zika outbreak, it’s actually been in development for almost a decade. Hockaday noticed that “most mosquito repellents are gooey and they sting,” so his invention emulated fuel-cell technology, storing and distributing mosquito repellent as a vapor. “With a vapor,” he explained, “you get all the benefits without it actually being on your skin.”

BugBling’s repelling vapor, a combination of citronella, lemon eucalyptus and DEET, is stored in a silicone rubber membrane, which stabilizes it and acts as a reservoir. Once the wearer activates the plastic wristband (which come in various colors), they are enveloped in “an armor of odor” which will fend off mosquitoes for up to 800 hours (that’s 33 days), promises the company’s website.

Since the wearer controls BugBling, they can also turn off the device once they’ve left a mosquito-heavy environment, and then store it in a resealable pouch.

Hockaday said the “most critical market” for BugBling is pregnant women, whose fetuses can suffer from microcephaly, a sometimes-deadly birth defect that can stymie brain development of fetuses and infants.

Tests conducted in the labs at New Mexico State University found that BugBling is effective 95 percent of the time, while emitting only one-thousandth the chemicals of traditional repellents (though many experts agree DEET is not harmful to pregnant women).

“BugBling…proved to be superior compared to the other devices we tested,” Immo Hansen, an associate professor of biology at NMSU, reported last January.

“The real world’s a little more chaotic, so we’ve tested how people use it in outside situations.” – Robert Hockaday

Some in the scientific community expressed doubts about the product. Peter Armbruster, a professor of biology at Georgetown University, told the Observer that the BugBling, in his opinion, promoted comfort over efficacy, making it a less effective Zika-fighting tool. “Just because something is desirable to use doesn’t make it efficacious,” he said.

Armbruster also said that for a product like BugBling, trials in buggy environments prove more valuable than lab experiments: “Showing aversion to an odor is very different from demonstrating effective repellency under natural conditions,” he said.

According to Hockaday, however, the BugBling does both. He said that he believes in both field tests and laboratory tests—in fact, when the Observer spoke with him he was in Hawaii preparing the latest BugBling field experiment.

“The real world’s a little more chaotic, so we’ve tested how people use it in outside situations,” Hockaday said.

Every one of the outdoor experiments has affirmed the 95 percent figure, according to Hockaday.

Each BugBling is currently assembled by hand, though Hockaday said the wearable could also be mass produced. He and his team are still determining the device’s retail price.

Hockaday has made thousands of BugBling prototypes, which are now under review by the Environmental Protection Agency to ensure the bracelets meet regulatory standards. He hopes to have the device approved for use by the end of 2017.

“It makes you less attractive,” Hockaday said, pausing for effect. “To mosquitoes.” 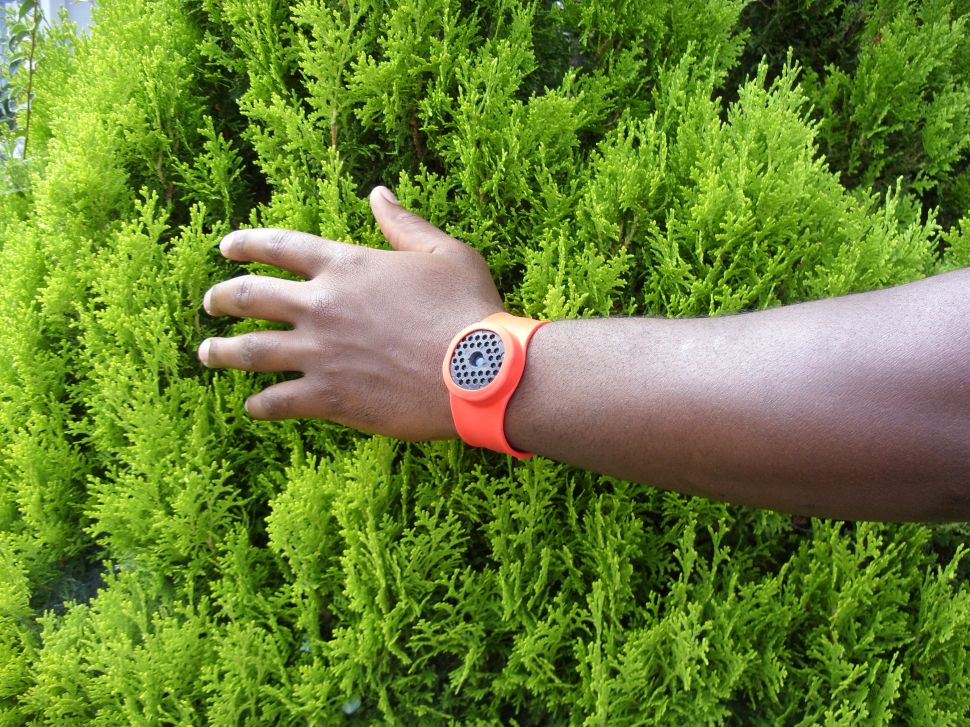