Every episode of The Young Pope feels a little bit like waking from a dream: The details are clear but inexplicable. When you try to explain what happened to a third party, you sound rambling and insane: “There was a kangaroo, and that one guy had mole, and the redheaded priest was having an orgy with Honduran people, and, and…” The actual content of the episode fades, slipping through your fingers like the bulk of a dream dissolving from your brain the moment you rise to brush your teeth. What is real? What parts of the episodes mattered? Does any of it matter?

No. Of course not. This is a television show about Jude Law being a Machiavellian pope and it opened with a shot of him crawling out from under a pile of naked babies. This television show is bananas. I’m never actually sure what’s going on, and it’s my favorite television show.

Here are all of my half-remembered favorite things in this glorious, beautiful disaster. I have no idea what episode these are from, or if they even actually happened (spoiler alert: they did). The Young Pope is a series of discrete fever dream hallucinations.

That one guy’s mole that always looks like it’s about to slip off his face. Why is this a thing they decided to put on his head? It’s not a real mole. What does it meaaaaan?

Young Pope insisting on only drinking Cherry Coke Zero like a motherfucking diva.

Young Pope getting mad at this nun for crying when her sister died.

Young Pope releasing a kangaroo in the Papal gardens and testing his Force powers by trying to make it jump on command.

The guy named Edgar who died at breakfast.

When the Young Pope rang his secret desk bell and this guy came in and told him it was time for a snack.

Redheaded Friend and Young Pope going to a hotel to buy cigarettes and wearing matching tracksuits and then chatting with a prostitute briefly.

When the Young Pope dropped a baby on its head.

When the Young Pope and a bunch of priests chilled out like a bunch of creepers in full Papal regalia, in the home of that sacrilege stigmata farmer. They presumably crawled in through a window.

When Mole Priest was going to kiss Young Pope’s feet and Young Pope physically pulled him down to kiss his foot using his other foot.

That nun who was just super good at soccer. 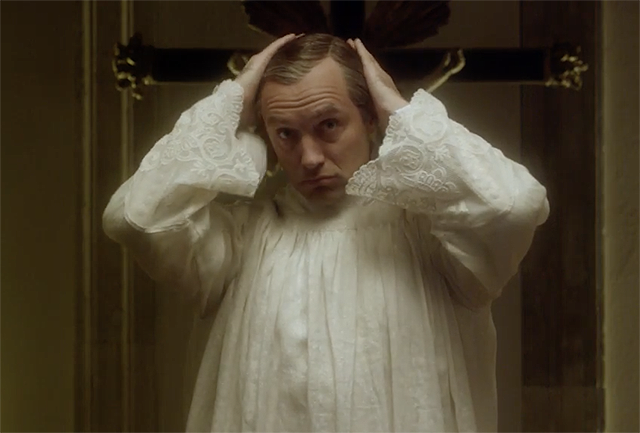