(Previously on A Millennial Reviews.)

“To me, that which is generally called the ultimate aim of socialism is nothing” – Eduard Bernstein

I’m a leftist now. I joined the DSA, I listen to Chapo Trap House, I’ve got one of those sideways berets; the whole Loot Crate. I should add that I don’t understand any of it. I spent the entire election process posting anti-Trump Disney Princess memes in reaction to his fascist treatment of Mexicans while completely ignoring the fact that Walt Disney was a Nazi-sympathizing union buster whose company recently tried to patent the phrase “Day of the Dead” in order to sell toys. I switched from Uber to Lyft even though they’re basically the same company. I’m calling my senator and leaving garbled voicemails through my Black Bloc mask. I’m definitely not making things worse by making a cheap fad out of an actual resistance. Anyways none of that matters because I’m here, and I’m ready to fight against the president who won the election because I didn’t mail an absentee ballot back to Wisconsin because Maynard James Keenan told me that Bill Hicks told him that George Carlin told him that not voting is a form of protest. I’m here, and I have a Hulu password if anyone in the resistance needs to use it.

Sharing your Hulu password is good socialism. The Sandinistas actually all shared one Hulu password. FSLN was their password, which they used to watch I Love Lucy. Guys, I’m learning a lot. Anyways, I’ve been on Twitter every waking hour of the day lately because that’s where all the smartest memes come from and I have to say my favorite smart Twitter accounts are probably these “Modern Seinfeld” accounts. They’re great because they talk about things that I like, like Spotify and wifi connectivity. I was watching Hulu recently and I discovered something kind of surprising. They made a Hulu series out of those accounts. I guess it’s pretty cool to see someone’s hard work pay off, like the Shit My Dad Says guy getting a book, or Miranda Sings getting to headline a bunch of comedy clubs and then getting a Netflix show. Anyways I watched it and unless I’m missing something, it’s a weird Twitter send-up of the New York Clintonian bourgeois upper class of the 1990s.

First of all, it’s set in the 90’s which is clever because Seinfeld from Twitter is set in current times, so this is a really clever joke where they take this modern thing and ask the question “what if these characters existed in a past world where everything was analog?” So the plots of these characters’ mishaps center around clunky voicemail machines, newspaper delivery men, the buying and selling of vinyl records, and trying to catch things on antenna television. Really the show should be called Past Seinfeld orUnModern Seinfeld so people understand what they’re watching. Regardless, the real subtext of Seinfeld is in its four protagonists’ treatment of virtually all marginalized people. Jerry Seinfeld, who lays about as an artist throughout the series, finds his arch nemesis in a U.S. Postal worker named Newman. Newman clearly represents unionized workers and is seen by Jerry as fat, slovenly, lazy, eccentric, and untrustworthy, when in reality he is living the life of the exploited. Newman works endless hours while needing to devise entrepreneurial side hustles with Kramer just to survive in Giuliani’s New York. Newman is all of us.

Jerry’s dating life consists of a revolving door of physically perfect women whom he beds before casting aside over various superficial imperfections. Perhaps people have man hands because we’ve worked a day in our life. Rosie the Riveter had man hands. Jerry cares not. Jerry surrounds himself with failsons like George Costanza and opportunists like Elaine Benes yet holds women to an impossible standard of not being a “low talker” or a phone sex worker, or someone who laughs like Elmer Fudd or has jimmy legs. Women in Seinfeld are treated as disposable and renewable sex objects for our upper-class protagonists. Costanza burns down a woman’s cabin. Even Elaine finds herself complicit in a plot to discover whether a woman’s breasts are real and thus of higher value. Don’t let the bastards grind you down.

Characters of color are rarely seen on camera, if only for brief moments to snap their fingers and scold our central four heroes before zipping off screen. In an act all too prescient of the modern centrist left, Jerry attempts to sum up the totality of race relations in America by symbolically eating a black and white cookie, all the while his actual throughout the show lead to humanitarian crimes such as the deportation of Pakistanis. Elaine’s pro-life pageantry in Poppy’s restaurant covers for her private attempts to convert a gay man’s sexuality for her own interests. Kramer courts our love of celebrity, posing for Calvin Klein, wearing trendy tight jeans, acting, hosting The Merv Griffin Show, but behind closed doors, he’s causing Puerto Rican Day Parade riots and running Kramerica Industries into the ground. All too familiar are the smiling face and murderous bloody hand of the American government.

Seinfeld ends with our anti-heroes going to prison but that’s where the line between fiction and reality severs. It’s much like the new season of Homeland, where Donald Trump isn’t president. I like to hope that we can learn from Seinfeld’s backward logic, from the folly of its players. When these pretzels make us thirsty, we should not eat more pretzels. You can turn down a Junior Mint. If it feels as hot as a sauna you may actually be in a sauna. You can spare a square for your brothers and sisters. You have a square to spare. A George divided against itself cannot stand. Participation is no longer optional, you have to wear the ribbon. No soup for you. Soup for all. 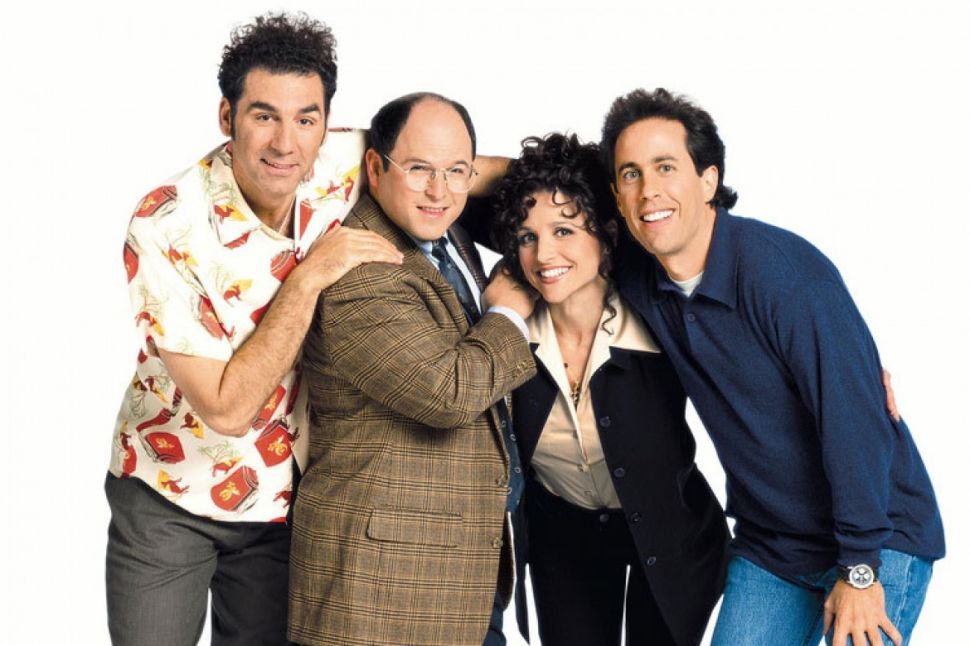