For Paulina Davis, vice chairwoman of the New York chapter of the National Women’s Liberation and a member of the group’s Women of Color Caucus, participating in the Women’s March in New York City during Inauguration Weekend wasn’t anything new or unusual—she’s had the seeds of activism brewing in her since her young days growing up in a black, female-led household in Queens.

“I remember hearing stories at a young age of my mom and my aunt going to hear Malcolm X speak at the mosque in Corona, Queens, which is where I grew up,” Davis said. “So I grew up hearing stories about activism and I guess when I got to college…I wanted to go on and have a career where I could be fighting for civil rights.”

And she continued to pursue her passion for activism when she started college at the University of Delaware. There, she got involved with the Black Student Union. Very early on life, she said, she had a “sense of race consciousness” and understood that there were particular injustices that black people and people of color in general face.

But as Davis got older, she became more aware that she faced challenges not only as a black individual but also as a woman. When she hit her late 20s, she started to engage in more gender-related activism. And in the winter of 2015, her friend and colleague introduced her to the National Women’s Liberation, a feminist group for women combatting male cultural dominance and seeking more freedoms for women.

Ready to take action beyond discussing the issues with her friends, Davis attended a meeting of the group’s Women of Color Caucus. That day, the caucus was having a “consciousness-raising” session. She said that it felt good to be in a room with women of all backgrounds—including black, Latina and Asian American—and spanning a variety of age groups.

In July 2015, she went to her second meeting, the group’s general meeting, and she once again felt a sense of solidarity with the women sharing their experiences and the reasons that motivated them to participate—and has been involved with the group since. Her first activity with the group centered on a beach body campaign ad in Union Square that they believed shamed women over their appearance.

“It was clear that this was a group of people who had been organizing for a long time and that study was included in their way of organizing,” she said.

To protest Trump’s history of demeaning women who question or denounce him and casually conversing about his practice of sexual assault, the group got more than 7,000 women to pledge to boycott unpaid and paid labor for two days starting on Inauguration Day. Among the strike’s demands include putting an end to racist and sexist assaults, paid family leave for a minimum of six months, a new national health care system, a $15 minimum wage, free childcare and unfettered and de-stigmatized access to family planning services.

Davis said that she brought her mother, her aunt, her sister and her friends from out of town “who aren’t necessarily politically active,” and was happy to share the moment with them. She witnessed men and women alike disrupting traffic, recalled how the march route fell apart at one point “because no one was going anywhere.” People headed to Trump Tower.

As far as next steps, Davis said the group is looking forward to supporting and engaging with other groups. They received an invitation to speak at a #ResistTrumpTuesdays event last week that the Working Families Party and the Democratic Socialists of America organized, and they are planning to do an event with them in the future.

“There are some people who I believe are affiliated with the Women’s March whom we’ve been in contact with about potential future events,” she said. “We’re definitely trying to keep the momentum. We experienced a huge influx in interest after the election, and so we were a small group, and now we’re growing, and we’re excited about that.” 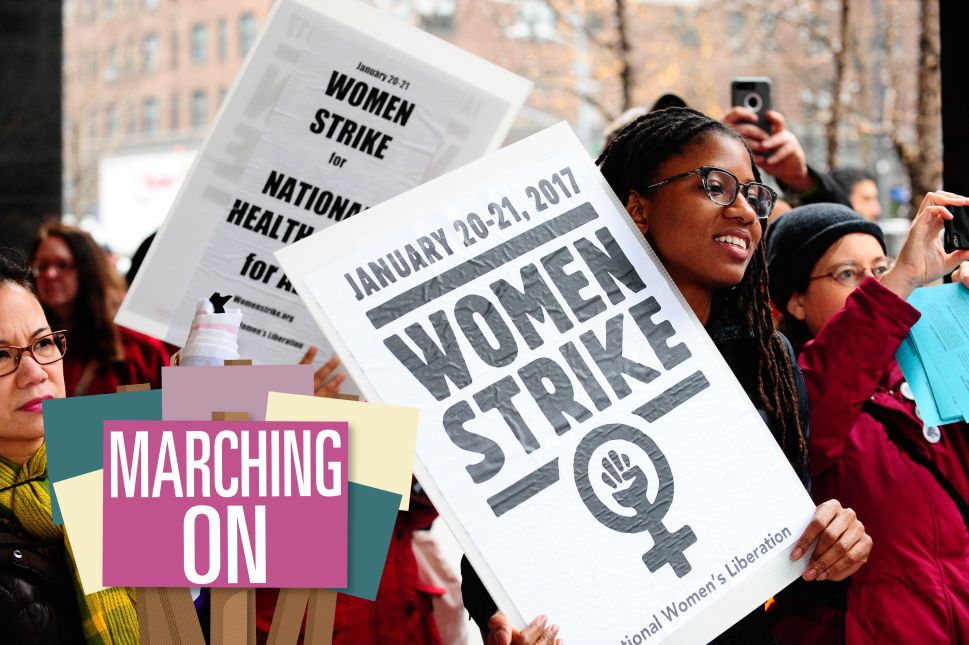