It was a big day for Marvel fans yesterday. Early (positive) reviews of FX’s Legion are starting to come out, the first official trailer for Netflix’s Iron Fist premiered and of course, Agents of S.H.I.E.L.D.! There are some great twists and turns in the episode “Boom,” but overall we are still waiting on a greater threat to occur. Yes the Russians, Watchdogs, and Nadeer are all working together to wipe out the Inhumans but they really don’t have a plan beyond hoping they accidently stumble upon an Inhuman. May is still kidnapped but we’ve been reassured several times that Radcliffe won’t kill her so we don’t have to worry much there. And although the season is about LMDs, we still really haven’t seen them rebel yet. Hopefully some danger is just a couple episodes away because compared to the first half of the season with Ghost Rider, the LMD storyline has chosen to build suspense and take its time acting on it.

The episode starts with Coulson and Mack in Spain doing some surveillance. They are following someone they believe can help lead them to May. That someone turns out to be Aida – Or Agnes Kitsworth as she is actually known. See, Fitz realized that Radcliffe probably didn’t invent Aida out of thin air but had to have modeled her off of someone. So they tracked her down to Spain where Coulson and Mack confront her. Agnes and Radcliffe have some romantic history and seems Radcliffe couldn’t deal with the failure of not being able to cure Agnes’ brain tumor and left her. Just in case you needed more of a reason to think Radcliffe is a dick. Coulson begs for her help but she wants nothing to do with this and wants to live out her remaining days in peace. Coulson thinks about arresting Agnes but Mack is there to tell him how irrational he is being because of May. I do want to point out Mallory Jansen’s acting as Agnes who seems so much more human than Aida and really makes her performance as a robot that much more incredible.

Now as for May, she is still hooked up to the Framework machine and it seems as if Aida has created a replica of the world so May won’t find any digital boundaries. Radcliffe is still with the Watchdogs and The Superior, both of which continue to not trust Aida. Also Anton decided to read the Darkhold, which can’t be good. But all it told him was that the key to ending the Inhumans was Radcliffe so it looks like they’ll be holding onto him for a while. Now I had mentioned earlier their lack of a plan, and well they still haven’t figured out much of one. Anton wants Coulson and S.H.I.E.L.D. and they think the only way they can get to them is if they use an Inhuman as bait. Radcliffe just so happens to have some Terrigen crystals he took from Hive last season. They’re hoping that they will be able to find someone with the Inhuman gene to use them on and they may just have an idea of where to start.

The agents are still in damage control from last episode. Jemma is testing Mace and finds out the super soldier serum could actually kill him just as Fitz comes in with a new suit for Mace that injects the serum without having to carry around dumb suitcases. It’s a shame he’s told not to use it because it’s a pretty nice suit. But not having powers is getting to Mace. He doesn’t feel like he’s contributing anything and those feelings continue later into the episode. Daisy is relocating Inhumans now that the Watchdogs have access to the Darkhold. I may have gotten a little excited when she mentioned sending one Inhuman to Calgary being a fellow Canadian.

Now I truly wasn’t expecting what happens next and it is refreshing to be surprised. As I mentioned, the Watchdogs had a plan to lure S.H.I.E.L.D. out by finding a new Inhuman and they decide to go see Senator Nadeer. She’s busy telling her staff to cause a media storm about Inhumans being moved around the world and hiding in people’s backyards (a lot of political parallels going on here) and then the Watchdogs leader, Terrence Shockley – who we have seen before, shows up and believes that if Nadeer’s brother was an Inhuman, she could be too. He smashes the Terrigen crystal and the gas goes everywhere and it’s not Nadeer who changes, but Shockley. Shockley turns into a cocoon and as Nadeer is cursing him out, an explosion occurs. Daisy thinks it was a false flag operation until the news reports that Nadeer is dead. One less threat I guess? Fitz and Simmons investigate the remains of the office after the explosion and realize that there is nothing there to trace but they do have video of Shockley entering the office and believe that the Watchdogs could have used the Darkhold to make untraceable bombs. Sure, why not.

Shockley shows up to the Watchdogs hideout in a pretty rough shape. The Superior threatens him and demands to know what happened and Shockley lies and says that it was Nadeer who turned into a husk and then caused the explosion. The Superior is going to leave the country because of how big this mess has gotten but Shockley says he still is committed to the plan. Although not long after, S.H.I.E.L.D. bursts into the hideout and captures Shockley. They have him locked up on the Quinjet and Daisy is trying to interrogate him but he only wants to talk to Mace. While Mace is on his way, Fitz and Simmons are still examining the explosion and realize that there are remains of Inhuman terragenesis and that if Shockley was the only one to escape, it was him that caused the explosion. Well duh. They run out and see him charging up next to Mace and the agents manage to toss him into the Inhuman containment container and drop him out of the jet just as he explodes. So Shockley can turn his molecules into an atomic state and explode whenever he wants. Not only that, but he can reform after, which he does in the middle of a desert. But keep in mind, he does destroy his clothes in the process so we are going to get a lot of naked Shockley.

Coulson does follow Agnes back to her place, but he goes to apologize and tell Agnes about how Radcliffe has May. This much nicer approach works and she agrees to help them. Agnes sends an email to Radcliffe and Aida can tell something’s up. Radcliffe tells her about Agnes and how she was modeled after her and there’s something about the way Aida responds that shows she is hurt to not be unique. Agnes is waiting for Radcliffe to show up but instead he sends a phone to talk to her. They argue about their past but Radcliffe wins her over by saying he has found a way to cure her. She decides to leave with him and leave Coulson and Mack without any leads.

The agents need to go after Shockley and The Superior realizes that they finally have the bait they need to lure S.H.I.E.L.D. out.  Shockley blows up a motel (and the dad from Even Stevens I believe) to get S.H.I.E.L.D.’s attention. They are on their way and they hope they can use Daisy’s powers to defuse Shockley. They meet on an open stretch of road and Daisy does the opposite and continues to blow Shockley up to try and exhaust him. Anton shows up with reinforcements to take on S.H.I.E.L.D. and Mace finally gets a chance to be a hero as he injects himself with the super soldier serum and runs head on at The Superior’s oncoming vehicles. I wish it was a cooler scene but he is taken down rather fast. But he does give Fitz and Simmons enough time to drive through post-explosion Shockley and suck him up with some sort of molecular vacuum. Sure, why not.

The episode ends with Agnes getting put into the Framework and seeming happy and content but her body dies in the process. Radcliffe explains that her consciousness will live forever in the Framework and I can’t tell if that’s nice or creepy but I feel like if I have to ask it’s definitely creepy. Also Aida steals Agnes’ necklace, which can’t be good. And Coulson as disheartened as he is, does tell Mack that he is hopeful as Radcliffe did mention he had another test subject in the Framework and he knows that has to be May. Will Coulson finally find her and get a kiss that isn’t from a robot? Find out next week, True Believers! 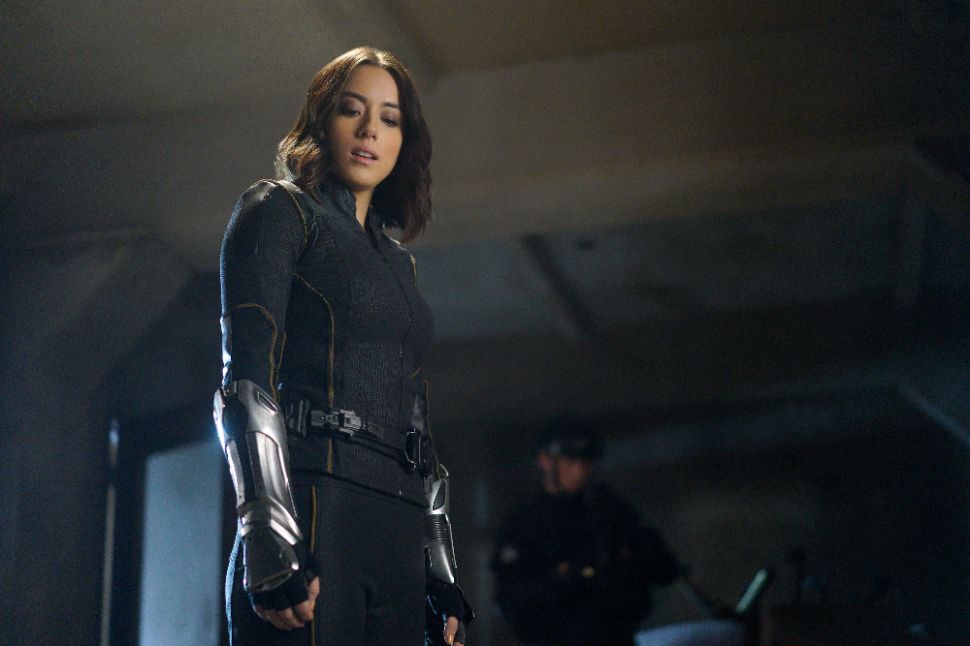