Love is in the air this week and I know what you all will love: New Marvel’s Agents of S.H.I.E.L.D.! But besides coming out on Valentine’s Day, there really isn’t much love to be found in this episode. It does have flashbacks! So that’s something. So hopefully you got to watch the episode “The Man Behind The Shield” with a special someone or someones (look at you go) but if you didn’t, you’re stuck with me I guess.

Coulson and Daisy kick off the episode with some kicks of their own (see what I did there?) and we finally get to see some of Coulson’s sweet moves. The two of them are actually in a miniature version of the Framework May is currently residing in. The original Framework was meant to be a virtual space to train agents but now we know Radcliffe has taken it all in a new direction. Fitz is going to try and track the source code to try and pinpoint where the Framework could be operating out of and while he does that, the other agents are tracking Director Mace after he was taken in the last episode. His signal shows up in Alaska but they only find his suit when they show up. There are also a bunch of photos of Coulson and it’s like stalker level.

The Superior is in a warehouse elsewhere preparing for something most likely evil and he’s getting impatient with Radcliffe as they near the final stages of their plan. Radcliffe is spending too much time in the Framework and Anton even tries to forcefully remove him from the machine forcing Aida to stop him. Those two are definitely still not seeing eye to eye. Mace is locked up beneath them and not doing so hot. He’s beaten, bruised, and sweaty and is panting like he’s in a Fifty Shades of Grey sequel. He uses whatever strength he has left to break out his chains and escapes his cell only to be confronted by Anton who still just wants to fight him and prove himself. Honestly, for all of the build up that went into introducing the Superior, Anton is kind of a dud of a character that is nothing more than someone that just wants to show he’s better in a world that is constantly advancing. Maybe that’s the point? He’s lo-tech in a hi-tech world. Vinyl vs. MP3. Any way you put it, he’s boring. He does fight Mace and takes him down super quickly, but a good fighter doesn’t make him interesting. Even when Mace wakes up later still stuck in his cell, we get a little bit of (boring) backstory as Anton talks about how he thought his father was weak and that he wouldn’t be the same. But he does reveal that all Mace is there for is to draw S.H.I.E.L.D. to them.

Daisy takes a look at all of the photos of Coulson in Alaska and finds only one has any attachment to the Superior and that is a photo of a mining facility in Russia and here are those flashbacks I promised you. It takes place “some time ago” but basically Coulson and May ran a mission together there. At this moment in time, they are not as good of friends as we are accustomed to seeing but judging by their conversations, they have had a brief romantic history. Coulson was assigned to retrieve a 0-8-4 (object of unknown origin) and some Russian soldiers are on their way to take it instead. Coulson tries to distract the soldiers while May steals the object but once she finally gets into the vault, she leaves with the object and leaves Coulson with the soldiers.

Fitz is still trying to track the source code and find May and Mack opens up about how if Fitz never helped create the Framework or LMDs then they wouldn’t be in this mess. Mack even goes so far to say Fitz is starting to sound like Radcliffe and to make sure he’s using his science for good. This really does get to Fitz but he does manage to track down the code. He realizes its location is using devices all across the world and this goes to show just how powerful and large the new Framework is and that it’s going to be nearly impossible to pinpoint its origin. Coulson and Daisy go visit the Russian mine from the photo for any further clues and discover three skeletons in the vault room. One of their skulls starts ringing and Coulson gets a chance to talk to Anton. He tells him that the three bodies are the soldiers that Coulson had talked to in the flashbacks and that they were interrogated, tortured and killed for their involvement with Coulson. Not only that, but the soldiers happened to be a part of Anton’s unit and that’s where his hate for Coulson stems from which doesn’t sound like much of a villain motivation but whatever. Daisy uses the ID tags on the skeletons to find a decommissioned soviet military base (with a submarine dock conveniently) and realizes that must be the place but all of this seems too easy and there’s a good reason for that.

Anton is trying to get Mace to denounce S.H.I.E.L.D. but he won’t break and says that he still believes in Coulson and the work he does. Anton really doesn’t care and instead lets his goons kick the crap out of him. The spooky part is that Aida stands there and watches them attack Mace from behind the bars of the cell. Anton called her fake earlier and in response, she just held Agnes’ necklace she stole in the last episode. The show is still trying to build her understanding of humanity but for this to be the penultimate episode of the LMD arc, they are running out of time to act on that storyline. Anyways, all of the agents show up to the base and storm in. Fitz and Simmons go to look for May and Radcliffe, Mack goes to look for Mace, and Coulson stumbles upon the Superior. He rants about his hate for Coulson like any villain would, but Coulson brushes it off and it’s actually Daisy that fights him. She’s pissed at him because it’s Anton that made the Watchdogs possible. She blasts him into the wall a couple times and he tries to use knives on her, I mean this is a super easy fight for her. She ends it by dropping the ceiling on him and then goes to look for the other agents. For whatever reason, she leaves Anton there by himself (sure he’s trapped under rubble) but like, arrest him or capture him or something. Coulson and Mack find Mace and take out the attacking goons that are still kicking him. Fitz and Jemma realize May and Radcliffe aren’t there but do take whatever tech they can find to try and find out where they could be. And then everything goes to $#!%. There is an Aida sighting and the submarine alarm starts going off. Everyone meets up in the middle to find the submarine has left and Coulson makes an order to retreat and tend to the wounded Mace.

Now I’m sitting there watching this thinking, well where’s Anton? Why did they take him out and then just leave him there because it didn’t look like Daisy killed him? And it turns out the characters have a couple unanswered questions too. Jemma and Fitz are talking about how something isn’t adding up. That there is some time unaccounted for when all of the agents couldn’t get a hold of each other. Also, it looks like the LMD detection system had gone off, was disabled, and that the reports were deleted by Coulson for whatever reason. Fortunately, Jemma had the reports sent to her and it’s revealed that there are four LMDs are on the S.H.I.E.L.D. base and that they are Coulson, Daisy, Mack and Mace. That can’t be good. Not only that, but this new Robo Coulson awakens Robo May. Yikes. Aida is then seen back at the Russian base examining Anton’s body (who is still alive) and mentions that he apparently still has a purpose to serve but not before clarifying that they have in fact infiltrated the top operatives of S.H.I.E.L.D. just in case you couldn’t follow the switcheroo. And if you were still curious about what happened to May and Coulson from the flashback? She rescues him and they flirt some more. They actually talk about wanting to date each other if May’s current relationship with a shrink (her former husband Andrew AKA Lash) doesn’t work out. It’s sweet but we know what happens so whatever. Anyways, only one episode left of the LMD storyline so things are about to get crazy and who know what’s coming after that so until then, farewell, True Believers! 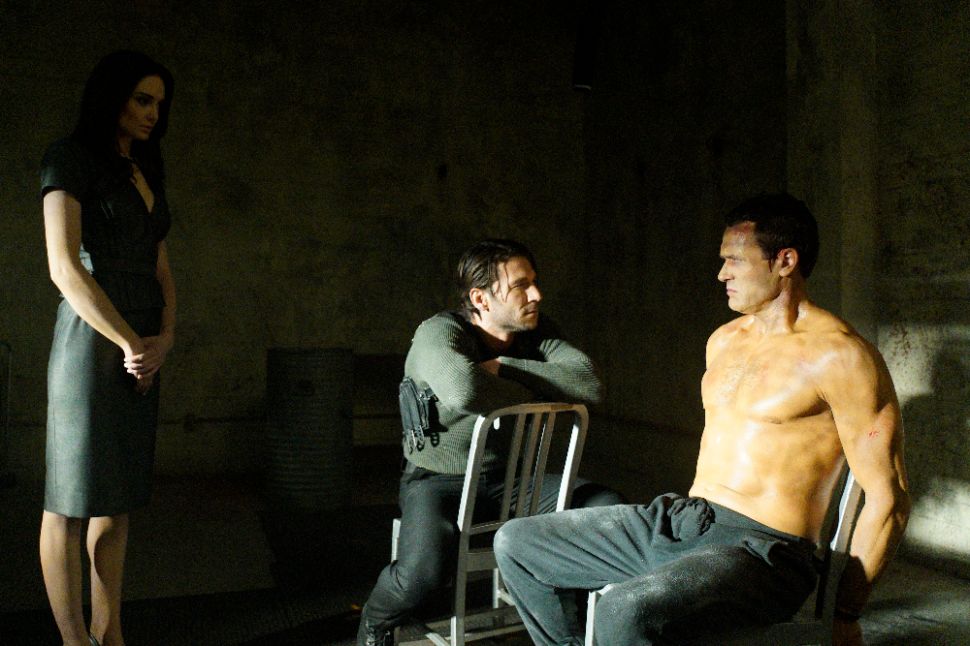