The Menzingers are known for making leaps. Not just into the audiences crowding the edges of the stage, but in their music, too. But on their new album After the Party their dynamic, introspective punk has been replaced by an aged cry for nostalgia, rebellion, and bands that sound a lot like The Clash.

2012’s On The Impossible Past brought a more polished pop-punk sound to the band’s material, while showing huge leaps forward in terms of songwriting ability, literary references and album structure. It remains one of the best pop-punk albums of the decade. Their follow-up, Rented World, maintained the status quo for a generally solid release. Now, their fifth record After The Party attempts a change in direction, but produces diminishing returns.

The Scranton, Pa., band has always sounded a bit like a hardcore Gaslight Anthem. In the same vein as pop-punk stalwarts Taking Back Sunday and Blink-182, The Menzingers have two vocalists who share the mic and songwriting duties. Greg Barnett and Tom May’s vocal tendencies are indistinguishable in their worst moments, and cohesive at their finest. Barnett’s fierce grit often makes him the more compelling of the two, and he is considered by the cultish fanbase to be the band’s frontman.

After the Party refers to both an after-party and the fact that the band members are slowly approaching 30 and leaving their “sex, drugs, and rock and roll” days behind them. “What are we gonna do, now that our 20s are over?” asks Barnett on the first track “Tellin’ Lies.” The answer? Apparently, make a disappointing, paint-by-numbers rock record.

The biggest problem with After The Party is the way it reiterates previous thematic elements of The Menzingers’ music, with half the lyrical craft of the past few albums. The anger of some of their biggest influences, Rancid, Against Me!, etc, are gone as they’ve grown wearily into adulthood.

While the album starts off strong enough with lead single “Lookers,” with its stripped-down verses built on Kerouac references gifting us the catchiest chorus of the album, Party quickly grows stale. Too muddled in its lack of identity, what at first sounds energized reveals itself to be little more than the same old formula repeated ad nauseam. The album’s verses are too fragmented and the choruses eventually all bleed together; the production becomes so distracting it eclipses any of the bands knack for dynamic songwriting.

“Midwestern States” is especially guilty of lyrics that don’t fit the rhythms of the verse. The chorus sounds like All Time Low with laryngitis. It’s here when you may first start to realize The Menzingers’ songwriting isn’t quite up to the standard they’ve set for themselves in the past.

Considering this is a band whose last lead single was called “I Don’t Wanna Be an Asshole Anymore,” the lack of humor and personality here is particularly surprising. While Rented World may have been overproduced for a punk record, at least the lyrics kept it firmly planted in the genre. After The Party feels lost between old-school rock ‘n’ roll and nasally pop.

“Charlie’s Army” is the only humor you’ll find on After The Party. It’s one of the funniest songs Barnett has written. “I love my Juliette, but her ex-boyfriend wants me dead” only pales in comparison to comparing an ex’s wasted buddies to a military force.

By emphasizing the acoustic rhythm guitar and steady percussion that accompanies the entire record, though, most of the album’s compelling songwriting gets lost in the final mix. May and Barnett are already not the best at annunciating; this sound mixing doesn’t do them any favors.

“The Bars” is May’s most thrilling contribution here. It pulls off slow and heavy without sounding overwhelming. Lyrics like “Nightstand memorial to past libation/ A sudden fear of phone vibrations” match up to some of the group’s finest. Most of his other work (“Thick as Thieves”, “House on Fire”) pales in comparison, and gets lost as the rest of the album goes through the motions.

As you work your way through the record it becomes apparent The Menzingers have said it all before. If it’s bittersweet longing of youth you crave look no further than On The Impossible Past. Five years later, putting a nostalgic spin on calling cigarettes “smokes” and glorifying drunk driving does not make it any cooler than it ever was (these lyrical refrains have always been some of the most cliche aspects of The Menzingers’ image).

The record is at least enjoyable enough for fans to reach the title track, the second to last, and realize it is the best song on the album. “After the Party” ironically mocks the rocker lifestyle, while embracing the inherent dorky-ness of rocking out alone in your basement. Hearing Barnett growl “Everybody wants to get famous, but you just want to dance in the basement” will make you believe he did the same before the days of living success, and part of him desperately wishes to get back to it.

Punk used to be about spirit. It didn’t matter if you could play, often times it was better if you couldn’t. Bands like Joyce Manor and Title Fight prove times have changed. The scene is calling for educated songwriters who can play, and more importantly, evolve over the course of a handful of releases. The Menzingers have demonstrated these qualities before, but that band is nowhere to be found on After The Party. I guess they gave us fair warning. All good things do fall apart. 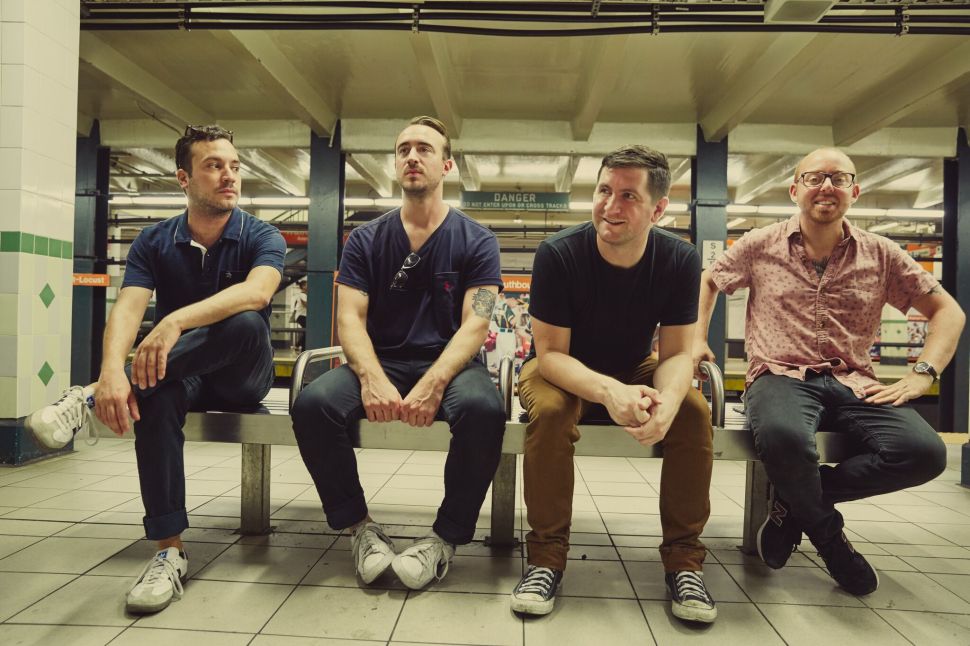