To understand Amazon founder Jeff Bezos, it helps to understand that he is building a giant clock in his backyard designed to last 10,000 years. Well, he’s not building it. The Long Now Foundation is, but he’s the main one paying for it. And it’s not in his backyard exactly, but it is on his land.

The clock illustrates his most important quality: the man takes a very long view. When he put a book store online in 1994, it was never meant to be just a store. He had a vision for a company that would serve as the infrastructure of all marketplaces online. And that’s what Amazon has become.

In a lengthy analysis published recently in The Yale Law Journal, by New America fellow Lina M. Khan, she illustrates how Amazon does not tso much help everyone sell goods online so much as the company makes it all but impossible to sell goods online without it.

Her case argues that Bezos’s company should draw the attention of U.S. regulators. In fact, she explains that in the 50s or 60s Amazon surely would have, but since the Reagan administration, anti-trust enforcement has become myopically focused on the final price of goods to consumers. Prior to Reagan, regulators would assess the whole structure of a market to see if something made it impossible for new competitors to enter.

But today, if consumers aren’t getting gouged, regulators won’t intervene. And if there’s one thing Amazon is good at, it’s lowering prices for consumers.

Yet, many of the companies that compete with Amazon also rely on it, whether by selling goods through its marketplace, hosting data in its cloud or distributing intellectual property on its platforms. Lately, Amazon has even been experimenting with providing wireless service.

“Amazon’s conflicts of interest tarnish the neutrality of the competitive process,” Khan writes. “The thousands of retailers and independent businesses that must ride Amazon’s rails to reach market are increasingly dependent on their biggest competitor.”

Her note should soon become required reading for anyone who wants to understand online business today.

“Amazon has established dominance as an online platform thanks to two elements of its business strategy: a willingness to sustain losses and invest aggressively at the expense of profits and integration across multiple business lines,” she explains.

Here are five examples she gives of Amazon using its market dominance in an anti-competitive way.

They’re my diapers now…
Selling goods so cheaply it preys on competitors.

In 2010, Amazon acquired an e-commerce upstart called Quidsi, whose most famous brand was Diapers.com. Its founders had resisted an acquisition by Amazon, so the e-commerce giant programmed its bots to constantly scan Diapers.com’s prices and continuously undercut them, no matter how much it cost. Experts estimated it cost Amazon more than $100 million.

Quidsi eventually gave up as all of its customers were siphoned away by unsustainably good deals.

Most famously, in a less connected age, Standard Oil would lower prices in one region where it faced competition, while subsidizing those losses in other regions where it had driven all competitors out.

Similarly, Amazon is able to offset retail losses with the billions of dollars it makes in its main profit center, Amazon Web Services—its cloud platform.

We’ve written a lot about Amazon’s fights with major publishers over the price of electronic books, arguing that on balance Amazon’s stance has been good for readers and writers. There’s a whole class of writers today making a more-than-comfortable living from their work, and most of the money their intellectual property makes flows to them.

We can’t argue with Khan on this point, though. The more people who buy e-books through Amazon the less likely it will be that anyone can ever read an ebook on anything that doesn’t say “Kindle” on it somewhere. That’s why Amazon was so happy to pay publishers more money for ebook bestsellers it sold than consumers actually paid it.

Khan writes, “The marginal value of the first sale and early sales in general is much higher for e-books than for print books because there are lock-in effects at play, due both to technical design and the possibilities for and value of personalization.”

For example, Amazon publishes in its proprietary AZW format. The more books people buy in that format, the less likely they will be to ever switch to a Kindle competitor, because that would mean keeping part of their library on one device and part on another.

Hey! You! Get onto my cloud!
Effectively forcing competitors to become customers.

We recently covered the business model of online video distributor Hulu. After that article ran, a source with knowledge of the industry wrote the Observer to say that insiders see Hulu as the Dr. Pepper to Amazon and Netflix’s Coke and Pepsi. Be that as it may, here’s a weird fact: Netflix relies on Amazon for hosting much of its cloud data, which is like Pepsi taking over delivery for all of Coke’s sodas.

Khan gives a more down to earth example of how this can undermine competition, writing that “a flour mill that also owned a bakery could hike prices or degrade quality when selling to rival bakers—or refuse to do business with them entirely. In this view, even if an integrated firm did not directly resort to exclusionary tactics, the arrangement would still increase barriers to entry by requiring would-be entrants to compete at two levels.”

It’s not completely unusual for competitors to work for each other, to be honest. I once met a union confection worker who spent his whole career making Nestle products in Hershey plants, because the Swiss chocolate maker was better off making here the the sweets it sold here.

On the other hand, both companies just made sweets. It would be a different matter if Hershey manufactured candy and also owned all the stores where it was sold.

Amazon has quietly become not just a retailer, but a maker of certain products.

Rain Design has sold its laptop stands through Amazon for years, but then all the sudden its sales began to tank. AmazonBasics suddenly had a very similar product on offer, but at a much lower price, as Bloomberg reported.

Amazon had been in a position to study products other people made and sold on its platform for years and then quietly move in and steal their markets away, on the exact same platform.

“In using its Marketplace this way, Amazon increases sales while shedding risk,” Khan writes. “It is third-party sellers who bear the initial costs and uncertainties when introducing new products; by merely spotting them, Amazon gets to sell products only once their success has been tested.”

All your trucks are belong to us
Forcing competitors to use its services or face increasing operating costs.

In perhaps the most insidious story, Khan illustrates how Amazon uses its dominant position to force competitors to incur costs unless they have their services provided by Amazon.

Amazon doesn’t just let competitors sell its goods through its site, it also has Fulfillment by Amazon (FBA), in which it stores others goods in its warehouses, packs them up and ships them.

Some competitors with enough scale want to do fulfillment in house, assuming they could shave a bit more margin. Eventually, though, Amazon became such a big customer of the shippers, such as UPS and FedEX, that it was able to drive its shipping prices down dramatically. This forced the shippers to raise their prices on everyone else. The dominoes fell and suddenly FBA became much more attractive, because that was the only way Amazon competitors could ship at Amazon prices.

“Amazon had used its dominance in the retail sector to create and boost a new venture in the delivery sector, inserting itself into the business of its competitors,” Khan said.

This is also a clever way it can recoup costs from offering some products below cost. Rather than putting the cost on consumers, by raising prices on something else, it puts those costs on competitors, by forcing them to pay Amazon to fulfill orders.

Despite the company’s dominance, though, it still isn’t earning much more profit on the dollar than it ever has. Yet investors continue to back it.

“Amazon’s shares trade at over 900 times diluted earnings, making it the most expensive stock in the Standard & Poor’s 500,” Khan writes.

So what are all those investors betting on? A reasonable guess is that they are betting on a company that’s one day so dominant that basically everything will be bought through Amazon, and when that day comes we’ll all finally be paying full price again.

But Washington is blind to Amazon’s monopolistic position, says Khan, because consumers are getting a lot of good deals.

Her analysis helps to illustrate how network effects are accelerated online. We have reached a phase in the internet where those effects have settled a new class of giants into place. Apple has the most money. Google has the most reach. Facebook has the largest community. And Amazon touches the most stuff, which could make it the most resilient. We’ve written in the past about how a distributed internet could unsettle the new monopolies online, but it’s hard to see how that web architecture could best Amazon’s real world network of warehouses and trucks.

By the end of Khan’s epic analysis, many readers may be convinced that Amazon really has achieved the status of a classic trust out of the Progressive era. So then what is to be done?

Assuming that regulators could be convinced to take action, Khan sees two possible courses of action.

“Key is deciding whether we want to govern online platform markets through competition,” she writes, “or want to accept that they are inherently monopolistic or oligopolistic and regulate them instead.”

Given the company’s soaring popularity with regular people, though, it’s a fair bet that Bezos will finish that clock of his before Washington does anything. 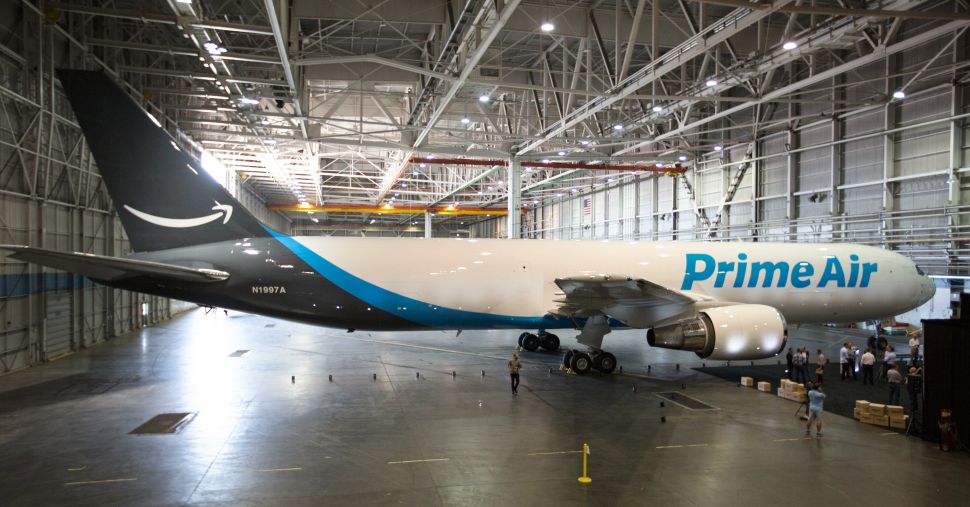