My name is Bruce Springsteen, and one day soon, when the windows of your mosques are smashed and the synagogues lie in ashes, when the skies are gray with dust and the sea has risen to wash away the roads, when the stars and stripes of our flag stand for discrimination and fear, I will wonder, could I have made a difference?

Could I have made a difference? Did I do everything I could have done?

Meryl Streep and that speech she gave at the Golden Globes got me really thinking about this.

It’s all well and good for Meryl Streep to give rabble-rousing speeches on television, but unless she is hosting a benefit for each and every congressional candidate in her state running in the 2018 midterm elections—New York, California, Connecticut, I don’t know where she lives—it’s totally freaking meaningless.

At the end of the day, what did that speech of hers accomplish? A lot of people said, “Oh, great job, Meryl!” A lot of people patted her on the back, tweeted how wonderful she was and said, “You go, girl!” But it meant virtually nothing in terms of winning any elections, getting anyone out to the polls, changing any minds. I doubt it even made one single person register to vote, and it probably didn’t cause anyone to donate to a local congressman’s election campaign.

Unless she backs it up with some actual action, specifically geared toward the midterms, her words are just more self-serving, self-congratulating liberal fireworks. Sorry, Meryl. That’s what we liberals do: we set off fireworks at our own backyard parties.

I bet you felt just great and all proud of yourself when you re-posted Meryl’s speech on your Facebook page. I bet you thought, “Well, I just made a difference!” You didn’t. All you did was make it so your friends would go, “Oh, hooray for our side, you think like us, too!”

And I realized, well, that’s precisely what I’ve done. I’m getting press for saying some anti-Trump stuff from the stage in Australia. That’ll show him. That will impact the midterm election for sure! Boy, I really went out on a limb there, really took a risk.

So I ask again: Could I have made a difference in the last election? Some people think I’m one of the few people who actually could have.

Trump won Wisconsin by about 22,000 votes. Shit, 22,000? I sold 1 million copies of Human Touch—without the E Street Band—and even I can’t stand that record.

It’s been suggested that in the weeks and months leading up to the election, I should have followed Trump around from rally to rally, especially in September and October when he was hitting the Rust Belt states hard. After all, those are supposed to be “my” people, too.

Y’know, imagine this: just as he was getting up to speak, I’d pop out of a van right outside the venue, step up on the back of a pickup or something, and play a few songs. If I was playing across the street from a rally, at the same time, you’re telling me they wouldn’t have turned their back on Le Grand Orange—that’s what Garry Tallent calls him, he’s an old Mets fan from way back—and rushed over to wherever I was?

Imagine if I had done that for two or three weeks. If I had Just birddogged the man! I could have stolen his audience, stolen all the TV crews—you don’t think they wouldn’t have rushed to me, and wanted to hear my opinion on the big man? Not only would I have won over some of his supporters, but Trump almost definitely at some point would have come after me, and how bad would that have been for him? You think the new boss could’ve attacked the original and gotten away with it?

He doesn’t like being upstaged, you know he would’ve have come after me. Can you imagine if he attacked Bruce Springsteen? Even without doing the math, on just that alone he might have lost enough votes to lose him the election.

How hard would it have been for me to give up three or four weeks of my life this past fall or summer, and followed him in a van from rally to rally?

Let’s talk about numbers. Trump won Wisconsin by about 22,000 votes. Michigan by about 11,000. Shit, 22,000? I sold 1 million copies of Human Touch—without the E Street Band—and even I can’t stand that record. Eleven thousand? That’s the first night of a four-night run for me.

Look, if I had done that—if I had followed him around from rally to rally, stood on a park bench across the street, played “Kumbaya” or some Suicide song on the acoustic guitar and then gave soundbites to the 800 camera crews that were there—yes, I totally think I could have swung those votes. Between the media, and Trump getting pissed at me for stealing his thunder, shit, I could have gotten most of them on the first day.

Now in North Carolina the margin was 180,000, and I know that sounds like a lot, but what if I enlisted Garth Brooks and, oh, I don’t know, Darius Rucker? Oh, and are you telling me Dave Matthews wouldn’t have shown up? Of course he would have. And remember, 180,000 isn’t really 180,000—because you take one from Trump and put that vote in Hillary’s column, that actually counts as two. Even if we couldn’t get the venues, we could have played in parks. Like the cops are going to bust Bruce Springsteen and Dave Matthews for playing in the park? Yeah, that’ll happen. The cops will be standing in the front lining up for selfies.

So I look myself in the mirror, and I ask, could I have made a difference?

And now I answer yes. I think I could have.

Now, just because you could have shot Hitler, that doesn’t mean you are guilty because you didn’t, right? I mean, probably 5 million Germans could have killed Hitler at one point, but we can’t condemn every one of them, right?

And by the way, I’m not suggesting we kill anyone! This is just a comparison—an analogy. Or is it a metaphor? Whatever. And I’m not comparing Trump to Hitler, either, no sir, don’t try to hang that on me. I’m just trying to make a statement about inaction—why is it a big deal that I didn’t do everything I could when I was one of the few who could have made a difference?

I’ve spent my life trying to tell a story about Americans that tried to do good when the easier route would have been to do bad, or to do nothing. But were those just words?

I guess this is the answer.

I’ve spent my life trying to tell a story about Americans that tried to do good when the easier route would have been to do bad, or do nothing; about an America where everyman was King, an America which was defined by its working men and women, not its oligarchs; an America where your children can look at you and say, just with their eyes, “Will our lives be as free as yours, daddy? Will we have the same rights and choices as you, will we have clean air to breathe? Daddy, will we have the ability to look the rich in the eye and say, ‘You may have more than us, but you do not have more rights than us.’ ”

I’ve told the story of an America where you asked questions, and even if you didn’t find answers, you were better for asking.

So maybe, just maybe, I fucked up. So here’s what I’m thinking: The 2018 midterm elections are going to be here in no time. The only chance for real change is if we vote more Democrats in, and flip control of the House of Representatives.

It’s O.K. if this stuff doesn’t matter to you, really, but if it does, whether you’re playing arenas or coffee shops, you need to be using your power to get Democrats elected in next year’s—NEXT YEAR’S!—midterm elections. That’s all that matters. That’s all that matters. Getting results in the midterms means more than all the petitions in the world, more than all the outraged Facebook posts, more than all the angry and sarcastic blog posts. The nuts and bolts of making people aware of their candidates, raising money for those candidates, and getting people registered and to the polls…that’s what matters, because everything, I mean everything, changes if the House flips.

So that’s why I’m committing, today, to make a difference.

First and foremost, that means electing Democrats to congress in the 2018 midterms. So, in the six months leading up to the 2018 elections—it might be just three or four months, haven’t confirmed the tour routing yet—I will be playing as many shows as possible, with the express purpose of doing everything I can to elect Democrats to congress in 2018. I will be introducing the candidates from the stage, making sure everyone coming to the concert knows who will be running in their district, registering voters, making sure voters know their voting rights, and putting money directly into the coffers and war chests of all the local congressional candidates.

Listen, if you don’t care, that’s fine. I am not actually criticizing you if you don’t care. It is a free country, as of today, anyway, and that is your right. And if you support Trump or the Republicans, that is your business, too. But if you want a change, don’t act all outraged about what’s going on and then do absolutely nothing about it. Don’t post something on Facebook or say something in an interview, and get all your friends going, “Oh, you are so right! Right on, brother!” and somehow actually think that makes a difference. It doesn’t.

To quote John Lennon: “If you go carrying pictures of chairman Mao, You ain’t going to make it with anyone anyhow.” Be Mao. Don’t just carry his picture. I mean, not literally Mao, but you get the idea.

Listen, I’m not saying everyone who picks up a guitar has to put on a Ché beret and fight the power. I really mean that. “Mustang Sally,” after all, is a helluva song.

But don’t wear Woody Guthrie’s shoes unless you are prepared to walk in his footsteps.

I have to run. Little Steven and I are trying to convince Jann to put G.E. Smith into the Hall of Fame. 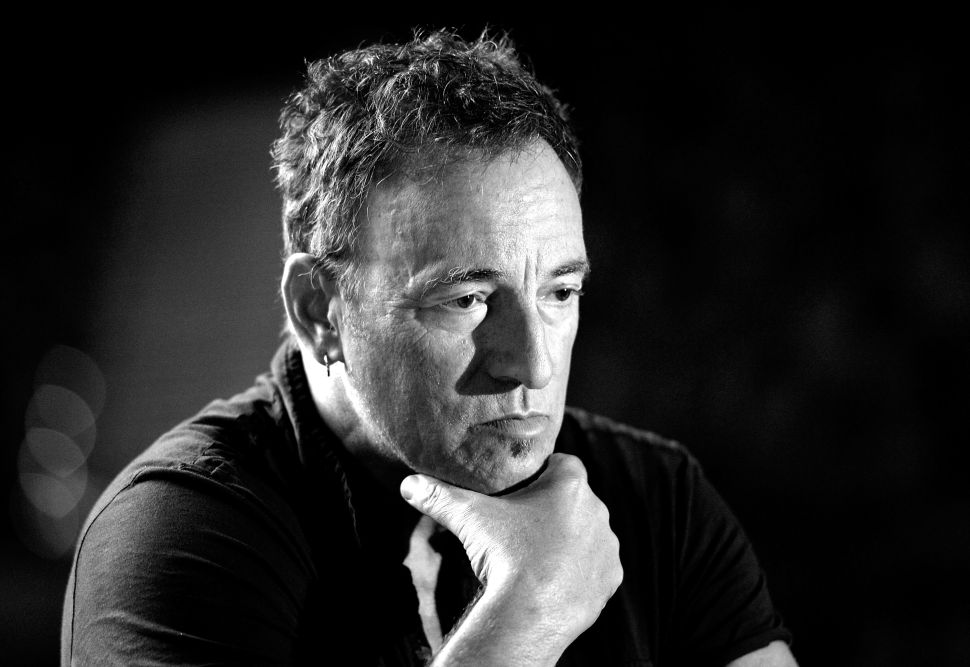