There’s a throw-down going on in the art world. On the one hand, we have the first exhibition in China of major contemporary artist Anselm Kiefer, entitled “Anselm Kiefer: Coagulation.” It is curated by a big name in the art world, Beate Reifenscheid, who is president of the German branch of ICOM (International Council of Museums), and was held from 19 November 2016 until 8 January 2017 at CAFAM (Central Academy of Fine Arts Museum, in Beijing). It is set to appear in three other Chinese cities. Of the 87 works included in the exhibition, 80 are privately owned by a Chinese collector who lives in Germany, Maria Chen Tu. The exhibition was jointly organized by CAFAM and Bell Art, which is a company, based in Hamburg, that promotes cultural exchange between China and Europe. To be clear, this is not a wrangle over legality or ownership. It’s about something more subtle and difficult to grasp, like wrestling over who gets to hold smoke.

The issue is this: Kiefer’s main gallerists, the people who earn him money and make money off his work, issued a joint statement claiming that this entire show was planned without the artist’s consent or input, and that “to plan such an important showcase in China without the artist’s input is disrespectful.” This is a sticky issue, because there is no legal argument in play. The works exhibited are in private hands, and the owners can do with them what they wish. According to Edgar Tijhuis, a specialist in art law and crime, the organizers of the exhibition have a free hand: “Based on what has come out about the exhibition, I don’t see any legal base for anyone to interfere with the three stops of the exhibition still to come. It’s telling that none of the mutual reproaches refers to any relevant laws or even legal principles.” But Kiefer refused to attend the show, and the art world is atwitter over whether artists and their commercial galleries should have any input, should be asked for consent, for a didactic exhibition of the artist’s work, featuring art that they long ago sold, and lost any legal control over. Should a living artist have control over how his or her work is exhibited? Should their galleries, which function largely as agent/managers? Or once the art is made and sold, is it out of the hands (and beyond the opinion) of the artist and the seller?

The official PR consultant for the exhibition told The Art Newspaper that this was “a classic case of how commercial interests in the art world can overreach and of how the profit motive seeks to control and restrain curatorial freedom.” If it is about money, and a concern that this exhibit would somehow negatively-impact future Kiefer art sales in China, or beyond, it is an odd argument. This qualifies as a blockbuster exhibition, the first in this wealth-soaked nation that is eager to buy Western trophies. Surely that can only be a good thing for sales? It is not as if the exhibit is presenting its subject in a bad light—this is no “degenerate art” horror show, but a highly-respectful presentation of a great artist’s work. Thaddaeus Ropac, owner of one of the three galleries who represent Kiefer (the others are Gagosian and White Cube) stated: “We categorically reject the idea that we were against the exhibition at CAFAM in Beijing because of commercial interests. Why would the exhibition have a negative impact on galleries? Our role is to support our artists in all their ideas and projects.” Such an exhibit should only increase interest in the artist, intellectual and commercial, which is good for galleries.

Perhaps the issue is really about respect and control (with a hint, it might be said, of bullying?) A living artist as canonical as Kiefer feels that he should be asked for permission to mount exhibitions of his work, which may be linked to giving him some control over its interpretation. One wonders how much of this is coming from Kiefer alone, and how much is at the encouragement of his three mighty galleries. The heart of the problem appears to be that the galleries and the artist wanted to be asked for their blessing for this exhibit. There may have been some requests, or even restrictions, on the part of the artist related to how the work is presented—a sort of artist’s “rider.” But there is no precedent for curators having to ask permission of living artists, or their estates, simply to mount an exhibition of works no longer owned by the artist or his estate. It is a different story if the exhibition involves work borrowed from the artist, in which case the owner of the work, artist or collector or institution, might reasonably have some preferences regarding the handling of their loan object. But this case is akin to an author expressing rage at a praise-filled review of his book, or of a glowing (though unauthorized) biography.

There is a long tradition, dating back at least to the famous Roland Barthes essay published in 1967, standard reading in art theory and history courses, “The Death of the Author,” a part of which argues that, the moment a work of art is exhibited or sold, the artist loses any right to interpret it. Most critics adhere to this, but the concept can be frightening to artists. Though some artists, like Magritte, enjoyed the freedom of not having to interpret their own work, others have a “correct” interpretation in mind when making art, and dislike the idea that the public can interpret it any way they like.

To get an array of views, I asked a number of artists, curators and artist managers to weigh in on the case. Curator Beti Zerovc finds it oddly skewed that an exhibit should feature 92% works from a single private collection. That said, she says, “I would generally stand on the side of curators, because the pressures of the market—of dealers and collectors—on them is usually just horrible, and this pressure is, for sure, not in the public interest.” Artist Joost de Jonge concedes that “Only seldom is a show a translation of the artist’s research and concerns. I feel strongly that a show should be fully in line with the artistic concerns voiced by the works it includes. A real exhibition, with art for art’s sake, remains a rare thing.” Rosa Lux, an art producer and manager, sympathizes with the artist and gallerists: “From the position of an art producer, respecting and protecting the wishes of the artist, my personal stand is unquestionable and based on the fact that Kiefer was bluntly excluded from the process, and has had his work presented without any consideration of his artistic input. I find it difficult to see this question as one of curatorial freedom.” Part of Kiefer’s objection was that he was never contacted regarding the exhibit, whereas the exhibit organizers claim that they sought contact but never got a response. One of the artist Lux produces, JAŠA, concurs: “This seems an exemplary case of power plays. Of course, an artist always should have a say, when it comes to presentations of his own work. Today’s sales contracts usually include that. I think that part of the art community is to exercise forms of communication that can set standards, rather than elude them.”

It was perhaps inevitable that artists should side with the Kiefer’s right to have input in how his work is interpreted, and the curators would support the freedom of the exhibition. It shows that this is not a clear-cut issue. It is easiest to peel away what is not involved: It does not appear to be a legal matter, just an ethical one. Nor does it appear to be about money, as such an exhibit will only increase buyers’ interest in Kiefer’s work. It comes down to whether creators should have to be asked for permission to comment upon their work in a public forum, for a curated exhibit is a commentary presented to an audience. In this case, it seems to be a respectful and complimentary one, opening Kiefer’s work to an enormous audience who likely had never come across it before—the sort that most artists would kill for. From my perspective, as a professor, writer and cultural commentator, we are sailing into murky waters if exhibitions must be lashed to the wishes of those exhibited. Would Diego Velazquez have approved of the current exhibit of his portraits at the Metropolitan Museum of Art? And, aside from asking him some questions that art historians cannot inquire of a long-deceased artist, would his opinion make a difference?

This is the latest in Observer Arts’ new series Secrets and Symbols, by author and art historian Noah Charney. 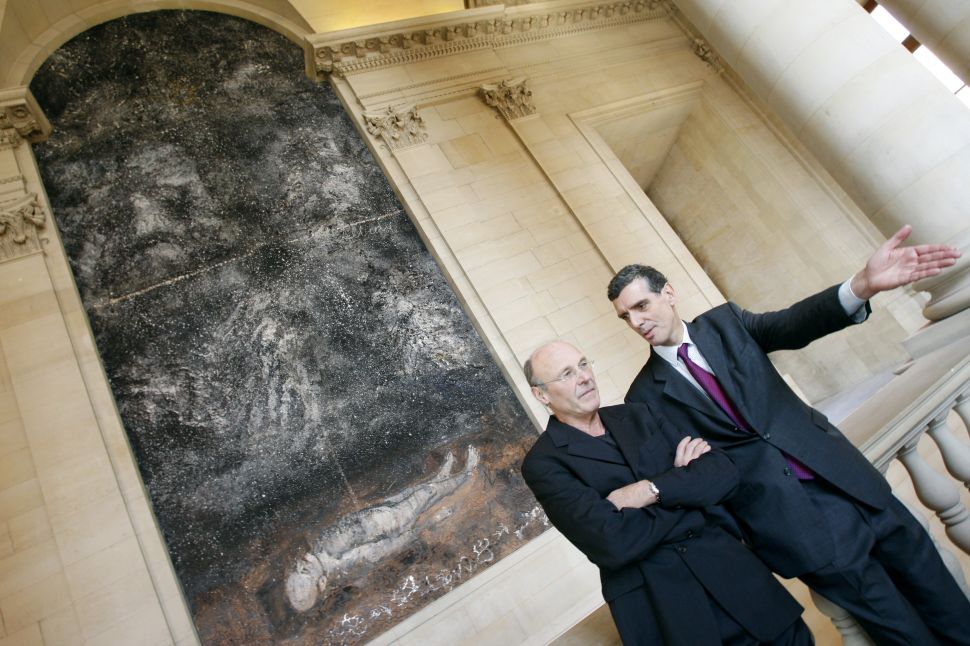