Belarus rarely makes it into Western news reports, and hardly ever in a positive way. Governed since 1994 by Aleksandr Lukashenka, a Soviet-era throwback strongman—in a perfect touch, he once ran a Communist collective farm—Belarus for decades has been bemoaned as Europe’s last dictatorship thanks to its poor human rights record and less than democratic ways.

Lukashenka has shown little interest in currying Western favor until quite recently. His regime, guided by the strong hand of the secret police—still termed the KGB in fully Soviet fashion—has imprisoned and occasionally disappeared journalists and politicians who get on Lukashenka’s bad side. As full-time Soviet nostalgists, the regime and its leader have pined for days of lost Communist glory, and efforts at liberalization of the economy and society have made little progress in Minsk.

The ramshackle Belarusian economy remains mired in statist inefficiencies, and the only thing that has kept Lukashenka afloat all these years has been Kremlin help. Vladimir Putin long courted Minsk with loans and low prices on imported Russian energy, in exchange receiving Belarus as a vital buffer state against NATO and the West.

Its geographic location, bordering on three members of the Atlantic Alliance—Poland, Lithuania, and Latvia—gives Belarus an undeniable importance to Russia, one which has only increased since 2014, when Moscow’s ties to NATO soured after Putin annexed Crimea and invaded eastern Ukraine. Given perennial Russian fears of invasion from the west, Belarus looms large in Moscow’s military imagination—and war plans.

In practice, the Kremlin has long considered Belarus hardly more than an extension of Russia in security terms. For years, relations between Moscow and Minsk have been close in defense and intelligence matters, and joint military exercises with Russian and Belarusian forces have been commonplace. Since the latter uses Russian weapons and defense doctrine, and both armies speak the same language, the Kremlin has considered Belarusian forces to be fully interoperable with its own. In Russian war planning, Minsk’s military has counted in the Kremlin’s numbers.

That is changing, however, and the resulting alteration in the strategic balance in Eastern Europe has set off alarm bells in Moscow. There is irony here, since for years it was Lukashenka who wanted closer ties to the Kremlin, not the other way around, even expressing a desire for full political union with Mother Russia. Yet Putin was careful about getting too chummy with the dictator in Minsk, whose unsavory human rights record caused bad headlines on a touchy subject where Moscow didn’t need additional attention from Western governments and NGOs.

The White House is either parroting ridiculous Russian fake news or it is consciously pushing Kremlin disinformation on our Intelligence Community.

Over the last couple years, however, Lukashenka has been quietly distancing himself from his longtime patron, seeking discreet ties with the West. Here the Kremlin’s reducing some of its financial aid to Belarus—for instance, cutting back supplies of cheap oil—has been a key factor. In reply, Minsk’s position on controversial topics like Ukraine has grown less supinely pro-Russian than Putin expects from longtime clients. Lukashenka’s increasingly pro-Ukrainian position is now out in the open, as revealed by his recent statement that “brotherly Ukraine” is fighting for its independence. Although the Minsk strongman was politic enough to omit whom his neighbor is struggling for independence from, the message was received clearly in Moscow.

Relations between Moscow and Minsk are now on the verge of full-blown crisis. Last week, Lukashenka said that the new airbase which Putin plans to put in his country to serve the Russian air force wasn’t going to happen, lashing out at Moscow in an epic press conference that lasted more than seven hours and brimmed with anti-Kremlin sentiments. In response to deteriorating relations, Moscow has reinstated border controls on its western frontier. The previously unguarded frontier with Belarus will now be patrolled by the Federal Security Service, Putin’s powerful FSB.

Lukashenka is deeply worried that the displeased Kremlin may try to overthrow his regime, replacing him with someone more pliant to Putin’s wishes. Minsk fears the sudden appearance of Little Green Men, saboteurs and terrorists from Russian intelligence, the shadowy operatives who led the invasion of Crimea three years ago, trying to evict him from power. Here Lukashenka’s fears are entirely valid, and he faces the difficult predicament that, given the exceptionally close ties between his KGB and Kremlin security services – most Belarusian security higher-ups have been trained in Russian spy schools—he can’t be sure who in Minsk is really on his side.

Therefore, it’s no surprise that Lukashenka is flexing his muscles right now, trying to send a message of strength while assessing who in Belarus is loyal to whom. There’s a major military exercise underway right now that includes building obstacles on the main highway that runs from Minsk to the Russian border. Reservists have been called up for these exercises, including retired military officers returned to service, to practice stemming a possible Russian invasion.

Arseniy Sivitskiy, director of Minsk’s Center for Strategic and Foreign Policy Studies, which is Belarus’ only think-tank devoted to such matters, in a new interview suggests that Putin may be using the current chaos in Washington, with the still-forming Trump administration seemingly at sea about which direction its foreign policy will take, to move against Lukashenka. What’s coming may range from subversion and intimidation by Russian intelligence to all-out invasion, according to Sivitskiy. Although Sivitsky doubts that the worst-case scenario will happen, the real nightmare is that Moscow may resort to the use of tactical nuclear weapons against NATO if any aggression against Belarus does not go according to Russian plans.

Then there’s the knotty issue of what exactly the White House would do. Belarus isn’t in NATO and it cannot expect overt Western help against Putin. But would President Trump do anything at all in the event of Russian aggression against yet another neighbor? The new administration’s repeated public fawning over the Kremlin, plus its exceptionally tepid support for Ukraine as fighting increases there between the Russian military and Kyiv’s forces, provide ample room to wonder which side Trump is really on here.

Not to mention the weird question which the White House recently asked the Intelligence Community about Belarus. According to a new AP report, “national security aides have sought information about Polish incursions in Belarus.” It should be noted that Poland, a stalwart NATO member, has conducted zero incursions into Belarus, and the notion is frankly bizarre outside the paranoid halls of the Kremlin and pro-Russian websites that seek to stir up anti-NATO sentiments with fake news.

However, Polish military incursions into Belarus have featured prominently in recent Russian military exercises, namely ZAPAD (West) 2009 and 2013, where a Drang nach Osten by Warsaw was the exercise scenario—twice. Therefore, the White House is either parroting ridiculous Russian fake news or it is consciously pushing Kremlin disinformation on our Intelligence Community.

Neither option bodes well for security and stability in Europe right now. Belarus is on NATO’s doorstep, unlike Crimea or eastern Ukraine, and the possibility for any military crisis there spiraling dangerously out of control is real. It would be best for all sides if any such crisis is averted before it unfolds. 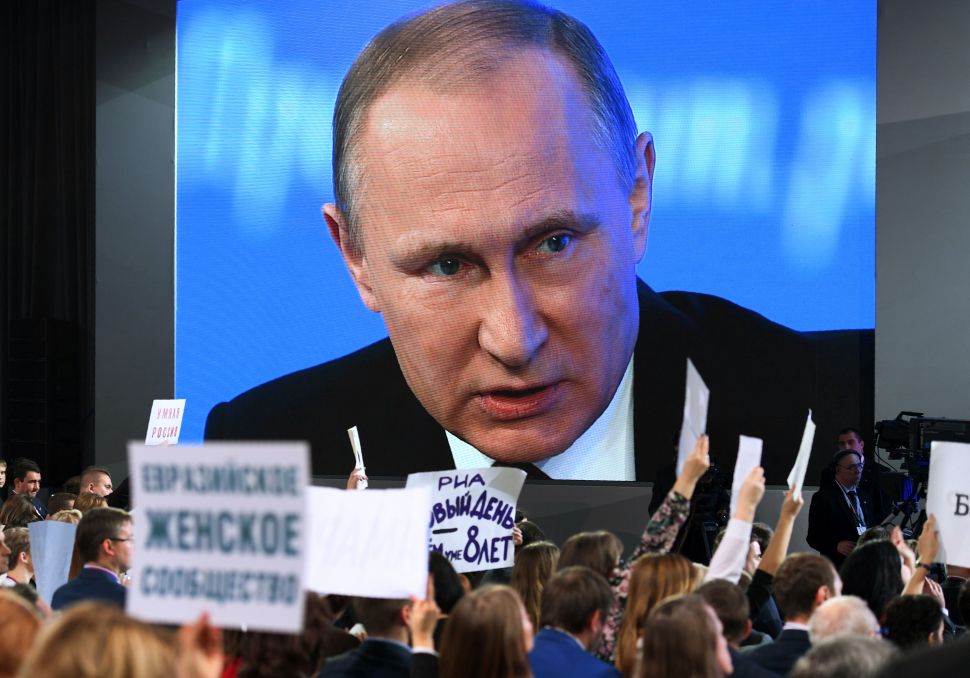