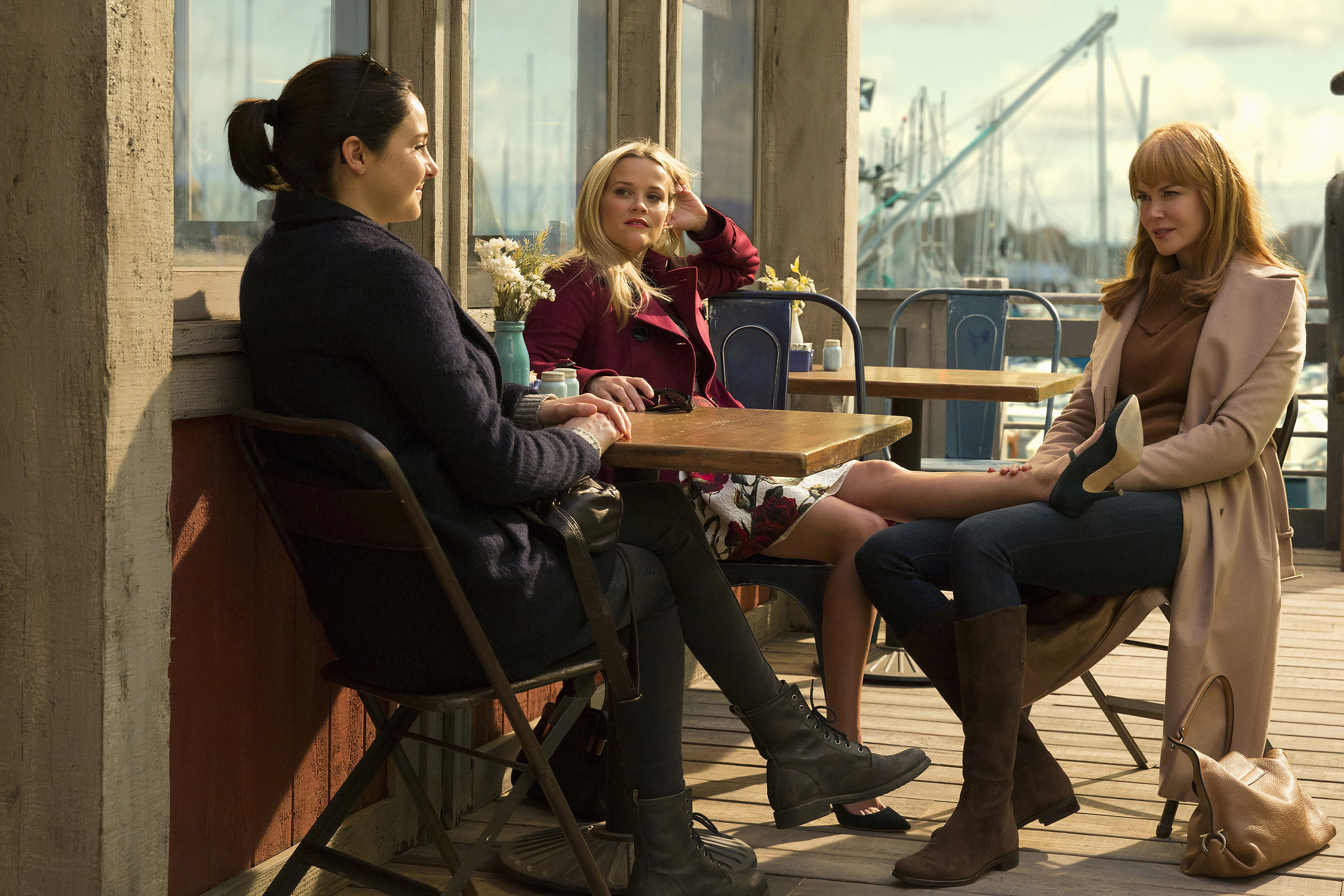 Towards the end of the first episode of Big Little Lies, a witness to the murder around which the show centers, says, “It’s not the male grizzlies you gotta watch out for, it’s the sow.” My friend said to me the other day how much he hates when works of media go back and forth with a chorus of characters talking about some big event, like, “The thing you gotta understand about this town…” The HBO show, based on Liane Moriarty’s fun pulp novel of the same name, adapted by Ally McBeal’s David E. Kelley and directed by Jean-Marc Vallée of Wild and Dallas Buyers Club fame, features a lot of that device. But this use of it is different: males at least seem to be directly responsible for much of the actual violence throughout the episode, so that character’s comment directly contradicts the reality we’ve just seen, rather than reinforce it or tell you how to think about it. Big Little Lies is really into the marriage of apparent opposites: congenial and contemptuous, beautiful and ugly, loving and abusive, big and little.

Prestige drama shows for the past few years have had remarkably similar opening credits sequences, and I’ve been waiting for an exciting new credits sequence that changes the game and throws all the old conventions out. This isn’t that—the mood, tone, editing style, imagery and choice of foreboding light rock music, are similar to your True Detective, The Jinx, The Affair or Boardwalk Empire— but an unusual choice elevates it: the cast members walk up to the camera and vogue directly at it in a way that forces you to confront the characters’ complicity, even that of the creepily perfect children, in their world’s darkness.

Rich mom Madeline Martha Mackenzie (Reese Witherspoon) is taking her daughter to her first day of kindergarten when she decides to stop her car to scold some teens for texting and driving. One of the teens in the car is Abigail, Madeline’s daughter from a previous marriage. She trips on her heels and new-in-town young mother Jane, whom Shailene Woodley has decided to portray as half-asleep instead of nervous, checks on her and they strike up a friendship. The chorus of gossipy witnesses also introduces us to Madeline’s friend Celeste (Nicole Kidman) and her hunk husband Perry (Alexander Skarsgard), a couple who seem to have found some way to keep the passion in their relationship alive, as well as Madeline’s nemesis Renata, (Laura Dern) who just joined the board of PayPal.

Everything with these characters is simmering resentment, very low-key microaggressions, and secrets—there aren’t the big epic takedowns and glasses of water in the face one might be conditioned to expect from a story about rich housewives one-upping each other. It’s all very subtle, and for every dig, there’s a thousand self-deprecating remarks, concessions, and compliments—these are pros.

If you read the book, you might expect Witherspoon to play Celeste and Kidman to play Madeline, because Celeste projects the appearance of a relaxed, effortlessly beautiful friend while hiding a tough interior, a classic Witherspoon role, while Madeline is cold, commanding, and queenly—ideal for Kidman. The casting is perfect, though: how else could Madeline move through this world, bullying everyone, without being hugely likable like Witherspoon? And Kidman’s portrayal of Celeste reinforces the isolated and creepy nature of her relationship, which we’ll see shortly.

Bonnie, Madeline’s ex-husband’s new wife, tells Madeline that she has signed a petition to shut down the school’s production of “Avenue Q,” even though Madeline has worked hard on it. It’s implied that Bonnie and Abigail have bonded a great deal, to Madeline’s chagrin. Then, in front of the entire class and all the parents, Renata’s daughter, Amabella, accuses Jane’s son, Ziggy, of strangling her. Ziggy denies it.

Much of the middle section of the episode consists of the leads reflecting on what happened during the day: Madeline’s jealousy of Bonnie’s relationship with Abigail makes Madeline’s husband Ed (Adam Scott) feel like a “consolation prize.” Renata’s husband tries to put things in perspective for her as she looks out onto her stunning view and expresses an Ahab-like fury at things not going her way. Jane reassures Ziggy that he will make friends.

When Celeste tells Perry about the strangling incident, he forbids the boys from seeing Ziggy, and Celeste tells him he’s being ridiculous. He runs after her, grabs her by the arm and twists her around. She shoves him away.

Abigail gets Madeline to open up about her feelings regarding Abigail’s relationship with Bonnie. Abigail says, “I’ll always be your baby,” which is corny but also made me involuntarily tear up even though I was watching it at my friend’s house with him in the room! Something about a mom’s defenses breaking down, being insecure, I don’t know. Shut up!

A montage of the characters resting in their luxurious homes, juxtaposed with the murder investigation, and a few flashes of some other sinister stuff, plays the show out. The episode is graceful and kind of hypnotic, and its moments that seem to function in service of over-explanation or sentimentality inevitably end up subverted—just as in death, the easy and simple stories people tell about themselves to their kids, spouses, and communities can be revealed for what they really are. 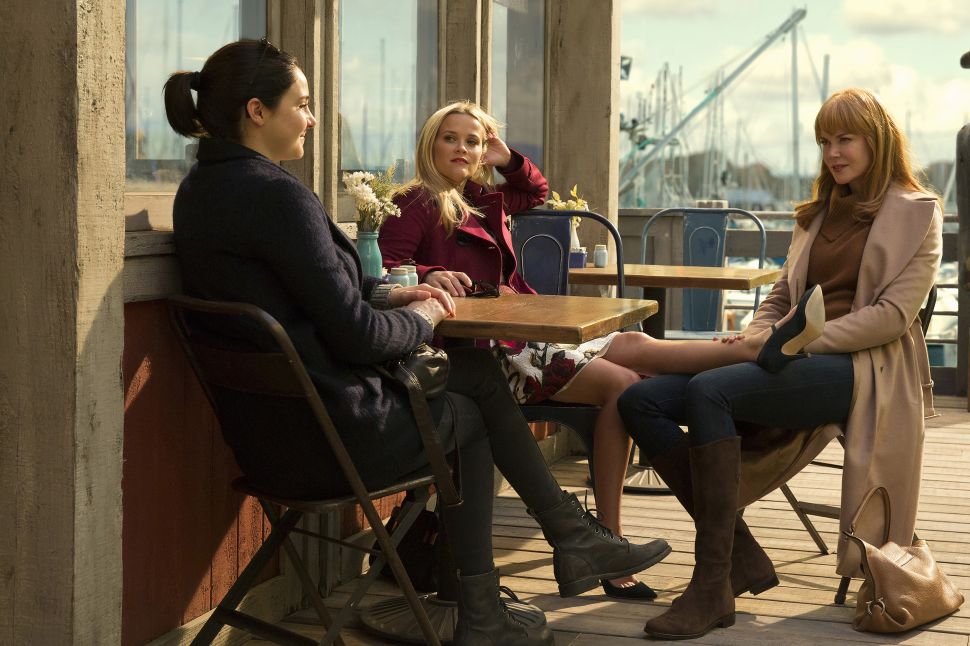