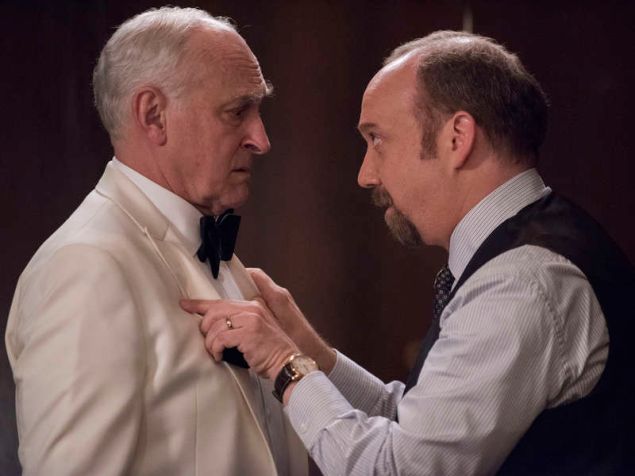 Suddenly, Billions is one of the most delightful fucking things on TV. Hey, don’t ask me, I just work here! But after two episodes including tonight’s rip-roarin’ “Dead Cat Bounce,” the show’s second season has turned the first outing’s (very) occasional flashes of wit and heat into a strobe light designed to trigger the pleasure center of your brain into some kind of awesome epilepsy. The schemes and plots are dizzying but perfectly constructed, the main characters are holding their own, the supporting players bring down the house, and the whole thing feels like almost a brand new show. It’s too soon to tell if this will be as big a turnaround as series like Halt and Catch Fire and The Leftovers experienced, and that may be an apples-to-oranges comparison anyway—they’re far more serious dramas, for one thing, and for another they were already on the upswing by their first season finales, while Billions stumbled through that particular finish line. But I’m enjoying pretty much every second of screentime, and it’s one of the young year’s most pleasant televised surprises (Warren Beatty and Faye Dunaway notwithstanding).

Any review of this week’s episode will want to lead with one of the fabulous new characters the show has introduced this season, and for good reason: They’re goddamn amazing. First up is Oliver Dake (Manhattan alum Christopher Denham), the buttoned-up attack-dog investigator in Apollo 13 cosplay sent by the Feds to take Chuck Rhoades down. This week he spars with both Chuck’s estranged wife Wendy and her ex-employer Bobby Axelrod, offering the latter immunity if he testifies that he paid $5 million to the former as a bribe for her husband. It’s a hoot to watch these two seasoned operators attempt to take the young hard-charger’s number: Wendy works him over regarding his marriage, while Bobby (in one of actor Damian Lewis’s most convincingly alpha moments) accuses him of only pretending to need his owlish eyeglasses. But his best moment is in the background, when he’s seen through the blinds of Chuck’s conference room as he assigns his three-amigos underlings Bryan, Kate, and Lonnie the task of finding a case big enough to make it impossible for the Attorney General to fire him. There’s Dake, the all-seeing eye, popping up and letting nothing slip past him. He’s the kind of guy who can say shit like “I can influence the vector of your future, Mr. Connerty, and you’d do well not to forget that” and make it sound like emerged from his own brain, not from a script the actor was forced to read.

Next up is Taylor, the Axe Cap intern who has what X-Men comics might refer to as omega-level powers of perception. Mere moments after asserting a preference for they/them/their pronouns, Taylor outshines their nominal superior, dudebro also-ran Mafee, in the eyes of Axelrod himself by utilizing a combination of rhetorical analysis, satellite imagery, and good old-fashioned spycraft to uncover a phony Chinese tech corporation behind recent business moves by Axe’s hedge-fund rival Todd Krakow (Danny Strong, another Italian-chef-finger-kiss addition to the cast). Their brilliant work earns them a million-dollar-a-year starting salary…which they bargain into a week-by-week deal in which the money is doled out hourly, 24/7/365. You don’t need the luscious lavender magic-hour lighting during this scene between Taylor and Bobby to let you know something magical is happening here.

Finally, wonderfully, fanfuckingtastically, there’s Dr. Gus. Boy oh boy, is there ever! Played by Broadway vet Marc Kudisch, this lunatic is a bow-legged, tiger-claw-necklace-wearing barbarian who replaces Wendy as Axe Cap’s in-house shrink by doing pretty much the opposite of everything she ever did. He barks at and berates his baffled clientele with purposefully perplexing questions like “Are you a hardass, badass, jackass, or no-ass?”, then shouting at them when they say “Sorry?” in response. “Replace sorry with ‘WHAT THE FUCK ARE YOU TRYING TO SAY?” he commands; “Holy FUCK do you people need what I do!” when they demur. “Should you be sharing this?” asks Wags, the man who got him the job, when the good doctor divulges that one of the employees hasn’t had sex in six months. “I’m not in the ‘should’ game,” he replies. “Welcome aboard, Gus,” Wags says in something like awe. This is a man who strides into any room like he’s the star of his own movie. He’s fucking perfect.

And where does this leave our old favorites? Glad you asked! Let’s start with Wags (David Costabile, magisterial as ever), whose oxycodone-snorting in episode one appears to be a precursor to some sort of personal crisis. He lies around on the floor of his office with a hand weight on his head, he chafes at being overridden by Axe’s majordomo Steph (Shaunette Renée Wilson, another newcomer), he lights up when tasked by his boss with expanding the company’s portfolio, and he melts down when a couple of young doofuses insult the skill of his favorite sushi chef. He does this all with his eyes and shifts in his tone of voice because David Costabile is a dang genius. Dr. Gus is impressed as hell by his Japanese-restaurant freakout (“YOUR EXPENSE ACCOUNTS DON’T ENTITLE YOU TO FUCK HIS ART UP THE ASS!”), but he also notes that a man like Mike Wagner shouldn’t be so easily riled by young pups.

Wags’ boss is sitting on top of the world by comparison. Dake’s mistaken belief that Wendy’s big payday was a payoff basically hand Chuck Rhoades to Axe on a silver platter, provided he’s willing to sell out his former friend and shrink in the process. (Forecast: unlikely.) With Taylor’s help, he deals a blow to Todd Krakow, though his rival swears revenge. He even winds up holding leverage over Lawrence Boyd (the great Eric Bogosian), the squeaky-clean god-emperor of Goldman Sachs stand-in Spartan-Ives, when Chuck goes after him to save his bacon with the feds.

And yeah, about that. When last we left Chuck, he was buried beneath an avalanche of 127 Axe-instigated lawsuits, plus Dake’s investigation, and seemed destined for the chopping block. Bryan Connerty refuses to participate at all, choosing instead to commiserate with his former professor and Axe’s current counselor Orrin Bach, while Lonnie and Kate do a delicate dance with a Wal-Mart manqué that goes nowhere. But by now his father Chuck Senior (a much-welcome Jeffrey DeMunn) has sussed out his separation with Wendy, leading in a roundabout way to her caring counsel that he make a 180 and try something totally new in his approach to his impending firing. So he targets the aforementioned Lawrence Boyd and Spartan-Ives, an ally of the administration, in a rapid-fire Kinks-soundtracked montage that forces the Attorney General to lay off lest she appears to fire him for the sake of a political pal. Chuck Rhoades triumphant: Who’d’a thunk it? Billions a blast: Who’d’a thunk that? 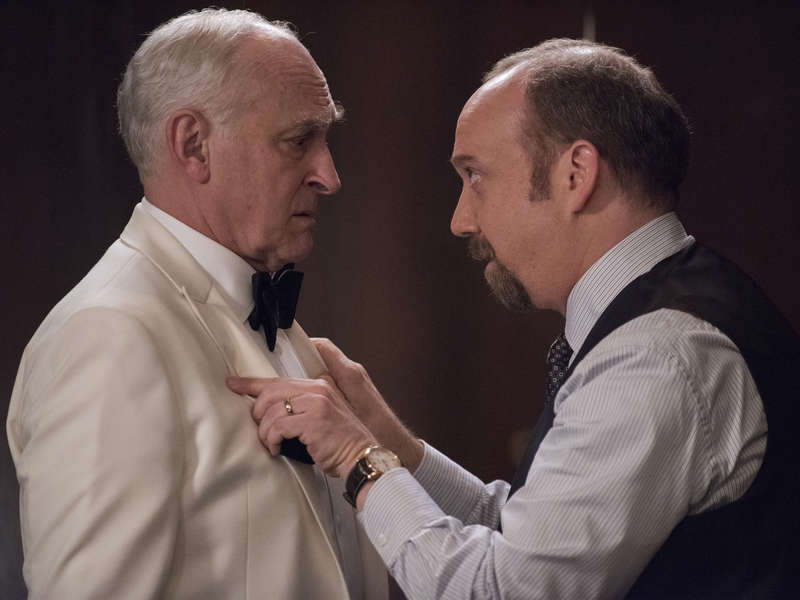