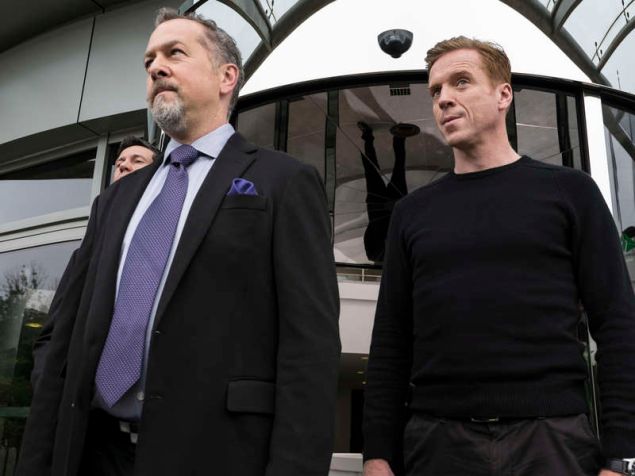 Billions and Breaking Bad have something in common. No, it isn’t just the wonderful twinkle-eyed actor David Costabile, so heartbreakingly hapless as Gale in the latter and so delightfully sleazy as Wags in the former. In several of its season premieres, Breaking Bad began by showing Walter White in some terrible jam: recording a farewell to his family as sirens close in, owning a pool strewn with scorched debris, stowing a freshly purchased machine gun in the trunk of his car. The question these cold opens posed was simple: How the hell is he gonna get out of this one?

“Risk Management,” Billions’ second season premiere, doesn’t play the flash-forward time-shift games that Vince Gilligan’s methamphetamine magnum opus did, beyond a inserting a “THREE DAYS EARLIER” tag following our opening glimpses of hedge-fund kingpin Bobby Axelrod mostly for effect. But it lands its protagonist, U.S. Attorney Chuck Rhoades, in a similarly inextricable predicament. By the end of the episode, he’s been slapped with 127 lawsuits simultaneously—all bankrolled by Bobby—while a government investigation has uncovered an apparent smoking gun in the form of Axelrod’s five-million-dollar payout to his wife Wendy the very day Rhoades dropped his own investigation into Axe Capital. Even as he meets with the federal judge with whom he quid-pro-quos to stay a step ahead of political turmoil, he gets the call from the Attorney General summoning him to Washington, where he’ll likely get the axe himself (no pun intended). As far as establishing stakes are concerned, Billions Season Two has come in hella high.

Fortunately, the quality of the episode has followed suit. Billions’ first season featured a stellar cast plucked from prestige-TV Valhalla that was simultaneously given both too much and too little to do: Schemes and storylines spidered out from the central Axe vs. Chuck conflict like crazy, but the byzantine plotting too often felt like padding and too rarely revealed reasons to care about any of the characters involved. This sucker, on the other hand? Drum-tight, high velocity, and fueled by each player’s most enjoyable attributes.

It’s been three weeks since we last saw our heroes Chuck and Bobby, shouting the show’s subtext at one another in the gutted offices of Axe Capital; superstar psychiatrist Wendy Rhoades had left her marriage with the former and her job with the latter, leaving both men at sea. Now Axe Cap is reopened for business, with tight new security procedures, personal supervision of all his conversations by his chief of staff Stephanie Reed (newcomer Shaunette Renée Wilson), and a battle plan devised by his dream team: attorney Orrin Bach (True Detective’s Glenn Fleshler), mononymed private investigator Hall (Oz’s Terry Kinney), and oxycodone-sniffing second-in-command Wags (Costabile, who really could not be more fun in this role).

At home, Bobby’s wife Lara (Malin Akerman, in a hardass role that too rarely utilizes her comedy chops) is taking command of the family life with just as sure and steely a hand, muscling out her kids’ school nurse in favor of her cousin and forcing her cop brother to reconcile with Axe following the revelation that he made his fortune from short-selling while the Twin Towers burned. Hell, even the Axe Cap the interns are promising, as Taylor (Orange Is the New Black’s Asia Kate Dillon), a buzzcutted butch brainiac with a vegan diet, makes clear in her striking debut.

Compared with this well-oiled machine, the office over which Chuck presides is a total trainwreck. His assistants Bryan, Kate, and Lonnie (Toby Leonard Moore, Condola Rashad, and Malachi Weir, each appropriately all-business) are preparing to jockey for a vacated position high up the food chain, potentially undermining Rhoades to get it. It turns out that while Bryan turned down Axe’s job offer at the end of last season, he tipped off the Office of Professional Responsibility to Chuck’s shady conduct in trying to take Bobby down; they send in a vicious young investigator named Oliver Dake (Christopher Denham), who moves like a predator and dresses like an also-ran accounts guy from Mad Men.

Rhoades’s home life is a comparative wreck as well. While his estranged wife Wendy (Maggie Siff, keen and confident and blessed with a spit-take-worthy silhouette) fends off job offers from hedge-funders new (Todd Krakow, a creep played by writer-actor Danny Strong with a deliciously obnoxious rich-guy accent) and old (Axe, who sneaks into her private practice under an assumed name), Chuck’s left to bark at her fruitlessly over her failure to disclose her seven-figure payout during a brief encounter in the kitchen as they swap custody of their kids. In this light, the one-two punch that fells him in his final scene feels all but inevitable.

Clearly there’s a lot of ground to cover, and in the past this would have led to some herky-jerky storytelling rhythms. But director Reed Morano (soon to helm Hulu’s adaptation of The Handmaid’s Tale) and writers/co-creators Brian Koppelman and David Levien establish their intentions early on, with a typically shameless swipe of Harry Nilsson’s propulsive “Jump Into the Fire” from GoodFellas’ coked-out arrest-day sequence—it’s all about forward momentum, keeping you leaning forward from one scene into the next to see how it all adds up. And it works.

As an aside, Billions has a mixed-bag history with movie references. Sometimes it feels like borrowing from better work to score extra points, other times like an accurate reflection of these characters’ delusions of badass grandeur. The Nilsson music cue is a bit much for my taste, but a pair of in-story quotes—an Axe Cap underling drops a line from The Godfather Part II, while Rob Morrow’s smarmy Judge DeGiulio quotes Hamilton, as self-satisfied politicos are wont to do—work well in their respective contexts. Better still is a technique cribbed from The Silence of the Lambs during Dake’s interrogation of Bryan, shot in close-ups of their faces: Like Hannibal Lecter, Dake stares directly into the camera, while his quarry’s eyeline is slightly off center, wordlessly establishing the power differential at play. It’s the cinematographic equivalent of Axe holding a meeting with his lawyer at a racetrack in the middle of the night, paying a driver and horse to trot around under the lights just to show that he can. Billions, too, is off to the races. 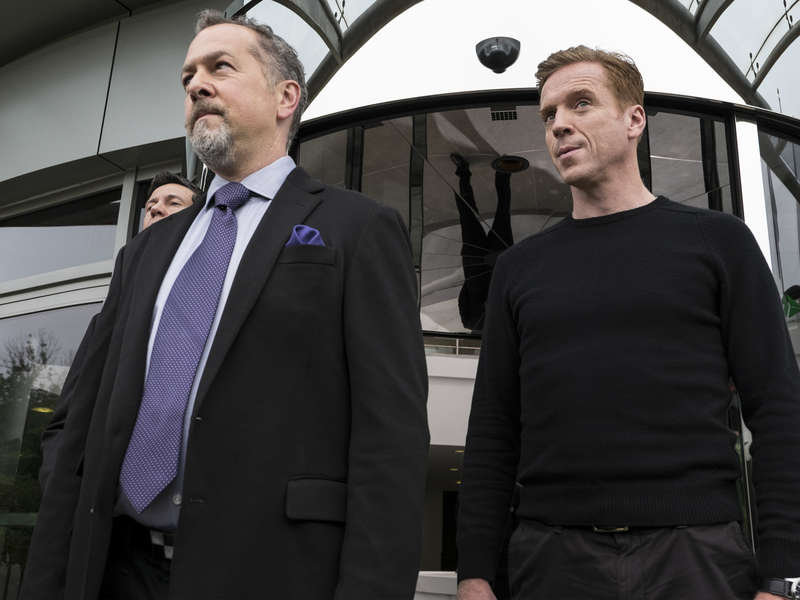