Few destinations provide the perfect recipe for romance like that of a ski town in high-season. Pristine powder runs by day make way for après-ski revelry, followed by soothing sore muscles in the nearest hot tub, and retiring to a woodsy and oversized suite.

What more could you want?

And don’t forget that the combination of sub-freezing temperatures, thin air, and wood-burning fireplaces are the ultimate aphrodisiac.

Dining in the alpine was perfected in the valleys of Austria and Switzerland as a way to simply provide sustenance. Ingredients were foraged from the outdoors and consisted of little more than the meat raised on your farm, eggs, bread, cream and cheese. Delicious, right? Staples such as fondue, spatzle, wienerschnitzel and gröstl all have remarkably few ingredients. Flash forward a few hundred years to Austria’s Oetzel Valley, where the Ice Q restaurant is located 1.89 miles above sea level in the town of Solden (you might recognize it from the most recent James Bond film Spectre). The four story glass cube is accessible only by one of the most advanced cablecar systems ever imagined. Head chef Patrick Schnedl’s ‘Summit Dinner’ series takes fine dining to new heights (literally) with Alpine delicacies every Wednesday, accompanied by live music under the stars.

Halfway across the world, it took decades to perfect the art of high-end cuisine at North American resorts. A sea-level staple like LA’s Matsuhisa has been part of the Aspen scene for years, but it’s the spots that are truly homegrown and unique that send the heart aflutter.

Colorado’s bounty expresses itself in many unique ways, each reflective of the resort. In high-end Beaver Creek there is only one choice for a romantic getaway, Beano’s Cabin. After a snowcat-drawn sleigh pulls you up Beaver Creek’s pristine slopes you are transported to an early 20th century trapper’s lodge, complete with wood-burning fireplace and live musicians. The menu is hearty, so come hungry; the Berkshire Pork Porterhouse with Heirloom grits can’t be missed. A few miles away in Vail, Sweet Basil is the anti-Beano’s: modern, trendy, and convenient. Right in the heart of Vail Village, you could miss it if you aren’t looking closely. They’ve been serving up quintessential nouveau American cuisine for nearly five decades, with dishes like Colorado Lamb Loin and Palmetto Farm Young Chicken. It all equals what was voted in Zagat as “Colorado’s Most Popular Restaurant.”

Over in Aspen and Snowmass, traditionally known for ritzy fine dining, two romantic enclaves take the cake. Since 1997 Jimmy Yeager’s aptly named Jimmy’s has hit its stride on key staples. So much so that any time Yeager has even thought about taking signature classics like crab cakes and meatloaf off the menu, the customers revolt. The atmosphere is frenetic and clubby. Start the evening off with cocktails and wait for the dining room to open. For some fun, Jimmy’s also offers a wine challenge: ace the blind taste test and your glass is on the house.

In Snowmass, The Viceroy’s Eight K serves up southern-rooted cuisine with high-altitude flair. Watch Executive Chef Will Nolan orchestrate the evening in the central display kitchen while seated at an 87 foot long glass bar. For Valentine’s Day, a special menu featuring Veal Milanese & Lump Crab saffron pasta with broccoli rabe and thyme jus is the order to get.

Continuing west across the state to Telluride, 10,551 feet atop the Southern San Juan Mountains, lies Allred’s. This hot spot is accessible only via the village gondola, which explains the breathtaking and romantic views overlooking the lights from Telluride below. Born and trained in Italy, Executive Chef Mike Regrut put the restaurant on the culinary map with innovative, contemporary American Cuisine that is locally sourced and a wine list that is the most robust in the region.

The Rest of the West: CALIFORNIA, UTAH, WYOMING

Outside of Colorado’s high concentration of fine dining, the ski areas of Tahoe, Park City and Jackson Hole all have their unique spin on romantic options. In one of the nation’s oldest ski areas, Squaw Valley’s PlumpJack Inn was originally built as housing for the 1960 Winter Olympic delegation. With slope-side access at the foot of the Sierra Nevadas and North Lake Tahoe as the backdrop, Executive Chef Jack Connell creates seasonal menus unique to the area.

As the Sundance Film Festival came to prominence over the past decade in Park City, Main Street’s culinary scene had to mature accordingly. Longtime favorites, like Asian-infused Wahso and southwestern Chimayo, are as good as ever, but this season’s newcomer Firewood was the festival’s table to get. Chef John Murcko evokes all five senses cooking local ingredients over a wood-burning hearth in a turn of the 20th century ambiance.

Jackson Hole, which has seen a record snowfall this year, has had a steady tear of buzzy restaurant openings in the last few years, many under the watchful eye of restaurateur Gavin Fine. Fine came on the scene as an East Coast transplant in the ’90s, and transformed the Jackson dining scene when he and Executive Chef Eric Greenwood opened Rendezvous Bistro, his flagship, in 2001. Specializing in French and American dishes, “The Bistro” as it is eponymously known, is the standard bearer in the Tetons. Cozy, quaint, and hospitable, it caters to locals and tourists alike.

Representing the East Coast, Stowe Mountain Lodge is nestled in northern Vermont’s Green Mountains at the base of Stowe Mountain Resort. Within resides Solstice, offering a casual yet refined experience under the helm of Executive Chef Ronnie Sanchez (and his three Michelin stars) who trained at famed El Bulli before stints in Aspen/Snowmass and Kauai. The atmosphere and ever-changing menu are true to the rustic charm of the area and ingredients are fresh, locally sourced, and mostly organic.

Took a sleigh to Dinner at one of my favorite places on earth, and now I get to howl at the moon- what more could I ask for? Maybe some fresh powder for the weekend, please and thank you Ullr. #beavercreek #peaveinthebeave #powchickapowpow #nofilter #allskiskiski #wanderlust

Head to Mr. Luxury Ski for even more alpine options of all sorts. 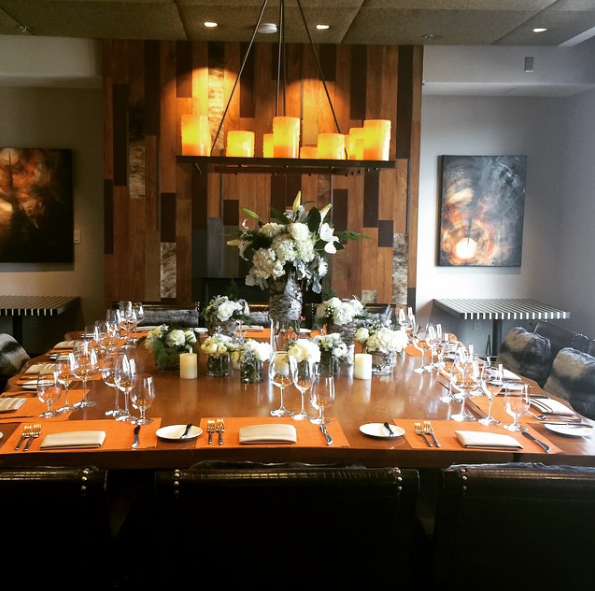