KENNEDY SPACE CENTER, FL—Elon Musk and his private spaceflight company SpaceX have taken yet another step toward Mars on Sunday by launching their first mission from NASA’s historic Launch Complex 39A at Kennedy Space Center. The site previously saw the liftoff of Apollo 11 in 1969, which carried humanity’s first moon walkers. Sunday morning, it was used by SpaceX to launch its Dragon cargo spacecraft toward the International Space Station.

About ten minutes after the 9:39 AM ET liftoff of the Falcon 9 and delivery of the Dragon to its preliminary orbit, the rocket’s booster detached and flew home for a vertical touchdown on Landing Zone 1 at Cape Canaveral Air Force Station. This is now the third time SpaceX has recovered the Falcon 9 with a landing on the ground. SpaceX has also successfully returned the Falcon 9 booster multiple times on its autonomous drone ships off the coasts of both Florida and California, making this the eighth recovery overall.

As for the Dragon, the spacecraft will fire its thrusters and maneuver with 5,500 lbs of cargo to the space station on a trip that will last two days. This is the 10th resupply service mission SpaceX is facilitating for NASA as part of a lucrative commercial contract to deliver supplies, science experiments and hardware to the orbiting laboratory. SpaceX will also take on the task of ferrying NASA’s astronauts to the space station in a Dragon capsule modified for human transport as part of a commercial crew contract. Those missions, which are a couple of years away still, will return human spaceflight to American soil and end NASA’s dependence on the Russians for a lift to orbit.

While this particular cargo run seems relatively routine, the events set a stage for what the space industry is becoming: commercial enterprise. Not since the retirement of the space shuttle in 2011 has Kennedy Space Center hosted a rocket launch of any kind. Launch Complex 39A hosted the liftoff of Neil Armstrong and Buzz Aldrin toward the Moon and later saw shuttle launches to construct the Hubble Telescope and International Space Station. The pad would be “rusting away if not for SpaceX,” according to the center’s Director and decorated astronaut, Bob Cabana.

SpaceX leased Launch Complex 39A from NASA in 2014 and has been refurbishing the site to accommodate launches of the Falcon 9 and the firm’s upcoming Falcon Heavy rocket, which CEO Elon Musk claims will be the most powerful in operation by an “order of two.” The Falcon Heavy will have the deep space capability to launch another variant of the Dragon spacecraft (dubbed “Red Dragon”) toward Mars, and SpaceX will use these missions to establish a cargo route in advance of the company’s first human flights to the red planet.

SpaceX hopes to begin colonizing Mars by the late 2020’s, launching a massive spaceship called the Interplanetary Transport System (ITS) with humanity’s first space-faring settlers from the very site of Sunday morning’s cargo liftoff—Launch Complex 39A. The event will certainly mirror the moon walking history of the pad, especially if SpaceX becomes the first to attempt such a mission.

Elon Musk’s vision for making human multi-planetary rests on SpaceX’s ability to make space travel cheap and sustainable. This is why it’s so important that the Hawthorne, California-based rocket provider recover each Falcon 9 booster after delivering payloads to orbit.

Disposing of a rocket after using it just once drastically increases the costs of orbital missions. In a month, SpaceX will for the first time, attempt to fly one of its “flight-proven” orbital rockets recovered from another mission—a feat never accomplished in the aerospace industry. SpaceX will also attempt to reuse a previous Dragon spacecraft on the very next resupply run to the space station for NASA. Reusability is integral to not only the financing of humanity’s expansion into the solar system, but integral to the architecture of SpaceX’s vision of building a city on Mars.

In a little over a decade, Launch Complex 39A will be occupied by larger-than-life ITS Interplanetary Transport System, which was built on the basis of reusability. The space liner’s giant booster will lift off with the crew ship from the historic launch pad and deliver it to a parking orbit where it will wait for what SpaceX hopes will become a routine operation by then: the quick return and reflight of the rocket’s booster.

After safely landing at back at the spaceport, SpaceX will attach a fuel tanker to the booster and launch again to orbit where the second spacecraft will dock with the crew ship so that it may top off its fuel. The booster may have to fly home multiple times to deliver the necessary fuel needed for the journey.

The first launch of the ITS will be uncrewed and carry the necessary hardware and equipment to build a fuel processing facility on the Martian surface. The second mission will carry more cargo, along with the humans who will help build those first facilities and begin the long process of colonizing the world. The fueling facility will enable SpaceX to reuse the Interplanetary Transport System to bring home crew members and one day, venture out to further destinations in the Solar System. 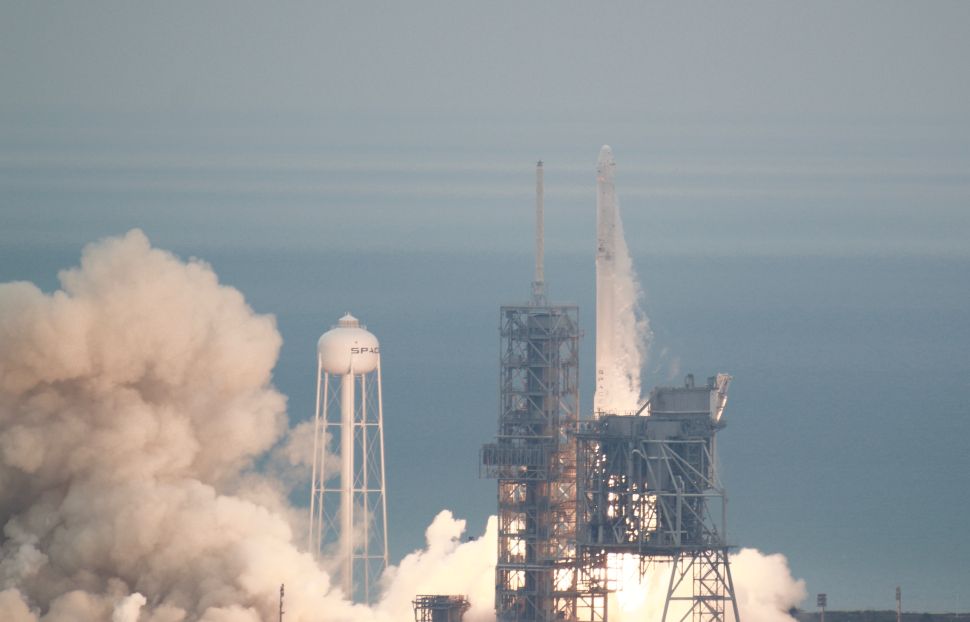