Bohemian bad boy of Breitbart Milo Yiannopoulos’ career had long been a testimonial to the notion that there’s no such thing as negative press. But this changed yesterday when attention was focused on comments he made advocating what one might call “situational pederasty.” Yet perhaps most damning is not what he said but what he didn’t.

Yiannopoulos failed to report child sex abuse so extreme that he himself said it “beggared belief.”

The admission was made in a 2015 interview with comedian and commentator Joe Rogan. At 4:46 in the video found here, the openly-homosexual Yiannopoulos explains how he attended the “boat parties” and “house parties” of Hollywood figures of the stature of film producer Bryan Singer (who has been accused of minor sex abuse). At these events, grown men were using for sex boys who were, as Yiannopoulos puts it, “very young—very young.”

Note that Yiannopoulos had just outlined how he’d been abused by a clergyman when he was 13 or 14, but nonetheless described his abuser as a “great priest.” He said in another YouTube video that sexual relationships “between younger boys and older men…can be hugely positive experiences,” as he discussed “the merits of gay relationships between adults and boys as young as 13,” as the BBC put it.

So how young were the boys at the Hollywood parties if they, even in Yiannopoulos’s eyes, “beggared belief”? Twelve? Eleven? He doesn’t say.

He also won’t say who the abusers were, telling Rogan, “I don’t want to be indiscreet about specific people because I think it’s going to be, yeah, dangerous.”

So, see something, say nothing?

We’ve witnessed this before. Lord of the Rings star and famed child actor Elijah Wood said in 2016 that pedophilia is rampant in Hollywood. So did former Little House on the Prairie star Allison Arngrim, who stated that she was actually the victim of Tinseltown child sexual abuse. Corey Feldman, a highly successful 1980s child actor, claimed likewise. He even says he went to the police more than 20 years ago and identified his abusers, but they did nothing.

As for not naming and shaming publicly, Feldman echoed Yiannopoulos, alluding to the idea that doing so would be dangerous. What are they afraid of? Lawsuits? Career destruction in certain cases? Whatever is stilling their tongues, the issue is the destruction of young lives, something that continues when pedophiles aren’t brought to light and justice.

Moreover, isn’t Yiannopoulos’ case vaguely similar to what destroyed famed Penn State football coach Joe Paterno? It was revealed in 2011 that Paterno had known that his college-football defensive coordinator, Jerry Sandusky, had long been abusing young boys. While guilty of no criminality himself, it was determined that Paterno hadn’t done enough to stop the abuse, and his career and reputation were ruined.

Of course, Yiannopoulos’ situation isn’t exactly the same. He was in his early 20s when witnessing powerful Hollywood types doing what “beggared belief” (though he’s more mature now and still won’t out the pedophiles), while Paterno was an older man turning a blind eye to abuse by an underling. Nor is such silence unusual, as pedophilia’s largely hidden history attests.

Yet a certain apocryphal saying could occur to one here: “Moral issues are always complex matters—for people who have no principles.” If Yiannopoulos hadn’t been reveling in his post-pubescent, “predatory” sexual activity with an adult—and theorizing about how other select young boys could similarly “discover” themselves via pederastic abuse—perhaps what he’d witnessed would have spurred him to action.

So maybe it’s a testimonial to poet William Blake’s observation that “the eye altering alters all.” Whatever the case, the revelations concerning Yiannopoulos’ remarks appear to have irrevocably altered his career, with CPAC cancelling his planned speech, a publisher nixing a $250K book deal and Breitbart workers threatening to quit if he isn’t sacked.

It’s perhaps the first time the man who has proudly branded himself a “dangerous faggot” has found that, at least on occasion, being outrageous can even be dangerous to oneself. 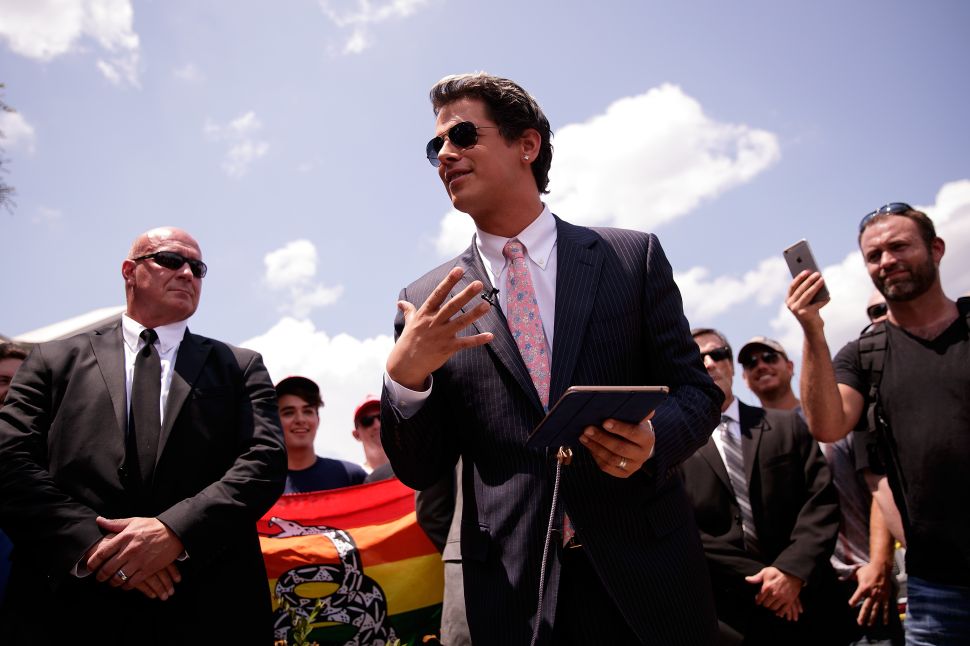