Bronx Congressman Eliot Engel capitalized upon the resignation of President Donald Trump‘s Russian-tainted National Security Advisor to push legislation that would hit Moscow and its agents with even tougher financial sanctions.

Lieutenant General Michael Flynn abdicated his post last night with the admission that he spoken in December with Russian Ambassador Kislyak about eliminating the strictures President Barack Obama laid against the country for its campaign of pro-Trump hacking during last year’s election—and that he, Flynn, had misinformed Vice President Mike Pence about the content of those conversations. Since it occurred during Obama’s tenure in office, Flynn’s conversation with Kislyak could constitute a federal crime under the Logan Act, which forbids private citizens from engaging in negotiations with hostile foreign powers.

Engel, the ranking Democrat on the Republican-controlled House’s Committee on Foreign Affairs, noted that Flynn’s confession marks just the latest shadowy exchange between Trump’s inner circle and the highest echelons of the Kremlin.

“Far too many questions remain unanswered about this administration’s ties to Russia,” Engel said in a statement, calling for broader and more comprehensive probe of the president’s Russian connections than Republicans have yet agreed to. “We know Putin was working to tip the scales in President Trump’s favor. We need a thorough, bipartisan investigation to get the complete picture of Russia’s interference in our election.”

Trump’s campaign manager, Paul Manafort, resigned in August after reports arose that he had received illegal payments from the deposed, Russian-aligned regime of Ukrainian Viktor Yanukovych to lobby the United States government. The Manafort scandal came weeks after the site Wikileaks published reams of emails pilfered from the accounts of the Democratic National Committee, which suggested to some that the organization had unfairly favored Hillary Clinton over Vermont Sen. Bernie Sanders in the primary.

In the months that followed, the site published hundreds more emails hacked from the account of Clinton campaign chairman John Podesta. The intelligence community concluded that Russian operatives acting at the behest of strongman Vladimir Putin were behind both online invasions, and Obama penalized the country by evicting scores of its citizens from U.S. soil, closing two of its compounds and introducing new sanctions against its spy networks.

Engel argued the answer now is to penalize Moscow even further—with his Safeguard Our Elections and Combat Unlawful Interference in Our Democracy Act, which he unveiled yesterday, hours before Flynn’s resignation. The bill would require the State Department to revoke or refuse visas for any foreign national implicated in compromising the American election, and to freeze the U.S. assets of any individual or entity that took part in such a conspiracy.

“Our intelligence and law enforcement communities are unanimous in their assessment that Russia worked to rig our election. This is an attack on our country, and it cannot go unanswered,” Engel said in a statement, warning of a repetition of last year’s foreign manipulation. “This bill would mete out tough penalties to those who tried to undermine our democracy, and it would put any other would-be meddlers on notice: stay out of our business or face the consequences.”

It is unclear whether the measure, which has 50 co-sponsors, stands any chance of passing the Republican-dominated House or Senate.

Trump has been consistently pro-Russia and pro-Putin since his early months as a candidate, and his recent defense of the Eurasian autocrat’s human rights abuses enraged and horrified even members of his own party. Unmentioned amid the fiasco surrounding Flynn was the privately-compiled dossier Arizona Sen. John McCain shared with the Federal Bureau of Investigation, which purported the existence of secret communication channels between the Trump campaign and the Russian government—and alleged that Putin’s agents possess a videotape of prostitutes urinating on a mattress in a Moscow hotel for Trump’s enjoyment, used for blackmail 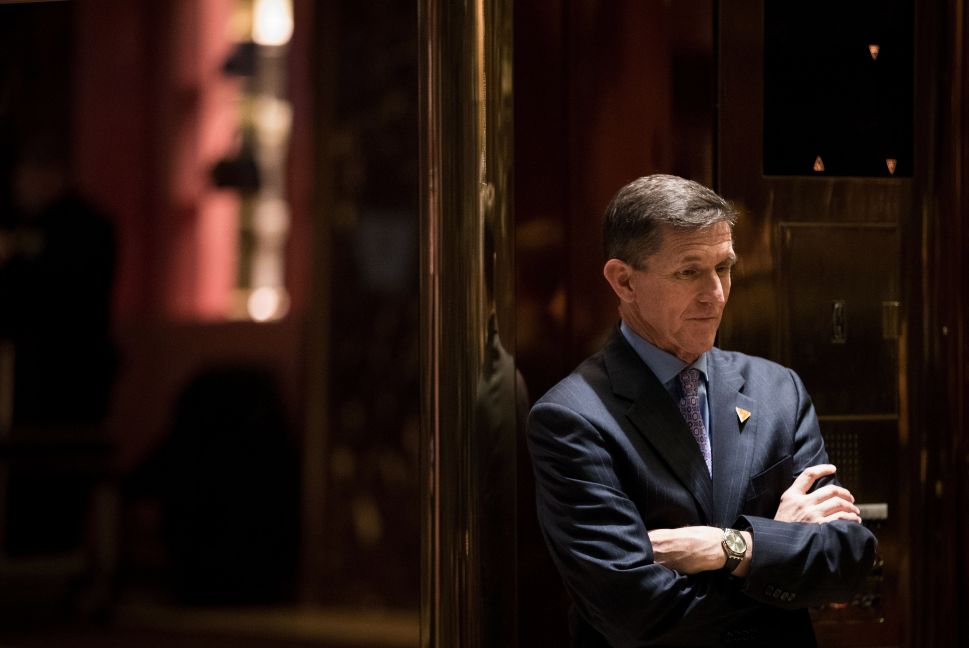