Mayor Bill de Blasio’s new commissioner for the Administration for Children’s Services unveiled a four-point plan to “fix what isn’t working” at the beleaguered agency—and said he’s looking forward to working hand in hand with a state-appointed independent monitor.

De Blasio formally announced that David Hansell, who previously served on the senior leadership team of the Department of Health and Human Services in former President Barack Obama’s administration, will start at the position in March. The announcement comes after ACS Commissioner Gladys Carrión resigned late last year following the deaths of several severely abused children—and after an order from the state that the city appoint an independent monitor to oversee the agency.

Hansell recalled his past five years as  managing director of financial advising firm KPMG, and his work as deputy executive director of Gay Men’s Health Crisis during the late 1980s and early 1990s.

“Since then, I’ve tried to apply those lessons in running government agencies, energizing them, spurring them to innovation and working to improve their performance,” Hansell said at a press conference at The Children’s Center today. “And now as I take on a new responsibility at ACS, the agency that I’m about to lead, is beholden to every single New Yorker in its mission to protect our most vulnerable children—and there’s no greater calling than that.”

Hansell said he plans to conduct a “top-to-bottom review” of ACS’ intervention services to determine which strategies are working, and ensure all top officials at the agency are working toward reform goals outlined under Carrión. He also said that he will review the “many recent proposals” to see what needs to be implemented, and determine where further changes are necessary.

“My job will be to build on what ACS is doing well, to fix what isn’t working and to move mountains to support the work of the agency’s 6,000 committed and courageous staff,” he continued. “And the mayor has assured me that I’ll have whatever resources I need to make sure that ACS can achieve its mission.”

Hansell’s appointment comes in the wake of three-year-old Jaden Jordan’s death in December, along with the killing of six-year-old Zymere Perkins less than three months before.

In the Jordan case, ACS claimed it only obtained his correct address the same day he was found covered in feces and with his skull cracked. But a Department of Investigation report released last month found that the agency had access to state databases with the boy’s location when it received a tip about his situation two days prior.

In the case of Perkins, the city fired three employees and suspended and demoted another six employees as it was discovered that there were five allegations abuse lodged against his mother and her boyfriend.

The de Blasio administration said that it has invested more than $122 billion in new funding to strengthen the child welfare system, and asserted that there are fewer than 10,000 children in foster care compared to 13,000 three years ago. It also said it has hired more than 600 new child protective specialists.

At the end of January, the state’s Office of Children and Family Services announced that a team from international investigations firm Kroll Associates, Inc.—led by former New York State Inspector General Joseph Spinelli—would serve as the monitor.

De Blasio said that he learned about working with monitors from former Police Commissioner Bill Bratton, pointing to monitors for the NYPD centered on the stop-and-frisk issue and for the Department of Corrections as examples of the benefits of having a “smart, effective monitor in place.”

“That’s what we expect to find here,” de Blasio said. “The commissioner’s gonna do his job but also consult with the monitor. I think it’ll be a collegial situation.”

Hansell said that the monitor presents an opportunity for the agency to find more ways to ameliorate its operations.

“I look at the monitor as a resource to help us understand what’s happening at ACS and how we can improve it,” he said. 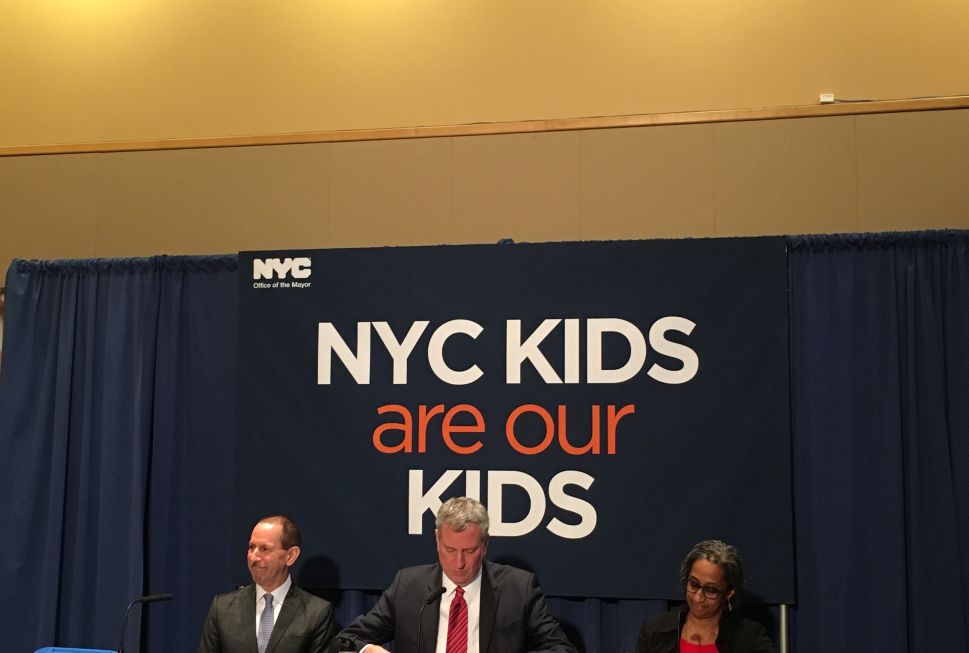