Yes! I am excited to announce that I am back in @si_swimsuit ..I figured with my gorgeous daughters @alexarayjoel and @sailorbrinkleycook by my side whose going to be looking at me! Oh and My kids think I walk on water, so let's not mention the apple box concealed just under the surface. For a preview check out @people.com ..and thank you Sports Illustrated for sending the powerful message that good things come in packages of every size and we do not come with an expiration date! 🌸🌴psI can’t wait to see everyone at VIBES on Feb 17th and 18th in Houston! #proudmomhere! #vibes

Christie Brinkley first appeared on the cover of Sports Illustrated Swimsuit Issue in 1979 and now, 38 years later, the supermodel proves she still has what it takes to make it onto the pages of the notoriously racy magazine.

However, this time around Brinkley is sharing the spotlight with two women who are very close to her heart: her two daughters. The 63-year-old mother poses alongside Alexa Ray Joel, 31, and Sailor Brinkley Cook, 18, all of whom are wearing skimpy black bikinis.

The trio of models shared the same image on Instagram, along with a few solo bikini shots. Each of the genetically blessed family members were unafraid of expressing their feelings about the shoot and what it was like to strip down in front of the camera.

“Thank you Sports Illustrated for sending the powerful message that good things come in packages of every size and we do not come with an expiration date!” wrote Brinkley.

Brinkley Cook, on the other hand, delved a bit deeper. “I’ve had issues with my body image since before I can even remember. I grew up not loving how I looked and felt held back because of it,” she wrote in a lengthy Instagram caption. “But recently I have been liberated. I am healthy, [I] treat myself well, and for that [I’m] happy. I’ve looked in the mirror and been able to LOVE the things about my body that beauty norms deem ‘undesirable’. I now have grown to know that my body is worthy of so many great things. I don’t need to be a size 0 to believe in myself.”

Joel, who is the daughter of Brinkley and Billy Joel also had an uplifting message to share. “This was a lesson in learning to let go, take the plunge, and embrace myself from both the inside AND out- which is something I struggle with each and every day. My purpose is to now pass along this lesson of unconditional self-love and self-respect to every woman who’s willing to listen,” she wrote on Instagram.

~'Twas a most humbling and rewarding honor to be a part of your February issue.🌹👑🖤 Thank you @si_swimsuit & @mj_day for making me feel so at home. This was a lesson in learning to let go, take the plunge, and embrace myself from both the inside AND out- which is something I struggle with each and every day. My purpose is to now pass along this lesson of unconditional self-love and self-respect to every woman who's willing to listen. Once again, from the bottom of my heart… Thank You.~

Sports Illustrated has been making waves over the past few years, by adding diversity to their swimwear shoots. Once reserved for stick thin models, the magazine has embraced a wider variety of body types, even putting plus-size model Ashley Graham on the cover of the 2016 issue. In addition to Graham, UFC fighter Ronda Rousey and model Hailey Clauson also graced the covers of last year’s issue, further straying from the stick thin model mentality.

The issue featuring the gorgeous trio of Brinkley and her daughters will hit newsstands on February 15. Other notable names in this year’s issue include the return of Chrissy Teigen, Hannah Ferguson and Clauson, in addition to first time appearances by Mia Kang, Danielle Herrington and 32-year-old Bianca Balti. 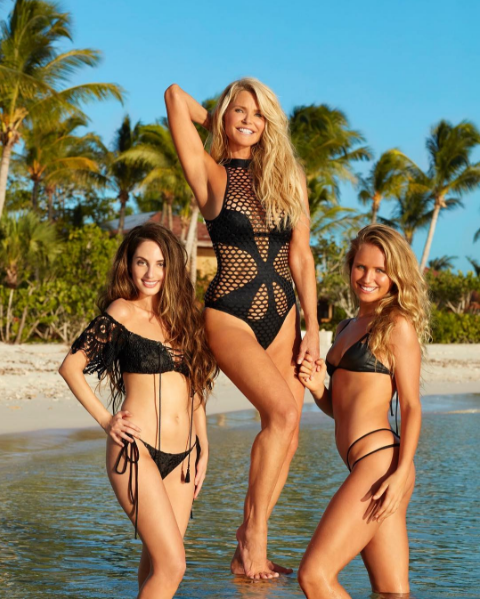