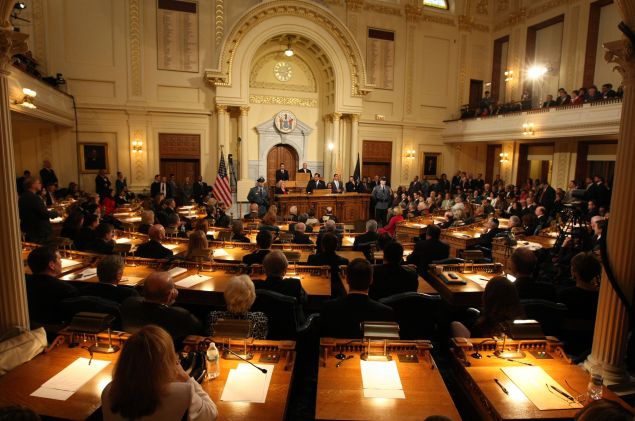 N.J. governor Chris Christie made one of his final bids to frame his economic legacy in the state Tuesday. PolitickerNJ

TRENTON — In his final annual budget address before the end of his term in 2018, New Jersey governor Chris Christie announced that he would not be pursuing his hard-line school funding proposal in his final months and touted his cooperation with state Democrats on making changes to the way the state makes payments to its sorely underfunded public pension system.

Christie took the opportunity to tout his cooperation with the opposing party on the state’s gas tax, moving to a quarterly rather than annual pension payment schedule and making a larger-than-expected payment this year.

Christie proposed “increasing the pension payment by $647 million over last year, to a $2.5 billion pension payment in FY18,” adding that “to provide some context, the combined contributions of Governors Whitman, DiFrancesco, McGreevey, Codey, and Corzine were $3.4 billion from 1995 through 2010.”

Christie said he would work with Democratic leadership in the State Senate and General Assembly to devise a solution to inequitable school funding as long as they take action within 100 days. Pundits have called his previous plan impracticable given strong Democratic majorities in both houses.

The move marks a change from the governor’s previous school funding plan, which would have leveled school funding statewide and offered equal funding to all school districts regardless of their tax base. While that plan would have presented a windfall to certain underfunded suburban districts, it would have more than halved many budgets in poorer cities like Camden and Newark.

“I pledge to work with the leaders of the legislature to come up with a new funding formula. Everything is on the table. No idea out of bounds for discussion. I am willing to work with you to solve this problem without any pre-conditions on the ideas brought to the table,” Christie said.

“But please be assured that if we do not do this in the next 100 days together, each branch will then be left to its own authority and its own devices to fix this problem on its own. I want to act with you. But, if forced, I will act alone. But it will be fixed before I leave this town.”

Christie also took aim at his potential Democratic and Republican successors, who he has repeatedly characterized as offering unrealistic campaign promises.

“We have sold and shuttered those thousands of government cubicles to try to insure that the 2009 promise of a smaller government made and kept to our taxpayers cannot be broken by a new administration swollen by frivolous election year promises,” he said to applause. “The people in this room are the only folks who may be able to spare the public the exploding tax rates which would inevitably come in the wake of someone actually trying to keep those election year fantasies.

“The public will not tolerate it and they will kick out those who do it. If you do not believe it, I refer you to our history books and the elections of 1991, 1993 and 2009. Past is prologue,” he said, alluding to years when tax hikes precipitated gubernatorial losses.