Before the circus of contemporary art begins next week, visit a circus at the Met.

Circus Sideshow, painted by Georges Seurat (1859-91)in 1888, depicts what the French called a parade, a stage where entertainers performed for free in order to attract audiences into a tent where they would pay for entertainment.

Those entertainers, the bait for those circuses, were calledsaltimbanques. The term comes from Italian, combining the words for jump and benches. The performers, usually costumed oddly and shabbily, included wrestlers, singers and dancers from the urban underclass. They were the wandering homeless, traveling on foot from fair to fair. As clowns had been for centuries, they were natural subjects for artists and satirists, happy or sad.

In a place like France where satirists took aim at everything, and cartoons were reproduced in the daily press, the result was a circus of images that no one, not even Georges Seurat, could escape.  In “Seurat’s Circus Sideshow”, the galleries downstairs at the Lehman Wing of the Met are filled with posters, caricatures and books. Nothing if not irreverent, Honore Daumier leads the pack.

But Seurat took a different approach. His version of this maelstrom of street theater was subdued, as were his paintings of workingmen lounging on a riverbank, and Parisian weekenders at leisure on the Grande Jatte, an island in the Seine.

Circus Sideshow, about three ft. by five ft., is even more subdued, so much so that only two of its figures can be identified. There is a swaggering circus master, the well-known Ferdinand Corfi in a formal tailcoat, and a youngish boy, the buffoon. A standing performer with a conical hat or hood holds a trombone. The other figures, who are spectators and musicians playing for the crowd, are slightly more than silhouettes, their faces illuminated by the tiny dots of light that Seurat used for color.

This is a picture of an event at night, seen from the perspective of someone in the crowd. Artificial illumination was a new thing, and Seurat, in his late twenties, had given himself a challenge of painting under conditions where light was either scarce or unnatural, or both.

But he achieved something more. By toning things down, Seurat gave the scene the feel of a ceremony. He also brought harmony to the kind of gathering where saltimbanques did anything to get passersby through the door. If your pocket wasn’t picked while you were waiting outside as the musicians played, the cost of a ticket and anything else inside would achieve the same result.

At the Met, we watch Seurat getting there. It’s a look at the paradox of Circus Sideshow.  While Seurat, like any artist, might have been attracted to the cocktail of color, movement and noise, he was also a painter of mute forms and subtle shades.  One of my favorites among the drawings is the ephemeral dusky Two Clowns, in which one performer extends his arm toward another, in what seems like an endorsement. Seurat shades the figures so faintly that we get what seems like the faded geometry of their relationship.

In another study, Seurat tries an unlikely mix of color and draws his figures (if draw is the word) in blue and green pulses on a gold background. It’s a dazzling detour, given the understatement hat he finally decided on.

One picture in the show that is sure to surprise anyone familiar with Seurat is Models (Les Poseuses) from 1887-88. The much larger version of this painting is in the Barnes Foundation in Philadelphia, but this small picture is close to identical. Three pale thin nude women are in a room, probably the painter’s studio. Seurat’s Grande Jatte is on one of the walls behind them.  The assumption is that they posed as figures for that other painting, verdant and elegant. Yet these unclothed models offer nothing seductive to the viewer, as their garments are strewn on the floor.  Models at the time tended to be poor girls who supplemented meager wages with prostitution. The scene is a deadpan observation of the distinction between art and life.

If Models wasn’t enough of an added attraction here, a study for the central figure of that painting hangs next to it.  The drawing of a teenage girl is as iconic as a statue from antiquity, but as immediate as an image of a working class Parisian from that time. Seurat tilted the head of that figure when he painted Models, and gave her a smirk, undercutting anything to beguile the viewer.

Another surprise in “Seurat’s Circus Sideshow”, which takes you through much of what else was happening in Paris at that time, is the grand Grimaces and Misery – The Saltimbanques by Fernand Pelez. More than 20 feet wide, the naturalistic painting went on view in 1888, the same year that Circus Sideshow was first shown.

The scene of performers standing on a stage at the entrance to a circus tent is a vivid one, but not a happy one. In the center are two clowns, one of whom is obscuring the sign that indicates the cost of entry. (The shadowy hooded trombonist in Seurat’s painting covers up a similar sign.) A dwarf sitting next to the clowns looks out despondently. On one side of the stage, musicians are ragged and exhausted. On the other side, children in skimpy costumes seem resigned to their boredom. The scene is painted with exactitude, but there is no life in its color. Show business is just a grim business for those who toil at this level of it. Toiling away at naturalism, Pelez connected with the sadness of his subjects.

Next to Grimaces and Misery, Seurat’s muted Circus Sideshow is radiant.

There is a photograph in the catalog of “Seurat’s Circus Sideshow” hanging in the Manhattan home of the collector Stephen Clark, who gave the picture to the Met after his death in 1960. The building on East 70thStreet is now the Explorers’ Club.  The picture was on a wall just above a roaring fire. It’s reassuring that the understated vision of Circus Sideshow is in a museum today.

“Seurat’s Circus Sideshow” is at the Metropolitan Museum of Art through May 29. 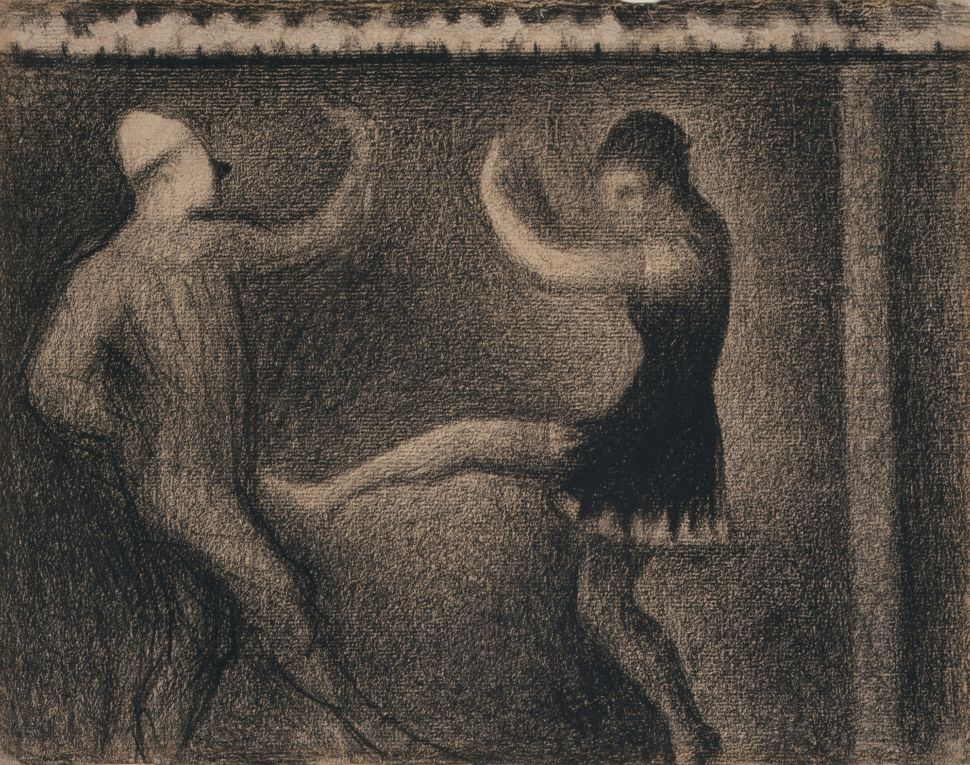