It’s assuring to see that the even in the post-apocalypse, the concept of crowdsourcing has survived. The buzzy internet-era method of gathering resources and information has been known to be highly effective. Now that we’re facing the End of the World Part II, it might be humanity’s only hope. At least that’s what the members of Skaicru are counting on this week, as Clarke makes the bold decision to tell her people that nuclear holocaust is only six months away and a little bit of elbow grease and the right attitude will make everything OK. Oh, and does anyone know a way to purify and pump into the Ark? Because that’s the only thing that’s going to save us. “I’m not stopping until we have a solution that saves everyone,” she tells Bellamy this week, intent on saving both Skaicru and Grounders without any further loss of life. But for Bellamy, and a near majority of The 100‘s central characters, there are more pressing things to worry about than a radiation-filled dust cloud that’s months away. And so, because Bellamy declares “We save who we can save today,” as this week’s mantra, I’m upgrading our gang’s Chances of Surviving Apocalypse to 12%—because saving a few people a day is good, but until everyone is ready to think big picture we’re still very much in the red.

This week, our gang is busy making baby steps toward what seems to be a decent temporary solution for saving a portion of the human population. Mount Weather is not an option, returning to space is definitely out, and shutting off the nuclear reactors which began melting down months ago is a no go. If only there were a place where everyone could ride out the radiation that was well-insulated enough to keep the bad air out and came with a self-sustaining life support system? Sounds a lot like the Ark! Only Skaicru’s former home in space (now crashed in sections on the ground) will need a lot of patching up, and a hydrogenerator for its supply. Everyone but Clarke and Jasper (we’ll get to him in a moment) head out to what’s left of Farm station in the Ice Nation to fetch the only surviving generator left on the ground. The catch: they’re urged to use extreme caution when removing it because it’s highly combustable.

Now to Jasper. Where do I even start? Every post-apocalypse story has that one character so overwhelmed by the cost of surviving that they’re nearly destroyed by it, but often such characters don’t survive more than a season before they either step back into the light or are totally consumed by darkness. Jasper has done neither—he’s just simply stuck around. And while he seems to have turned a corner this week, freed from his grief by the prospect of imminent death—he’s bathing in the drinking , singing terrible songs—I’m gauging this season’s success on its ability to revive Jasper and make him a vital member of Skaicru. He does, after all, inspire Clarke with a few words of wisdom, “Don’t you want us to survive Jasper?” she asks him. “No, I don’t want us to survive, I want us to live,” he says.

Meanwhile, over at Farm station, Bellamy and co. discover that the Ice Nation has moved in, and its keeping members of Skaicru and the other clans as slaves to power the landed space station. This leaves the group with a dilemma, the same one Bellamy expressed to Clarke at the beginning of the episode: do they take the hydrogenerator back to Arkadia and return later to free the slaves, or use it as a bomb and free them now. One option will save the many, while the other will only save a few and potentially damn everyone. And this where I just about yelled at the screen: they choose the few.

A central part of what has sustained The 100‘s gripping and socially relevant plot lines through the seasons is the way characters navigate the decisions that come with leadership, often trying not to repeat the mistakes of the past. Life on the Ark was hard, and it hinged on constant sacrifice for the greater good. Clarke and Lexa found common ground being leaders that valued human life above all else. Of all our characters, Jaha probably knows the burden’s of leadership best. We see him now struggling to find redemption, as well as a simple job sorting scrap, with the people he once lead as Chancellor. But while he’s basically been ostracized, he still makes a concerted effort to play the role of mentor to Clarke. “We make the best decisions we can with the information we have, and then hope there is a forgiving God,” he tells her, in a short but touching pep talk that reflects on his character’s many sins, among them killing Clarke’s father.

And while it’s admirable for Bellamy to buck tradition, and choose life today over the greater good, it comes with potentially devastating consequences. It goes without saying then that Bellamy’s decision to throw away Skaicru’s most viable option for surviving inside the Ark for a group that probably could have been saved by other means tomorrow does not go over well.

In case talk of past sins wasn’t enough, we’re given a disturbing visualization of the aftermath of Jaha’s sins, and Clarke’s, most recent actions in the episode’s cold open, which takes place moments before Clarke pulled the plug on A.L.I.E. A young boy murders members of his family one by one to try and convince his mother to take the chip and enter the City of Light. And then suddenly, A.L.I.E. is gone, the boy snaps out of it, and realizes that he’s killed everyone close to him for nothing.

The scene provides context for the Grounders’ anger with Skaicru, and their escalating plot for revenge. In Polis, a plan is gaining steam with members of Trishanakru, one of the other clans we’re meeting for the first time this season. Trishanakru’s ambassador decides to challenge Roan to single combat, hoping to kill him, gain control of Polis and ultimately take out Skaicru.

But Roan isn’t in any shape for battle, and still healing from the bullet he took to the chest. But convinced that opting out of the challenge will make him look weak, he accepts and recruits Echo to get him into shape, just giving her a chance to continue questioning his leadership decisions while kicking him around. Why does he want to rule the way Lexa did if it’s not what’s best for their people, she wonders. If Roan wants to earn the trust of the Grounders, he’ll have make some concessions, and so he tells Echo that he’ll let her go to Arkadia and investigate (after his fight with the ambassador) whether or not the threat of apocalypse is real or if Skaicru has fabricated it for their own gain.

But Roan never gets to go head-to-head with the ambassador. Despite Marcus’ plea to Trishanakru to respect the council and settle their scores with Skaicru and not the king, they won’t listen. “The time of skaicru is over,” he threatens. And so, Octavia (our budding assassin) kills the ambassador over dinner with a knife while saying with gusto “Long live the king,” and ends the immediate threat.

If Episode 2 tells us anything, it’s that this season will teeter totter between more immediate threats and the more scary, abstract threat of the end of the world. It’s a welcome return to what drove the show in its first season: the pressing danger of everyone dying in space, and the day-to-day dangers of the 100 delinquents on the ground. Only this time, the delinquents are calling the shots. “I’m not the chief,” Raven tells Clarke, fretting over the tall task of securing the Ark for yet another population of humanity’s refugees. “And I’m not the chancellor, but here we are,” Clarke says. Let’s hope they’ll make better decisions than their elders did—and just maybe more people will live this time around.

It’s crazy that the Ice Nation is less than a day’s drive from Arkadia, and the climate difference is as different as the Yukon is to the Florida coast. I guess climate change is just a side-effect of the post-apocalypse, and not the cause. That’s reassuring.

I could do without Abby and Marcus’ extended love story. Just saying.

Has anyone noticed Octavia has acquired some amazing tattoos? 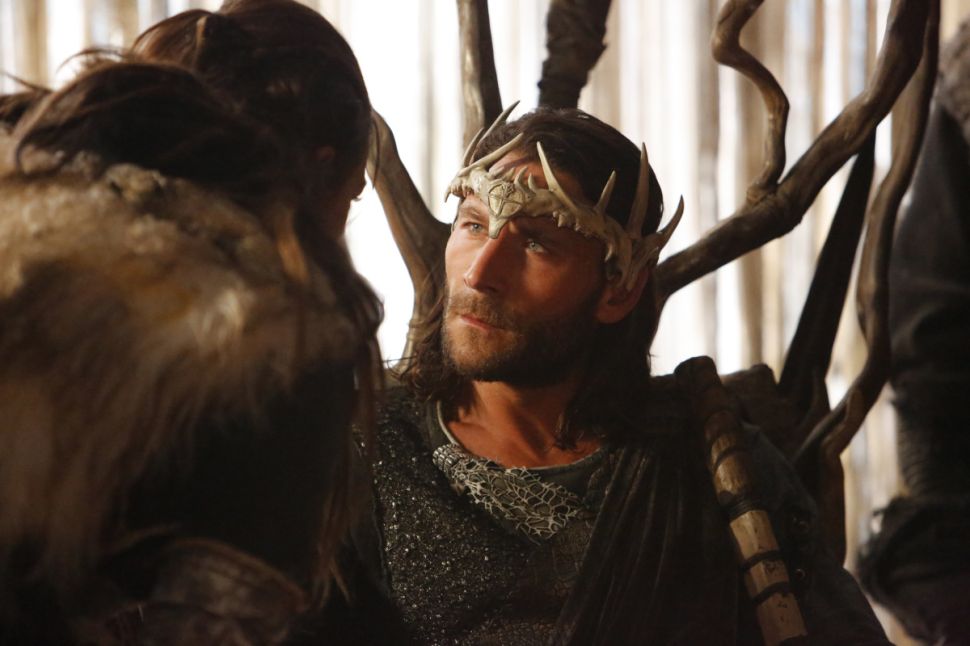