Four seasons ago, we began our story with 100 delinquents sent to die on a seemingly inhospitable Earth, and now it’s looking more and more like the only way to save humanity a second time is with yet another 100 lucky chosen. I see what the show’s writers are doing here, and it’s a clever circle back to what made Season 1 so riveting, even nail-biting, at times. However, choosing 100 people to ride out the radiation wave in the Ark does mean hundreds more will have to die, and that’s an unprecedented sacrifice for our remaining delinquents to shoulder. Remember that the first time The 100 went this route, the decision to narrow the future of the human race down by means of involuntary sacrifice was not up to the delinquents, but rather their elders. “You still have hope?” Clarke tearfully asks Bellamy, as she adds the final names to the list of 100 people that will get to live. Our ever-hopeful heroine, who has been the show’s only consistent voice of optimism for all four seasons, is understandably at her breaking point. “We still breathing?” he replies. This week, as the window for slapping together a viable plan for a Hail Mary solution is sped up to just two months—animal species are already beginning to die off and people are starting to experience acute radiation poisoning—our characters make a bold decision to put off their work readying the Ark and preparing the next 100 survivors, and they double down on hope.

With the doomsday clock suddenly much closer to Midnight, Skaicru is busy working nonstop to patch up the Ark, and Raven is starting to rationing food—a harsh routine that’s familiar to everyone from the days of living in space. Starting to feel the pressure (and burden) of leadership herself, Raven takes every opportunity to nag Clarke about making a list of the people who will be given chosen spots on the Ark. “Choosing who gets to live or die is your specialty,” she says. There’s hard evidence that black rain and mounting food shortages will begin imminently, and Raven wants to start hashing out protocols for when the shit starts to hit the fan.

Amid their abstract discussions about the warning signs of apocalypse, their worst fears arrive earlier than expected at Arkadia’s gates: Trikru’s healer Nyko arrives with Luna and some of her people in tow, who are all showing symptoms of acute radiation sickness. The good news: it’s not from the air. The bad news: they’ve become sick from eating radiated fish, and the only way to save them would mean using nearly a quarter of the radiation med supply.

While everyone’s occupied with Ark work, Jaha (who is taking every opportunity to remind Clarke and Bellamy that he has previous leadership experience) decides that taking a day off to go scouting for a doomsday bunker that may or may not exist is well worth the risk. While all the government bunkers in the area are either destroyed or too damaged to be of use, he believes a doomsday cult called the Second Dawn may have built an underground safe hold that could hold thousands. Since hope is the name of the game this week, Clarke and Bellamy decide to go all in—anything is better than having to make the list.

But the bunker winds up being a dead end, and a reminder to our gang that hope can only get your so far. However, the adventure does provide Jaha the opportunity to give Bellamy a pep talk about forgiveness, and dole out praise for being a support system for Clarke. And a rusted marker found on one of the cult’s dead followers contains this season’s fiery mantra: From the Ashes We Will Rise.

Meanwhile, in Polis, social upheaval is currently the greatest threat to humanity. The flame has been stolen. You’d think, that besides ruling and whatnot, safeguarding the literal key to the throne would priority #1 for Roan. But only days into the job, and he’s already misplaced the most sacred culture object his people have. He recruits Octavia to track down the alleged thief, the newly appointed Flamekeeper. (He also tells us that Octavia has earned herself a badass nickname on the street: Skairipa, translated from Trigedasleng to Death from Above.)

To find the Flame, Octavia must navigate angry mobs of Grounders that have taken over the city to destroy what remaining tech is left, so that it can’t “take over our minds again,” according to Ilan. Finally, in the temple, she intercepts the new Flamekeeper, and surprise! It’s Indra’s daughter, Gaia. After a brief family spat, they have only moments to come up with a plan to keep Gaia alive (Roan will want her head), Roan on the throne (without the Flame his power is weak) and the Flame safe from the tech-smashers, who are knocking down the temple door. They break in, snatch the Flame from Gaia, and in one gut-wrenching close-up Ilan smashes it to dust. Or at least he thinks he has—Octavia cleverly swapped the real Flame for a look-alike that Gaia wears around her neck. To complete the scheme, and let Gaia flee safely away with the Flame, Octavia brings Roan the head of one of the Grounders and tells him the Flame was destroyed. “People fell in line behind the flame, and now they’ll fall in line behind the sword,” she tells him. “Let’s hope Clarke finds a way to save us before more people have to die,” he says. As in Arkadia, in Polis everything is hinging on hope.

The doomsday bunker a bust, and the dreaded list finally complete, Clarke and Bellamy brace themselves for what’s ahead: more hard work on the Ark, and cross our fingers maybe a divine intervention from the Gods? It’s uncertain if they get exactly what they hoped for, but they do get something: all but one of the Boat people die from radiation sickness—but not Luna. The last of the nightbloods, her body rejects the radiation and she’s beginning to look like she’ll make a full recovery. The science behind this becomes clear if we refresh ourselves with the story of A.L.I.E.’s creator, Becca, who injected herself with a black substance so that her body would be compatible with the Flame—the same Flame that the nightblood commanders have carried around in their necks for generations. And when Becca escaped her lab in space to save A.L.I.E. and landed on Earth, which was still ravaged by the apocalypse she inadvertently sparked by creating the AI in the first place, her body was unaffected. The lightbulbs go off for Clarke, and she leaves us with the Second Dawn’s catchphrase again: From the Ashes We Will Rise. It appears Luna might end up leading her people—and all of humanity—after all.

So with hopes dashed at the doomsday bunker, but then renewed by Luna’s recovery, I’m upping our characters’ chances of survival to 20%. Keep in mind we’re now dealing with a shorter timeline, roaming bands of angry tech-smashing Grounders and Luna’s blood is only helping her at this point. But every percentage point helps, so go team go!

I have near endless predictions for what Luna’s recovery could mean for the show, but I’ll only throw out a few of my least outlandish theories:

— The radiation comes and destroys basically everything, and a motley crew of 100 Skaicru and Grounders have to make due in the Ark. A lot of people have to die, and Clarke and Bellamy become the harsh leaders they never wants to be. But now we get to see what life in the Ark was like in space, only this time we’re on the ground.

— Skaicru and the Grounders band together to patch up the Ark and reenforce the Second Dawn’s doomsday bunker, with special help from Jaha and his engineering knowledge. Almost everyone is saved, but now we have two groups in lock down for the next five years.

— Abby and Raven lead a team to help recreate Luna’s blood in synthetic form, which they start dolling out in vaccinations to inoculate people against the radiation. However, they are only able to make a small supply, which means they can only give it to 100 people! So, we’ll have 100 in lockdown, and 100 able to survive outside. That’s better than our previous survivor numbers at least. 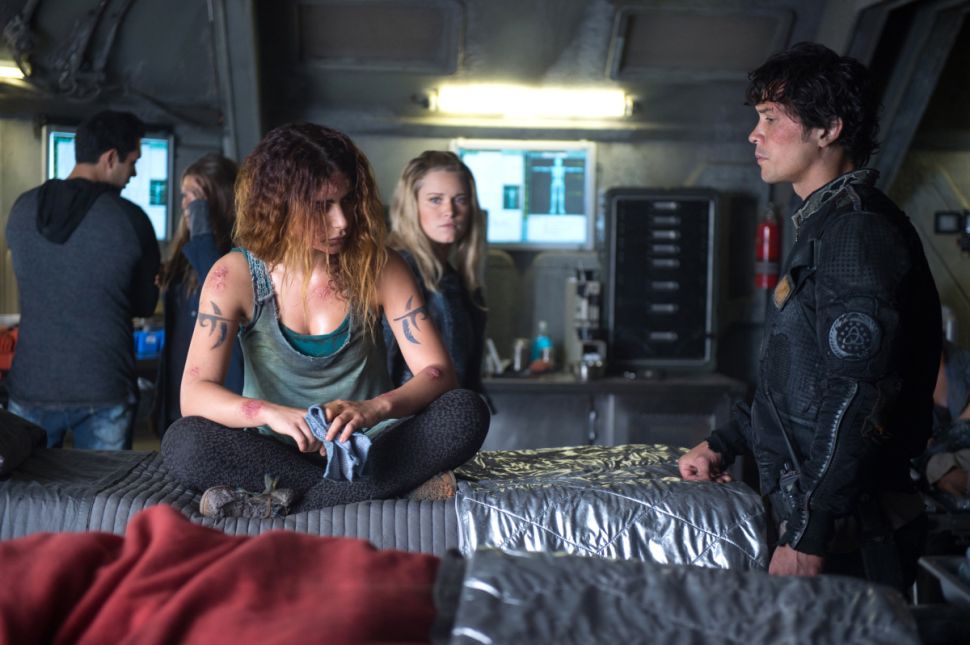