This week’s opening image of Jaha “floated,” helpless and stranded, in the center of a lake on a makeshift raft is an apt metaphor for what happens to characters who overstep their bounds on The 100. In the case of Jaha, who is always down to sacrifice the few to save the many, he’s become a pariah; demoted to a position beneath his abilities and blamed for a disaster that was only partially his fault. After making that depressing list of the 100 people who will get to survive the coming doomsday, Clarke finds herself in a similar, lonely position as her ostracized mentor. And yet again, for another week, we’re left asking the same question: will anyone on this show learn anything from the past? Clarke doesn’t have much time before the world goes up in flames, so it’s now or never Wanheda.

“What’s with the ‘we’re all gonna die face’?” Monty asks Clarke after Jasper has had his fun and tows Jaha back to shore. Everyone is well now that the end of the world is on its way, and Skaicru is plenty busy making preparations to patch up the Ark, but Clarke’s decision to keep the list a well-guarded secret is weighing on her, along with her drab duties as defacto leader. (Can anyone believe she’s actually complaining that she has too little to do but order people around?) Like a bad omen, the sky starts to rumble, ready to open up and spill the first black rain on Arkadia, and everyone runs for the Ark. All except Jasper, who is ready to meet his fate head on. The rain comes, Jasper opens his arms to the sky, and after a dramatic few seconds of playing dead, he assuages everyone’s fear by confirming that’s it just raining harmless regular . “When did everyone around here lose their sense of humor?” he yells at his understandably pissed off friends. (I’d say right around the time Clarke told everyone the world was ending.)

But Jasper isn’t done joking around. He and Monty plot to prank the oh-so-serious Clarke in Kane’s office, and in the process accidentally stumble upon the list. Jasper, who has already committed himself gleefully to the idea of dying, is still horrified at discovering Clarke’s plan. And big surprise! Monty isn’t on the list, and neither are Harper and Riley. But just before Jasper can spill the beans over the radio to Arkadia, Clarke has him arrested. While Monty can accept that he’s not valuable enough to be saved he, like Jasper, doesn’t agree that Clarke should hide information the public. “You’re not God!” Monty tells her, before finishing what Jasper started and announcing who is on the list, name-by-name, over the PA system to camp. To be expected, the public doesn’t take it well, and Clarke finds herself defending her choice of names in front of an angry crowd. But before things can get any more ugly, Chancellor emeritus Jaha intervenes to offer up an alternative: a random lottery which would allow people at least a partial hand in their fate.

“If you think you have the best idea, you have to convince people—not lie to them,” Jasper tells Clarke, after she frees him from the Ark’s prison cell, and he dubs her “Jaha-light” for attempting to emulate their iron-fisted, former leader. “When Jaha is looking reasonable, it’s time to reassess,” he says. This week, Clarke learns her lesson the hard way, and gets a small taste of the public shame that so often comes along with condemning the innocent to die. But with the list replaced with a lottery (for now at least) the problem of saving everyone still isn’t solved. There’s still the tricky task of scrounging up enough nightblood for everyone.

Bellamy, Raven and Abby are on the case, and leading a team on a mission to Becca’s island, where she allegedly stored the recipe for creating nightblood in her laboratory. The plan for now: create enough nightblood serum to make everyone effectively immune to radiation, just like Luna. Also along for the ride are Murphy and Emori, who are working on a side hustle to stock the island’s bunker with enough supplies for two, where they’ll ride out the end of the world together if Skaicru’s plan falls apart. And last but not least, Nyko and Luna have been brought along for safekeeping. As always, Luna is suspicious of Skaicru’s motives, and is eager to escape the burden of leadership that being a nightblood has bestowed on her. “They think my blood will save them,” she tells Nyko. “What do you think would happen if I said they couldn’t have it?” Since she was introduced last season, Luna has been one of the show’s most promising characters, but she’s been quick to avoid a leadership role at all costs. So it’s especially frustrating to watch her continue to wrestle with the same quandaries this season. While I might commend her for opting out of war, it’s hard to make sense of why she might dismiss the chance to save the human race all because she doesn’t want to give a little blood.

Even though A.L.I.E. is gone, the island is far from safe. Becca’s lab is tightly guarded by armed drones, and Skaicru’s search party is attacked the moment they step off the beach. Nyko is killed in action saving Luna (No!!) but his death isn’t for nothing: Luna knows she (and her blood) are special, but his sacrifice may have been enough to sway her, along with some choice words from Raven (“It’s not your blood that defines you, it’s your heart”), that she is humanity’s best hope for making it. With renewed purpose, Luna and Raven mount a tag-team effort to dismantle the drones, and the party pushes through to Becca’s fabled lab. And while the pristine facilities inside are promising, we can always count on Murphy to burst our bubble: what was it those drones were protecting the lab from again?

While Skaicru is busy working on the “solution” they promised King Roan, Polis is teetering on the brink—and so is Octavia. “Justice and vengeance are not the same thing,” Marcus tells her, in a lecture about how warriors should know when and when not to kill. He’s not too thrilled that she beheaded one of the tech-smashing Grounders, nor is he happy that she slayed Trishanakru’s ambassador and Pike. And at the tower, Roan has his own bone to pick with Marcus. He calls him to report on Skaicru’s progress with a plan to stop the end of the world, and isn’t pleased when he’s told they need more time. The sight of Bellamy and another Skaicru soldier bound and gagged are enough to motivate Marcus to tell Roan and Echo about the plan to synthesize and widely distribute nightblood, which Echo deems blasphemy before slitting the red shirt’s throat. Roan calls off their alliance and declares Skaicru and Trikcru enemies of the state. Now add a war with the Ice Nation on top of the pending nuclear holocaust, and Skaicru is looking at a two-story tall wave of bloodshed this season.

Azgeda wastes no time taking out Polis’ Trikru confederation, and Octavia barely escapes the city alive. She makes it as far the forest outskirts, on her way to Tondc to warn Indra and the rest of Trikru, before Echo intercepts her. The two warriors battle it out on the edge of a cliff, and Echo pleads with Octavia that she has orders to return her Roan alive. But in a shocking twist (and I won’t say devastating because it truly is an unbelievable scene) Echo puts her swords through Octavia and Skairipa tumbles over the cliff’s edge to her death. Take a breath, and just wait for it.

Echo delivers the news of Octavia’s death as softly as she can to Bellamy in the dungeon of the tower, but her brother predictably crumbles in what is a remarkably heartbreaking scene. Bellamy is, next to Clarke, the show’s emotional rock, and he would more readily endure pain in silence than shed a public tear. But if his character has an Achilles heal it’s always been Octavia, and it will undoubtedly have an impact on Bellamy and his will to fight the battles ahead. And there will be battles aplenty: the Ice Nation is already gathering its forces with plans to march on Arkadia.

But The 100 wouldn’t be one of TV’s best sci-fi shows—which it is, and I remain firm on this diagnosis and will defend it to anyone who wants to challenge me—without keeping a side of hope alive on the back burner. Behold! Octavia’s not dead yet. Come on 100 fans, did you really think it would be so easy to kill Skairipa?

Now to our survival odds: With Octavia still kicking, and the formula for a nightblood vaccine hiding somewhere in Becca’s lab, the future for the population of The 100 is looking pretty bright. I’m giving everyone a 35% chance of living to see old age this week, but no more than that because the Clans have still not managed to get over their petty grievances enough to avoid a useless war. Is Season 4 hitting to close to home yet?

— Raven’s dig at Murphy is forever on point: “You’re not fooling anyone Murphy, you’re still a dick.”

— How is it possible for Luna to be recovering from radiation sickness and have such an impeccable ombre? Someone tell me what this girl’s secret to “flawless end of the world hair” is?

— I have a sneaking suspicion that it’s not what’s lurking outside Becca’s lab we should be worried about, but rather what’s inside. 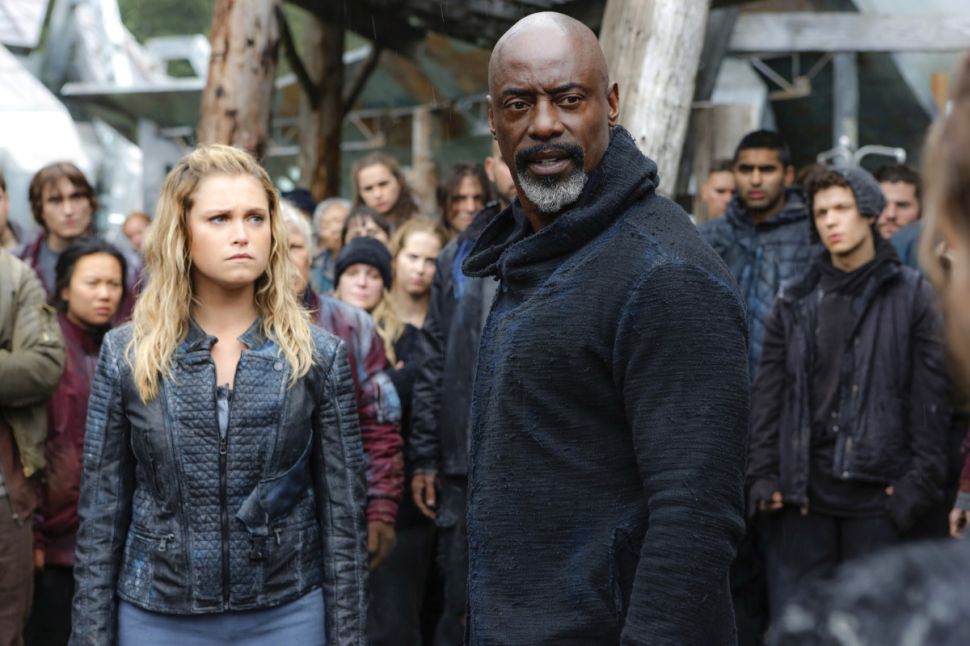