The future is bleak, and not just for everyone here in 2017, but especially for the characters of The CW’s fantastic post-apocalyptic sci-fi drama The 100. This season, the world is ending—quite literally. If nuclear holocaust didn’t wipe out humanity the first time it hit 100 years ago, then the second time’s maybe, most definitely, going to be a charm.

If you’ve been keeping up with The 100, then you already know that that it’s perhaps the best sci-fi on television right now—and I’m not the only one who thinks so. Let’s lay out why: after beginning our story with a whopper of a moral quandary (risk the lives of 100 kids who were going to die at some point soon anyway by sending them down from space to a possibly irradiated Earth to test the air quality and see if it’s habitable) the show wasted no time pushing past its more frivolous teen drama subplots and into serious, socially relevant storytelling. Our young heroes have negotiated peace and war with the Earth’s Grounder population, taken out the oppressive military regime at Mount Weather, sacrificed loved ones (RIP Lexa, you are not forgotten) and destroyed an all-powerful AI. And most importantly, while the show’s younger characters quickly took up the mantle as its leaders, the adults haven’t been relegated to merely supporting roles. As Marcus (Henry Ian Cusick) tells Abby (Paige Turco) at the end of the season premiere, “The youth have inherited the Earth.” Indeed they have. Too bad, as she aptly points out, that “now they have to save it.”

Which leaves us here and now: at the end of last season Clarke (Eliza Taylor) pulled the plug on A.L.I.E., the AI that destroyed the Earth the first time and attempted to imprison its current population in a simulated city without pain. (Black Mirror’s “San Junipero” episode was widely praised for exploring how virtual reality can be both a blessing and a curse, but The 100 went there first.) Now, everyone’s experiencing a painful return to the real world, and Clarke is understandably hesitant to add to their sorrows by telling them that World’s end part two is only six months away and there’s no chance of stopping it.

Domestic Strife
“Looks like saving the world will have to wait,” Bellamy (Bob Morley) tells Clarke at the start of this episode. That’s because just moments into the show, the Ice Nation led by Echo (Tasya Teles) stages a coup and takes over rule of the Grounder’s capital city of Polis. There’s little hope this new administration is open to keeping Lexa’s policies in place either: Echo slits the throat of one of the coalition ambassadors to set the tone that she’s not open to sharing power between the Clans. Add to that the fact that the Ice Nation’s king, Roan (Zach McGowan) was gravely injured trying to help Clarke in the events of last season’s finale, and he may be Skaikru’s only ally within the city. Abby volunteers to save him, but Echo refuses, blaming the death of Ontari (the Ice Nation’s nightblood, and Polis’ brief leader) on Skaikru. For their crimes, the group isn’t allowed to leave the city.

Now, just because we’ve saved the world before, doesn’t mean anything we tried in the past is going to work this time around. Trikru’s leader Indra (Adina Porter) is eager to fight the Ice Nation out of Polis, but Clarke proposes a more clever strategy: surrender. Well, at least they’re going to pretend to; it’s all a cover for sneaking Clarke and Abby into the tower to save Roan with a clandestine surgery, while Bellamy fake-negotiates terms of surrender with Echo.

This episode features some spectacular, and violent (right up there with recent episodes of The Walking Dead), sequences. Octavia (Marie Avgeropoulos) continues to step into the spotlight as one of the series’ most vital and exciting characters. She’s still filled with rage over the death of Lincoln (Ricky Whittle), and is subsequently putting her abilities as a fighter to the test while trying to find her place between Trikru and Skaikru—she’s never really fit with either group. That’s OK, having at least one character that doesn’t easily fit the mold is par for the course on this show.

Rebuilding Efforts
When Roan finally wakes up, he doesn’t jump to Clarke’s aid right away—her people did shoot him. He’s also got problems with his own clan: not everyone approved of the way he came to power by killing his mother and not killing Wanheda (Clarke’s badass alias among the Grounders). Roan’s war chiefs don’t respect him, Echo tells him. But Clarke has a win-win scenario for both of them, one that will keep her people alive for the time being and buy them time to search for a solution to the pending apocalypse. So, she offers up her only bargaining chip, literally—the Flame, a.k.a the AI that was in Lexa’s head. With the Flame in his possession, Roan will get to control who ascends to the rank of Commander, ideally someone from the Ice Nation, and he’ll gain the respect of all the clans. “An attack against Skaikru is an attack against us all,” Roan announces to the people. For now, our group has found an ally in the race to save humanity.

Anti-Skaikru sentiment is spreading like wildfire through Polis, as the Grounders blame Clarke and her band for the disaster that occurred in the City of Light that has left so many of their people dead. “You just gave them back their pain, let’s not add to it by telling them they’re going to die in six months,” Bellamy tells Clarke. Like Battlestar Galactica before it, The 100 is peppered with eerily similar moral dilemmas not unlike those we face in our own world. When is it OK to withhold information from the public? And when people already distrust their leaders, is partial honesty really the best policy? I’m hoping Season Four will provide some answers.

Of all our characters, Jaha is perhaps in the most precarious social situation. After all, it was he who seduced the people into the City of Light, and that didn’t end well for anyone. This week, he’s asking himself, somewhat rhetorically, “What have I done?” His character has really struggled to find his place since landing on the ground, and his inability to move past a “for the greater good” leadership attitude isn’t a good fit in this new world. This season, it would be refreshing to see him finally accept the challenges that are right in front of him without resorting to the most extreme actions on the table, and put his past experience as Chancellor to good use by nurturing the next generation: Clarke and crew.

Personal Baggage
“Can I plead the chip?” Jasper cleverly quips to Harper, Monty and Raven back at Arkadia, apologizing for his actions at the end of last season in the City of Light, where the other half of the Scooby gang all nearly met their end. “Is it weird that I want to go back in?” he adds, vocalizing a sentiment that is haunting many characters this season. “There’s nothing like a little pain to remind you you’re alive,” Raven tells him. Recovery after returning from a land without pain is more complicated for some, especially characters like Jasper and Raven who have both lost people close to them. And while Raven chooses to cope by throwing herself head on into the team’s challenge (stop the Earth’s nuclear reactors from melting down), Jasper is ready to opt out and commit suicide. But then Raven reveals the apocalypse news, and Jasper’s reaction is the most realistic of anyone thus far: He pulls out a gun, laughs maniacally, and declares “I’m going to watch the sun rise.”

The most emotionally revealing moment this week comes from an exchange between Abby and Clarke, when she admits to her mother that she loved Lexa and her mother acknowledges her grief. It’s both a nod to the many fans who were outraged over Lexa’s sudden death last season and an example of how real the stakes are for our characters; they too must mourn, freak out and only then can they gather strength for the fight ahead.

By the end of Episode 1, we have a solid plan in action. Marcus and Abby plan to stay in Polis to keep the seat on the coalition, and Bellamy and Clarke are headed back to Arkadia. I can’t emphasize enough how much I love this show, and how much I feel like it so perfectly combines the moral quandaries of society with the complexities of human emotion on screen, through a balanced cast of adult and teen characters no less. Of course, The 100 is not without its issues (remember when it killed off one of television’s most visible, and strong queer female characters in brutal fashion?), but is pretty much everything in our own world. It’s all a big fucked-up mess, and there’s only one thing we can try our damnedest to do: survive.

— Marcus and Abby could be a stabilizing political force, both in Arcadia and Polis, if given the chance. Let’s just take the spotlight off their budding romance for a bit.

— Jasper has been really flailing since the incidents at Mount Weather. My hopes are that fighting the coming apocalypse will give him a new lease on life.

— Please, will someone intervene and knock Raven’s physical and mental anguish down a notch. She’s a genius, and apart from deserving a break we really need her at her best this season to, you know, save us all.

— Murphy will continue to tell it like it is. His no bull-shit meter will be a handy canary in the coal mine when the radiation cloud becomes visible on the horizon.

— If the last image of the show is any indication (a woman being vaporized by said radiation cloud) deaths this season may be really painful to watch. 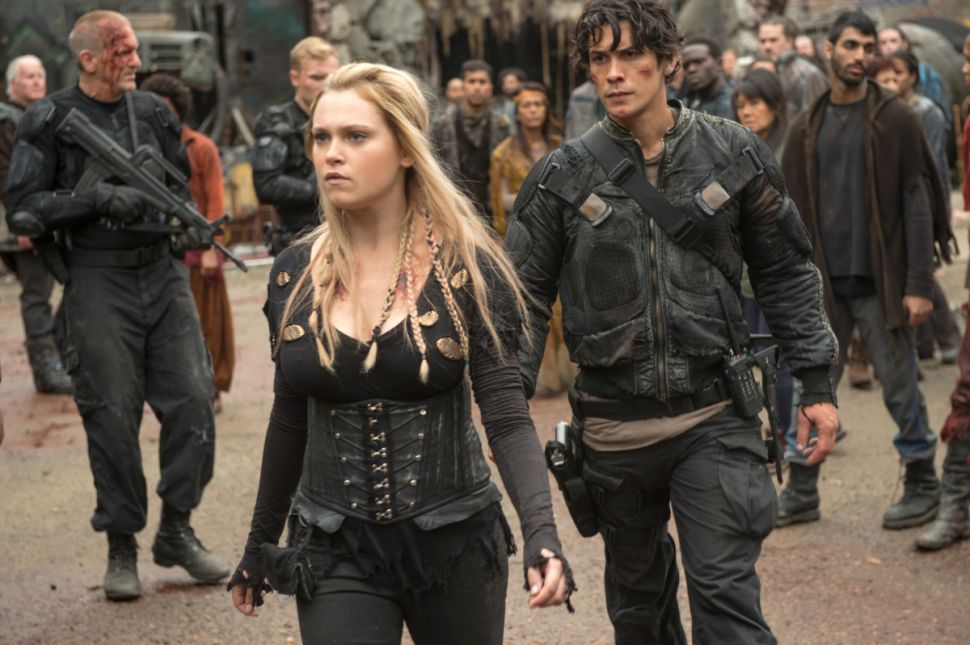