As the September Democratic primary and November general election loom ahead, and corruption probes continue to haunt him, Mayor Bill de Blasio used his third State of the City address to return to the themes of inequality and unaffordability that got him elected four years ago—and to promise a push for the creation of “good-paying jobs” across the five boroughs in the upcoming decade.

The mayor promised the audience packed into Harlem’s Apollo Theater that this year’s speech would not follow a boilerplate formula of reducing the city’s situation to simplistic sentences summarizing his policy accomplishments. He then proceeded to do exactly that.

“If you said to me, ‘talk to me about the state of the city in terms of public safety,’ I’m proud to say, I would say to you, ‘the state of the city is we are safer than we have ever been,'” he told the crowd, highlighting low crime rates, the implementation of his neighborhood policing program and his deal with the largest NYPD union to equip the entire patrol force with body cameras by 2019. “If you said to me, ‘let’s talk about education,’ I would say, ‘well, the state of our schools is stronger than any of us I think could have imagined.'”

The mayor highlighted the two years of rent freezes in regulated apartments, courtesy of his appointees to the Rent Guidelines Board, the increased high school graduation rate and the precipitous drop in the police force’s use of the stop-and-frisk tactic. But de Blasio acknowledged that cost of living remains astronomically high, while wages at the low end of the earnings spectrum remain weak.

“Everything we’ve been doing so far is necessary, I believe it’s right, but it’s not sufficient,” he said. “This city simply must do more and must do it quickly.”

To that end, de Blasio rehashed several proposals he revealed in the lead-up to the speech, including lobbying Albany to instate a so-called “mansion tax” on sales of properties worth more than $2 million, in order to pay for a new rent subsidy for the elderly—a certain nonstarter in the capital, given continued Republican dominance in the State Senate. Nonetheless, the mayor insisted “if we speak loudly, Albany will listen,” and pointed to the recent passage of minimum wage and paid leave legislation

At no point did he acknowledge those measures cleared the upper chamber of the State Legislature in large part thanks to Gov. Andrew Cuomo’s then-warm relationship with State Senate Majority Leader John Flanagan, which has since grown frigid.

Another idea the mayor previewed in advance, granting taxpayer-funded legal counsel for all tenants in housing court, stands a much better chance of passing, since it needs only city approval to move forward—and since the mayor himself has long been the main obstacle to its implementation.

He also announced he would allocate an extra 10,000 of the 200,000 units of affordable housing he aims to create by 2024 for households earning $40,000 or less, a seeming sweetener for activist skeptics who viewed his massive rezonings as a giveaway to developers.

A few dozen such disenchanted constituents demonstrated outside, carried pickets comparing de Blasio to President Donald Trump and the Monopoly man and exhorted those standing on line along 125th Street not to trust the mayor and his promises. A number objected to the administration’s plan to plant privately managed apartment complexes on New York City Housing Authority land, which de Blasio has insisted is the only way to bring the troubled public landlord back toward solvency. Others urged the closure of Rikers Island.

The mayor also re-upped his two-and-a-half-year-old plan to retrofit private and public buildings to reduce their energy intake and carbon output, a plan he claims will create an estimated 30,000 “green” construction jobs. This was part of a bigger vision to create 100,000 high-skill, high-wage positions in an array of sectors across the city.

“This new addition, this new focus on creating more and more good-paying jobs, this will be the new frontline in keeping New York City affordable,” he said, promising work in film and TV, tech, life sciences and “advanced manufacturing,” paying $50,000 to $75,000 a year or more.

De Blasio said the Brooklyn Navy Yard would birth 10,000 such positions, while he announced a plan to turn the Bush Terminal/Industry City complex in the neighborhood of Sunset Park into a “Made in New York campus,” a “new hub” for the fashion industry. The mayor is set to visit the location tomorrow.

Notably missing were new solutions to reduce the record-obliterating number of families now living in homeless shelters, which has provided considerable grist to de Blasio’s critics. The mayor did promise, however, that he would unveil such a vision “in the days to come.”

But the mayor clearly did not intend the address to focus on hard details or clear implementation plans. Rather, it was a pitch to the city as he seeks another four years in office, making a play that worked before.

“This affordability crisis threatens who we are. It threatens the very soul of this city,” the mayor said. “My message to all New Yorkers tonight is very simple, and I hope very clear: this is your city. This is your city, you helped make it what it is. And it is up to us to protect it.”

“This country is ours. It belongs to all of us. And this is our city. Thank you,” he concluded. 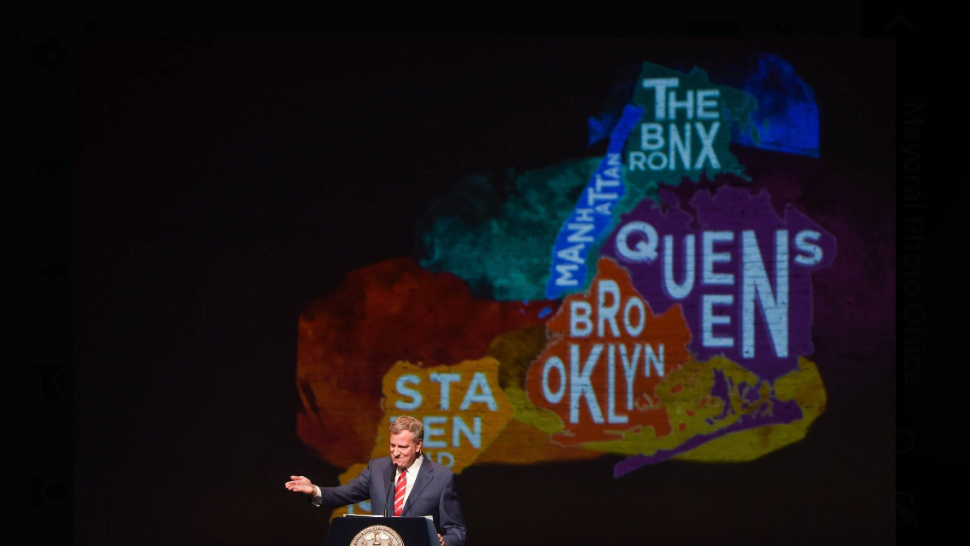