Released to reporters a few hours before the mayor approached the podium at the Federation of Protestant Welfare Agencies in Lower Manhattan, the plan expends thousands of words laying blame for the crisis on the mayor’s predecessors, with one chapter entitled “20 Years of Rising Homelessness.” Meanwhile, the glossy brochure’s list of “Milestones in the Fight Against Homelessness in New York City” begins in 2014, de Blasio’s first year in office.

“For decades, the city has not done enough both these New Yorkers [sic] and the communities where they are sheltered,” the introduction reads. “The de Blasio Administration is using every tool at its disposal to address homelessness.”

The outline commits even more space to rehashing the administration’s “tremendous progress” so far: highlighting the “ahead of schedule” plan to create or preserve 200,000 below-market units;” the HOME-STAT program to get people off the streets and into shelter and to pair them with a social worker; and its federally certified success in ending “chronic veteran homelessness.” The administration even pats itself on the back for keeping the shelter population from reaching 70,000, even as it shattered the historic 60,000 mark.

The largest unique piece of the plan revealed today is a call to open 20 new shelters this year and 20 new shelters next year, building toward a goal of opening 90 such facilities over the next half-decade. The mayor aims to close 360 so-called “cluster site” shelters—the troubled private apartment buildings where the city pays to put up indigent families—by 2021 and discontinue the use of motels as shelters by 2023.

However, the mayor admitted the push to close cluster site shelters will require the city to continue lodging individuals and families in commercial motels, and even to temporarily increase its use of such facilities.

Ultimately, this will mean a 45 percent reduction in the number of shelters citywide. Additionally, the mayor insisted, it will permit families to remain nearer to their native neighborhoods, school districts and personal “support network.”

The end goal will be that each area represented by the city’s 59 community boards will host shelters housing all of the homeless people originating there. The fewer indigents from a neighborhood, the smaller its shelter will be: suggesting that poorer neighborhoods will continue to accommodate more homeless people than middle-class and wealthy communities.

The remainder of de Blasio’s plan consists of various forms of outreach: from the city to communities where it seeks to site new shelters, and from public facilities like hospitals and libraries to indigent individuals who spend time there. The former, the mayor maintained, will reduce the resentment and rancor that has thus far characterized the administration’s efforts to house the homeless in residential areas.

The city clashed bitterly with the community of Maspeth over a since-scuttled plan to convert the neighborhood’s Holiday Inn into a shelter for families. Protesters picketed the home of Department of Social Services Commissioner Steven Banks, who met with reporters after the event.

The mayor said the city would set up Community Advisory Boards for each site after each one opens. The advisory boards will hold regular meetings with the community to ensure that any community concerns pertaining to the facility or the surrounding area in the community are addressed as they come to light. But he warned that he would not give residents veto power over any incoming facility.

“That doesn’t mean if there’s protests we will change our mind,” the mayor said. “We’re going to ask each community board to do their share.”

Combined with a “comprehensive” drive to improve conditions in existing shelters, de Blasio vowed this program will result in a cleaner, safer system, more palatable to locals. He added that the city would encourage those staying in shelters to remain indoors during the day, so as to participate in education and job training initiatives.

On top of that, the agenda unveiled today rehashes the mayor’s commitment to funding free legal counsel for all New Yorkers facing eviction in housing court, and to allocating an additional 10,000 of the apartments in his existing housing vision to tenants with the lowest incomes. It also revisits the idea of creating a new Elder Rent Assistance initiative and funding it through a “Mansion Tax” on sales of homes worth more than $2 million—an improbable proposition, given that any new levy would require the approval of the Republican-run State Senate.

These measures, the mayor asserted, will stem the flow of families into the system. Meanwhile, the administration will rely on existing rehousing programs and a new initiative to obligate buildings receiving the expired 421a exemption to take in homeless families to reduce the current population by 2,500.

The mayor acknowledged in his speech that this was an underwhelming number.

“Is it a glory-ful goal? Is it everything we want it to be? No. It’s the honest goal. We want to surpass it, and with your help we aim to surpass it,” he said. “But this is what we can tell the people of New York City can be done and can be sustained.”

Director Dean Fuleihan of the Office of Managment and Budget told reporters afterward that the city would allocate $300 million in capital over five years to convert existing buildings to shelters and to construct wholly new ones.

This story has been updated to clarify what the community advisory boards are set up to accomplish. 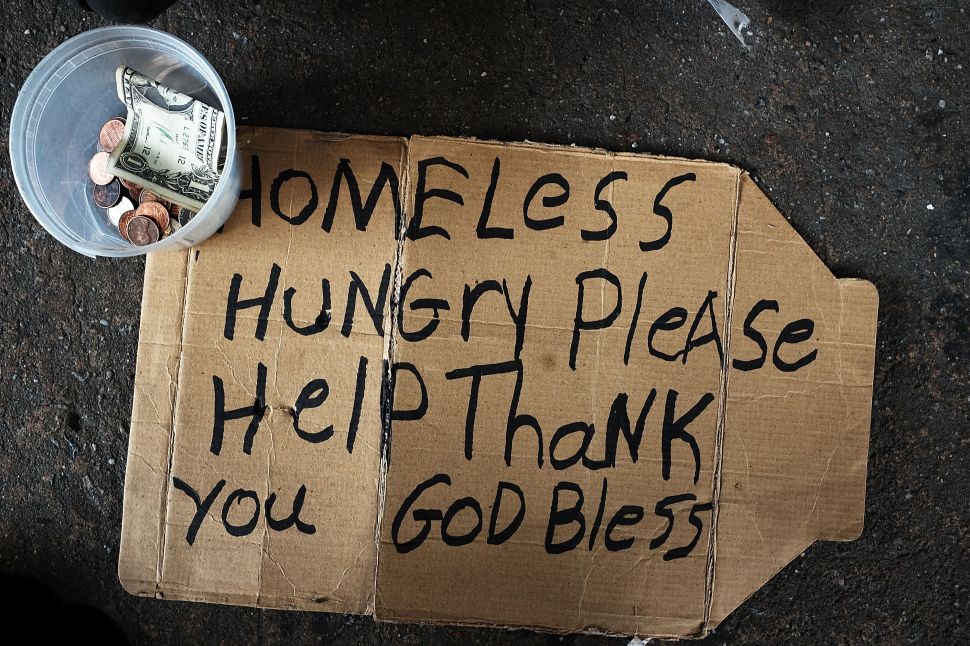