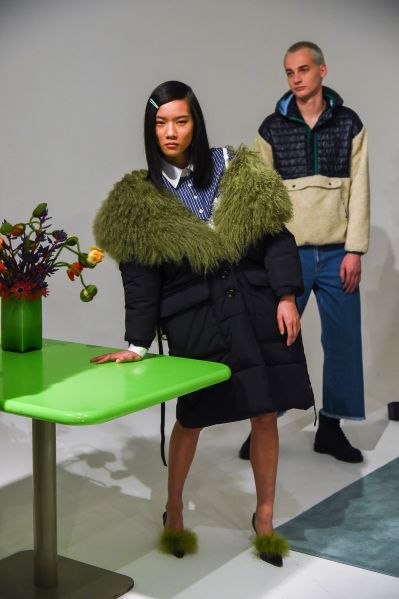 Since she launched her brand in 2014, designer Sandy Liang has taken inspiration from everything to the Lower East Side skater kids to the eclectic style of Chinatown grandmas. Featuring a mix of quirky coats covered in pink fur, embellished denim skirts and reworked gingham shirts, her clothing is playfully feminine and incredibly easy-to-wear.

Before her New York Fashion Week presentation on the Lower East Side this past weekend, we caught up with the designer—who has figured out how to create the perfect fashion girl coat—by phone. “When I started, I mostly did outerwear, but this collection has lots of ready-to-wear as well,” said Liang of her dresses printed with fruit, shearling trimmed puffers and velvet slip dresses trimmed in crystals. “When people ask me what’s my inspiration, it’s always the same girl, same attitude, but just different. I feel like the clothes are very much in tune with my personal aesthetic, because I’m basically designing clothes that I want to wear, which is why I love going to work everyday.” 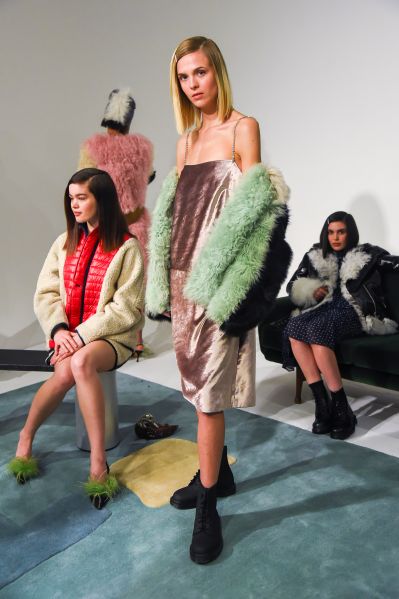 Here, we posed a few more questions to the native New York designer.

Each season, you always create amazing coats. Tell us a bit about the coats you did this season.
We did a lot of puffers this season. I started with my first puffer back when I did my fall 2014 collection. I feel like now, they’ve become such a trendy anti-fashion but really fashionable thing, which is kind of annoying but at the same time, whatever. It’s just about reinventing it and finding my own way to love it. The coats this season are really fun. I love when we’re casting models, and they come in and try on the coats and they just start giggling. It’s like, ‘what am I even wearing?’ but at the same time is really important for me—can I wear this coat to Whole Foods and not feel like a weirdo? These are like cool, funny coats for everyday.

You’ve done a lot with pastels in the past. What kind of color palette are you moving towards this season?
When I first started, people saw me as the designer who was just doing pink fur and pastel colored furs. But that’s now what I’m about. I’ve always been a fan of mossy green, and I was really into green last season. I saw [The New York] Times article about how green was the Pantone color of the year, which super bummed me out, because it’s not like I want to be on trend. But at the same time, it doesn’t hurt. This season, it’s bits of green here and there. 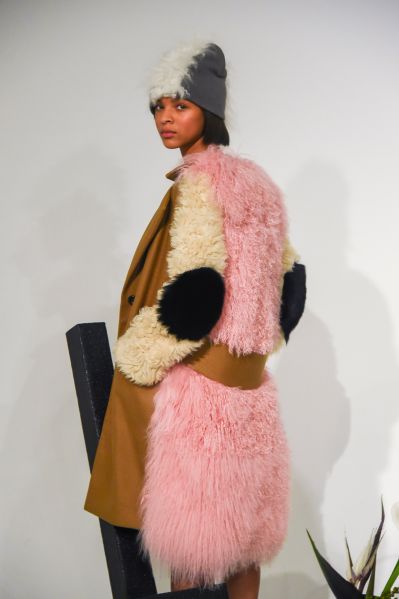 The designer kept her signature pastel pink in this Fall/Winter 2017 range. Getty Images

If you had to choose a favorite piece from this collection, what would it be?
There’s one skirt that’s like a G-string skirt with velvet. It’s like the illusion that you’re wearing a Swarovski G-string; that’s really funny to me. And then, I have this fruit print I’m obsessed with. Then there’s a navy and white piece that looks like a vintage polka dot print, but mine, if you look up close, instead of circles, it’s little tampons and puffy Cheetos. We call it the ‘PMS kit.’ But from far away, it doesn’t look like it. So we’re not offending anyone.

New York has always played a big role in your collection inspiration. How did the city inspire you this time?
It always continues to inspire me. I live two blocks away from my studio. I walk around all the time. My family has been here since before I was born, so it has everything to do with it. I don’t work with a big team, it’s basically just me designing everything. I have two other girls that help me with other things. 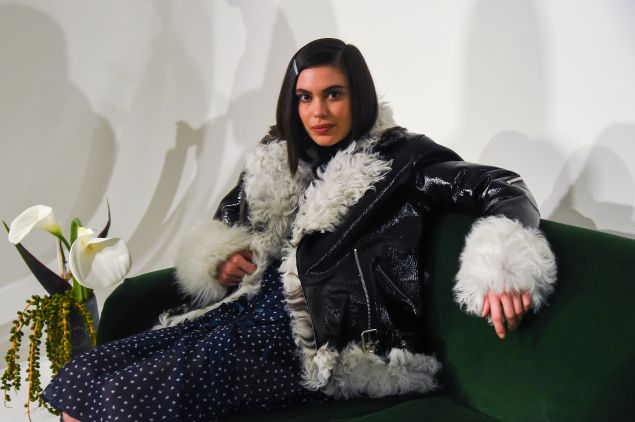 Your studio is in the Lower East Side, where you also live. Do you try to explore other neighborhoods?
I love getting away on the weekends. I just like taking little trips. I went to Maine recently, Philadelphia. I’m the worst American. I was born in raised in New York City, but I’ve been to maybe five other cities in the United States. I’ve only ever been to Miami and Boston. Even just for me, driving home to Flushing where my family is on the weekend is a big enough weekend.

Did you always know you wanted to be a fashion designer?
Yeah, pretty much. Growing up with strict Asian parents, they sort of make you feel like it’s not a real job. When I went to RISD, I went there with the intention of studying architecture, but it took me going there to be like, ‘oh my god, this is not what I want to do.’ I’m kind of happy that I was such a brat about it and got to do what I wanted. 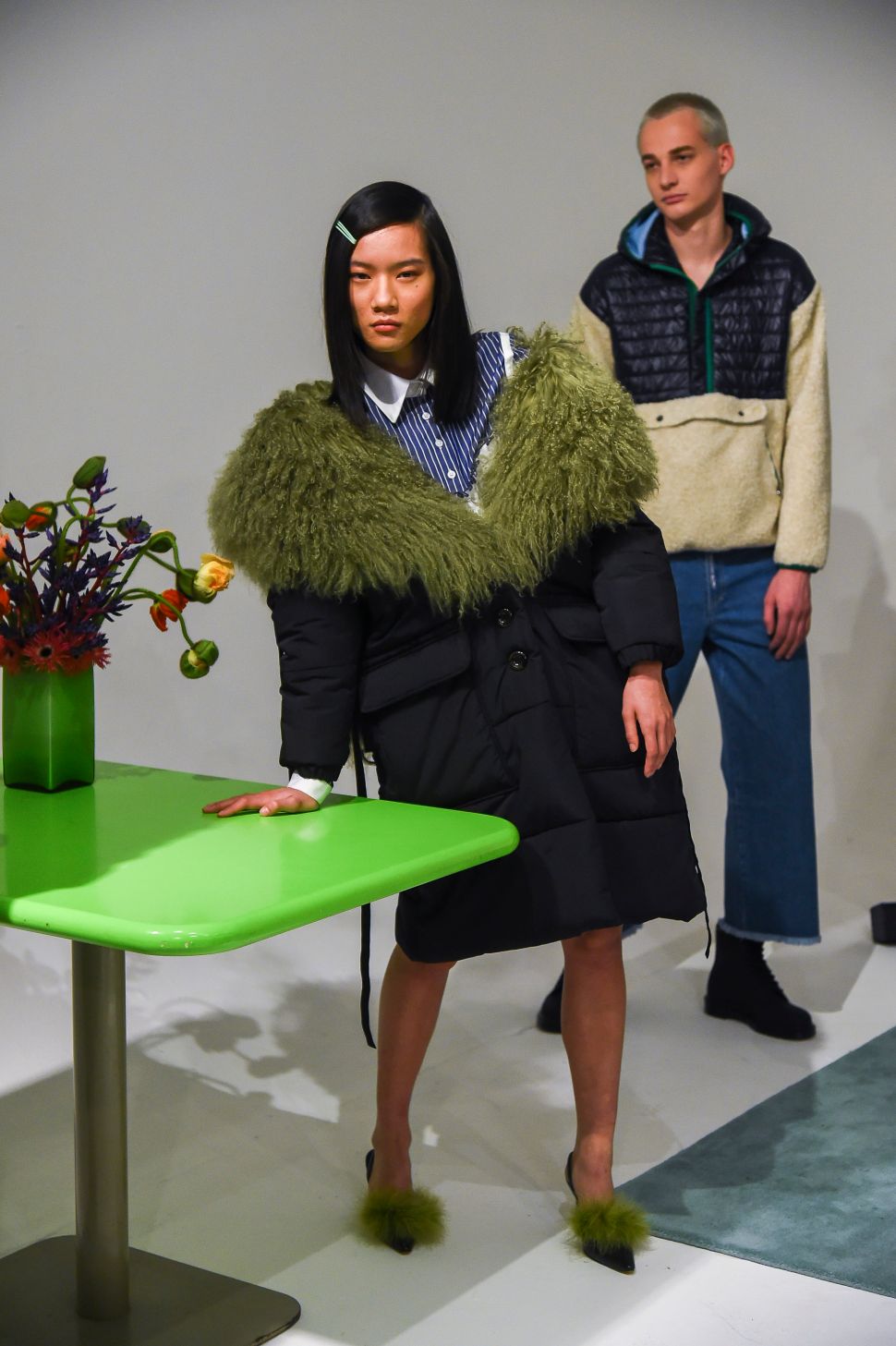