The voice of the devil belongs to a 24-year-old Englishman who just failed his driving test.

That devil is @s8n, and the man behind the boisterous Twitter account is Michael. Since inheriting the dormant Twitter account from an acquaintance in 2015, he has amassed more than 200,000 followers thanks to a hilarious mix of topical musings, demented life advice and more recently, President Donald Trump’s rise to the top of American politics. For Satan, Trump has become a very relevant comedic gold mine.

“I just use the hatred of Trump to my advantage really because everyone refers to him as Satan or Satan’s son, so I tried using that to my advantage to get a huge reaction from my tweets,” Michael told the Observer in his first formal interview.

Please stop running for president, I need you back in hell where you belong @realDonaldTrump

I miss you son @realDonaldTrump

Michael’s humble English upbringing is the exact opposite of what you’d expect the Prince of Darkness’ doppelgänger to have. His father worked for a bed manufacturer and his mother was a cleaner. The family attended church once in a while but wasn’t very religious. His favorite comedian is Scotland’s Frankie Boyle, who is best known for stirring up controversy. He works in retail and took his driving test Feb. 9 for the first time in a Mini.

Michael started tweeting from @s8n in July 2015. He approached each tweet as if the devil himself was thumbing a cell phone while walking the planet among us. This style was an immediate success. On Aug. 18, 2015, Michael’s first Trump-related tweet was retweeted 157,000 times and posted on Tumblr to the tune of 255,000 notes.

Are you coming home for Christmas this year? @realDonaldTrump

A fellow Twitter user who’s also seen his tweets gobble up mounds of attention is Jonathan Sun, a doctoral student at MIT and comedian behind the popular @jonnysun. The social media darling believes Michael’s success is not just predicated on topical tweets.

“Parody accounts, by nature, are one-liners. Most are flash-in-the-pan, zeitgeisty one-liners that reflect something popular, immediate and viral, but some one-liners are evergreen,” Sun told the Observer over email. “‘What if Satan had a Twitter account’ is an evergreen one-liner for social media—it will always appeal as a parody account idea because Satan is a constant figure in society.”

Society’s endless fascination with good and evil—God and the devil—is timeless and newsworthy. A Facebook page dedicated to a wisecracking God on Facebook has more than 3.2 million followers and stirred up news coverage in early February when it lost its blue verified check mark. The God Twitter account, @TheTweetOfGod, once had more than 2.3 million followers before its founder David Javerbaum, who worked for The Daily Show with Jon Stewart for 11 years, called it quits. Javerbaum parlayed his social media laughs into real world dollars in the form of the book, The Last Testament: A Memoir By God and the play, An Act of God. Exposure to this sort of Twitter success is very new to Michael.

In January, Michael was approached by the hardware company TarDisk. The Boston-based startup offered a free flash memory drive for his Mac in exchange for a tweet. Michael obliged and hopes it’s just the start of such luck.

In the meantime, fans like Lucien Greaves, co-founder and spokesman for The Satanic Temple, hope @s8n “helps people to laugh more freely and mercilessly at superstition.”

“With an American theocracy leering just upon the horizon and the revival of mainstream paranoid Satanic Panic tales (such as the embarrassingly idiotic “PizzaGate” conspiracy theory),” Greaves said. “It’s more important now than ever that we can point at such unreasoned absurdity and laugh.” 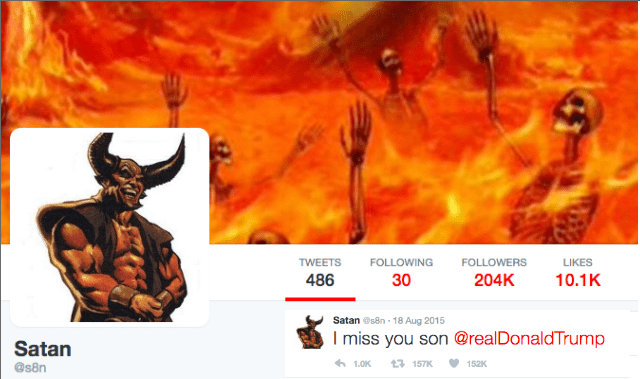