About two years ago, I attended ‘WWE’ Raw at the Barclays Center and discovered that to step under the big top of a pro wrestling event is to basically enter an alternate dimension, one where personalities are heightened, rules are broken and violence isn’t just allowed, it’s encouraged. Well, look at this, folks, it’s 2017 and we are living in that alternate dimension full-time. We have taken up permanent residence in bizarro land, sending the monthly rent checks to our landlord’s golden tower. Magical, miles-long walls are going to be built; lies are alternate-facts, and facts are #fakenews; the President is possibly a puppet and, even stranger, at one point in his life was on the receiving end of a Stone Cold stunner.

‘Stone Cold’ Steve Austin beat up the President of the United States.

The current, acting President of the United States, 45th in a line stretching back to 1789, took a Stone Cold Stunner in front of 80,000 people.

I still, to this day, to this very second, cannot believe this is a 100 percent, legitimate fact that will be published in history books for the remainder of time.

The year was 2007. The location, Ford Field in Detroit Michigan and the event: Wrestlemania 23. An on-going, on-screen storyline between Donald Trump, then just that Apprentice host with the weird hair, and WWE CEO Vince McMahon culminated in what the company dubbed the “Battle of the Billionaires,” even though McMahon is only occasionally a billionaire, and Trump still won’t prove he’s ever been one. But, whatever. Alliteration. I get that. What’s important here is the stipulation: Both “billionaires” chose a surrogate wrestler, those wrestlers would have a match, and whoever’s surrogate lost would have to shave their head. Trump chose Bobby Lashley, a man-mountain chiseled out of stone with the voice of a baby, while McMahon chose Umaga, a barefoot Samoan savage who…you know what, nevermind. Great pro wrestling is like a great joke: the more you explain it, the less it works.

Really, what you need to know is that Steve Austin, arguably the most famous wrestler in history not named after a geological formation, was the special guest referee, and ended this segment by giving Donald Trump the second worst Stone Cold Stunner in professional wrestling history.

Huffington Post published a great, lengthy read today detailing how this moment came together, and Austin himself has shared the genuinely bonkers backstage story on his podcast:

Vince [McMahon] went right over there, put Donald on the spot and right before we went out and goes, ‘hey, you know, Stone Cold Steve Austin is refereeing the match and he has a finishing move called the Stone Cold Stunner. Would you mind taking it?’

“And, boy, right then, Donald Trump’s number one advisor, his right-hand guy at the time, gave him every single reason why he does not need to take the Stunner. [He said] ‘Hey, man, this is not a good idea; you don’t need to do it; you’re doing enough by being here.’

Donald looked at Vince and he goes, ‘sure, I’ll take it.’

But it’s not really the “how” of it all that concerns me, it’s more the…fact it exists in the first place? For me, every single thing that’s happened in the past year, the unending circus show that was the 2016 election, the massive backlash, the constant lies, Sean Spicer’s real-time nervous breakdown, the Twitter wars, the walls, the racism, the fear, the unnerving and increasingly obvious ties to Russia, all of it, can be encapsulated in the phrase “Stone Cold Steve Austin beat up the President of the United States.” Because not only is that statement insane, it’s also a fact. The reality we live in is the middle of a Venn diagram of “insane” and “fact.”

In the year 2035, school children, in-between “How and Why God Created the Velociraptor 101,” will learn about Stone Cold Steve Austin, the only man in history to Stun both the President and a Cabinet member. That is just…oh man.

In fact, Trump’s close ties with the WWE (he is in the company’s Hall of Fame) led to a White House visit from not only the senior McMahons, but their son/occasional wrestler Shane, daughter/WWE Chief Brand Officer Stephanie and her husband/wrestler/WWE COO Paul “HHH” Levesque. This, of course, resulted in my favorite fun-fact of all time:

“Stone Cold” Steve Austin has stunned 46 percent of the people in this photo, including the president. pic.twitter.com/GKkz0cjB5d

Dear lord, what has become of this thing we call “real life”? Because right now, it definitely feels a whole lot faker than pro wrestling. 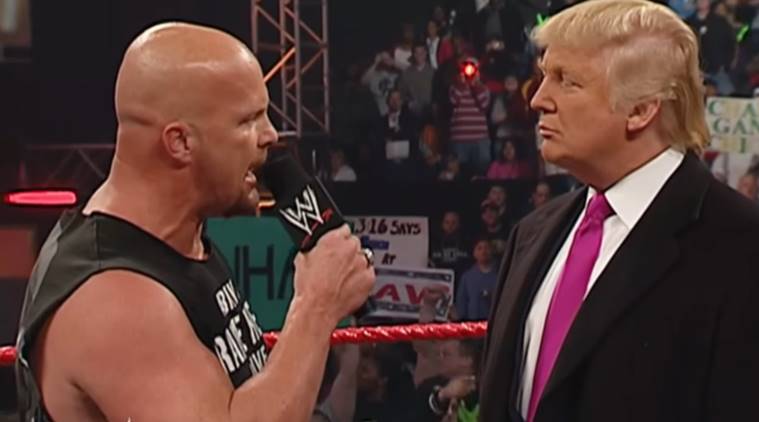