In the 1902 English short story “The Monkey’s Paw,” written in 1902, author W. W. Jacobs spins a yarn about a “Monkey’s Paw,” which will grant the owner three wishes. The possessor of the paw gets what he or she wishes, but not in the way the person wants. It could be the same for Donald Trump and the Republicans with Neil Gorsuch.

To explain the Monkey’s Paw, take the case of a couple who inherits the Monkey’s Paw and asks for a million pounds. The next day, their only son dies in a horrible industrial accident. Anyone care to guess what the insurance settlement comes to? The couple then wishes their son back, and he returns, looking and acting like a zombie extra from “The Walking Dead.”

With Neil Gorsuch, President Trump will get what he wants: a successful Supreme Court pick. Democrats are sure to try and block the nomination, enabling Senate Majority Leader Mitch McConnell to trigger the “nuclear option.” And Republicans get someone in the mold of Scalia.

Here’s how Gorsuch could be like the “Monkey’s Paw.”

After controversies over the executive orders, Trump’s Supreme Court decision looks like a winner. He gets a nominee that was overwhelmingly confirmed to his post in 2006. Gorsuch has the strong academic pedigree, as well as the judicial and legal experience to serve. His age and ability to craft long decisions should also work in his favor. He’s about the closest thing to a slam-dunk pick, barring some unforeseen scandal. His confirmation should be easy.

Keep in mind that Gorsuch clerked for Judge Byron White. Lost in the football analogy during Trump’s announcement was that “Whizzer” White was a Kennedy pick. Gorsuch also clerked for Anthony Kennedy, frequently cited as being far more moderate than what conservatives had hoped for when Reagan nominated him.

Also keep in mind that Gorsuch can be a separation of powers guy. That’s very different from a big government conservative that Trump envisions will help maintain his vision of government leadership from above. Someone like Chief Justice John Roberts would have been a better fit, the man who crossed party lines to uphold the ACA, because he agreed with the powers of the national government.

Wish #2: Democrats squander the filibuster in the confirmation battle

Shortly after Gorsuch was announced, my inbox filled with emails from liberal groups. Planned Parenthood, Democrats, interest groups and more are all spoiling for a fight. They’re hoping Democrats will filibuster the nominee, so Sen. McConnell can trigger the nuclear option and dispense with the filibuster, doing unto Democrats what Senate Majority Leader Harry Reid did unto them over Obama’s judicial nominees.

Though Democrats feel robbed that President Obama’s nominee, Merrick Garland, a well-qualified judge, didn’t even get a hearing from the GOP, they realize it’s one conservative judge replacing another. Sotamayor and Kagan were both confirmed because they replaced retiring justices from the liberal wing. Democrats should save that filibuster fight for when a liberal justice leaves the bench, giving the GOP a bigger headache later. Plus, as you’ll see in the next section, he’s not always going to back Republicans on all votes.

Wish #3: Republicans will get another Antonin Scalia

Ever since Justice Scalia passed away, Republicans have wished for another conservative. Over and over again, GOP stalwarts insist that the next nominee be of the mold of this beloved judge of the right, or so my pro-Trump and conservative emails tell me.

But was he always best for Republicans?

Scalia was known to vote for the principle of the thing, over party lines. He opposed flag-burning bills, as well as supporting the rights of Americans detained as suspects in the war on terror, among other issues where he and Trump clashed. He was more likely to promote an ideology that mixed libertarianism with a dash of religion.

But Gorsuch won’t do that. Or will he?

Even before he was named the nominee, Gorsuch was attacked by conservative outlets like “PJ Media.” Though they liked some of his more conservative rulings, in favor of Hobby Lobby and against assisted suicide, the knives were out. PJ Media quoted Andrew Schlafly as saying that “Gorsuch is not pro-life.” They also blast his place of worship, noting members use solar panels and marched after the inauguration. A libertarian voting record could follow next.

Of course these may just be idle musings. After all, a conservative nominated a conservative to a conservative legislature. It’s a no-brainer, right? It’s as easy as making wishes from an old lamp, a strange genie, or even a Monkey’s Paw. And history has showed us with Justices Kennedy, Souter, Brennan, and Chief Justice Earl Warren, the person who makes the pick doesn’t always get a member of the party faithful. 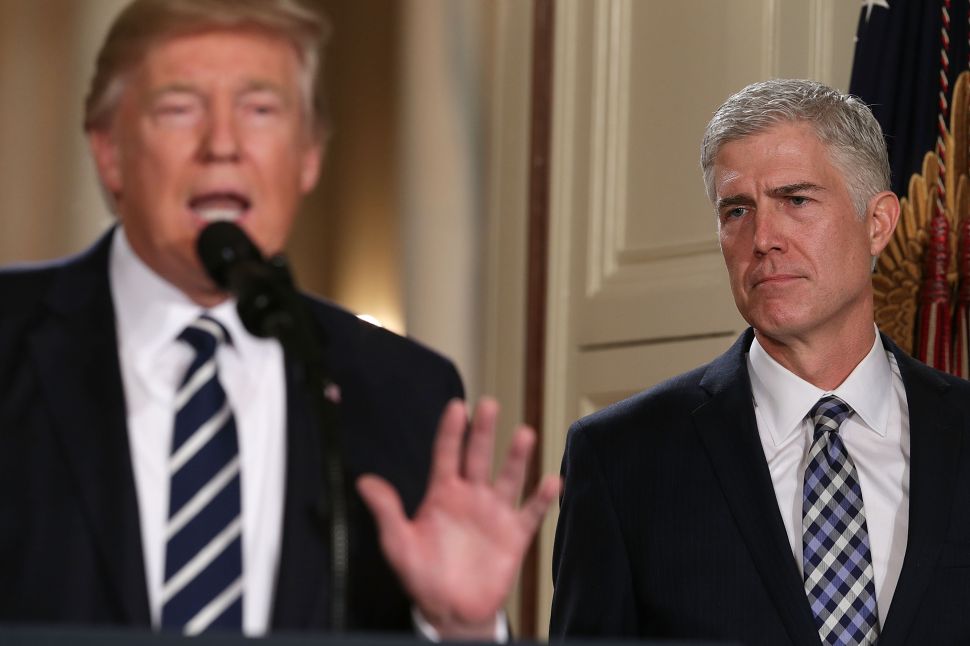